FALVEY MEMORIAL LIBRARY
Home Search Guides Help
You are exploring:  Library  >
Exhibits Home  >
A Great Thing for our People: The Institute for Colored Youth in the Civil War Era  >
Documents  >
Base Ball - Olympic vs. Pythian

Base Ball – Olympic vs. Pythian

Perhaps the first base ball game of the kind was played yesterday afternoon at Twenty-fifth and Jefferson streets. It was between the Olympic, white, and the Pythian, a colored organization. The latter acquitted themselves in a very creditable manner, especially their outfielders, who made several very fine fly catches. The crowd was the largest that has been on the ground for two years, excepting at the time of the Olympic and Cincinnati game, and until the last two innings was very orderly. Several officers were on the ground, but when, on the ninth innings, the crowd broke over the ropes, the officers made scarcely any effort to control it, except to hustle out a few of the smallest boys. The ninth inning was, therefore, played under great difficulty, and it was only with trouble that the scorers could see the game. The Pythians having won the toss, sent the Olympic to the bat at 2:45 P.M.

First Innings. – Olympic. – Kerns was retired by Catto taking him on the fly. Rorke was put out at first. Schaeffer making a run, Clinton ended the inning by sending an easy fly to Catto. Runs, 1.

Pythian. – Cannon and Catto opened auspiciously, each making a run. Clarke dampened their hopes by being caught napping at third, after making his base by a clean hit. Waters was enabled to make a run by risking much in running in, while Sparrow struck out, and Caverns tipped a fly to Rorke at short. Runs, 3.

Second Inning. – Olympic. – The whites saw that they had no easy job before them, and went to work with a will, and before the third man was out they added eight to their score. Severns, Lovett, Pollock, Kerns, Schaeffer, Rorke, Clinton and Miller, each obtained one run. Oram was taken on the fly by Hanley. Miller was put out at first, and Lovett struck out. Runs, 8.

Pythian. – Adkins was put out running to first, and Hanley was handsomely taken on the fly by Lovett. It looked much like a whitewash for the Pythians, but Walker got to first on three balls, and made his run through Pollock missing a fine fly sent him by Cannon, who also got in, not too soon, however, as Waters was soon put out at first, leaving Catto and Clarke on their bases. Runs, 2.

Third Inning. – Olympic. – This was the longest inning of the game, as by excellent batting Pollock, Schaeffer, Rorke, Oram and Miller made two runs each. Rorke and Severn both scored a home run apiece. The outs were Clinton, on the fly by Hanley, Lovett by Adkins, and Kerns by Cannon. Runs, 14.

Pythian. – This was their first whitewash, their men going out in rapid succession. Sparrow and Walker were taken on the tip bound, and Caverns on the foul fly, all by Miller. Adkins and Hanley were left on their bases. Runs, 0.

Fourth Inning. – Olympic – This was another display of good safe batting, and Kerns, Schaeffer, Oram, Clinton, Miller and Severn got runs. Rorke was taken on the foul fly by Clarke, while Pollock suffered two outs, one at first and the other at second. Runs, 6.

Pythian. – Affairs now looked bad for the colored players, but they made a gallant effort, and added considerably to their small score, but not enough to offset the proportion in the distance between the scores. Cannon, Clarke, Walters, Sparrow, Adkins, Hanley and Walker each made one run. Catto struck out, as did also Caverns, and Clarke tipped a foul bound to Miller. Runs, 7.

Fifth Inning. – Kerns and Shaffer were the only lucky ones this inning. Rorke was left on second by Oram being taken on the fly by Hanley, Clinton by Cannon, and Miller by Walker in one, two, three order. Adkins and Cannon, on part of the Pythians, changed places this inning. Runs, 2.

Pythian. – Waters, after making his base, was put out by Sparrow forcing him off first. Adkins was taken on the fly by Pollock, and Hanley by Schaeffer. Sparrow made his run. Runs, 1.

Sixth Inning. – Olympic. – Again were 8 runs made: Severn, Lovett, Pollock, Kerns, Schaeffer, Rorke, Oram and Clinton, each scoring by excellent batting, that of Severn being a home run, by a tremendous liner to the left. Severn and Lovett tipped fouls to Adkins, who was catching, and Miller was nicely taken at first. Runs, 8.

Pythian. – Another whitewash, the men going out in rapid succession. Walker and Cannon tipped fouls to Miller, who touched Catto, who made a desperate attempt to run into the home plate. Runs, none.

Seventh Inning. – Olympic. – To the astonishment of all, the whites were treated to a blank, which they did not apparently relish. Pollock and Kerns were put out at first, and Schaeffer tipped a foul ball bound to Clarke. Runs, 0.

Pythian. – Waters, Caverns, Eakins and Hanley each got a run, which was well received by their friends. Clarke was caught on the fly by Severn, Sparrow was put out at first, and Cannon at second. Runs, 4.

Eighth Inning. – Olympic. – Oram was the only man who got a run. Rorke was put out at first; Clinton sent a fly to Caverns, while Miller did likewise with Hanley. Runs, 1.

Pythian. – Another whitewash for the Pythians, the outs being Catto on the fly by Clinton; Waters at first, and Sparrow on the foul bound, by Miller. Runs, 0.

Ninth Innings. – Severn, Lovett, Schaeffer and Rorke scored runs. Oram was left on second. Pollock was caught napping at third; Clinton was put out at first by a ball to short stop, and Kerns tipped a foul to Clarke. Runs, 4.

Pythian. – A desperate effort was now made to reduce the disparity, and Caverns, Adkins, Walker, Cannon, Catto and Sparrow each contributed one run. Hanley tipped a fly to Severn, who also caught Waters, and Clarke was run out by Rorke, assisted by Severn. Runs, 6.

The score was as follows: –

The Expert and Olive Clubs played a game, yesterday, at Camden, resulting 44 to 8 in favor of the Expert.

The Keystone play a return game with the Nationals, or Norristown, to-day, at Seventeenth Street and Columbia avenue.

On September 3, 1869, the Pythian Base Ball Club of Philadelphia played the Olympic Base Ball Club in the first game between a white and an African American team. A number of Institute graduates played on the Pythians, led by their captain, Octavius Catto. While the Olympics won the game, the Pythians continued to be leaders in the effort to integrate baseball. 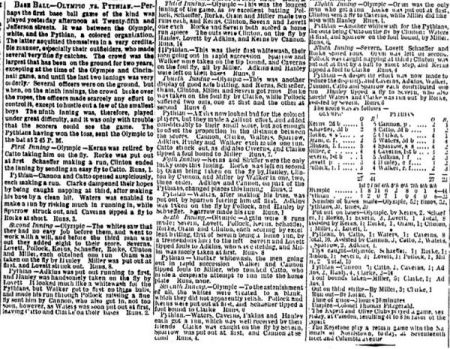