FALVEY MEMORIAL LIBRARY
Home Search Guides Help
You are exploring:  Library  >
Exhibits Home  >
A Great Thing for our People: The Institute for Colored Youth in the Civil War Era  >
Documents  >
Account of 1863 Graduation

The High School Examination.
The Christian Recorder, May 16, 1863

The examination of the pupils of the Institute for colored youth, came off last week. We are sorry that we could not be there on the occasion, as we had just returned home from visiting the Ohio and Baltimore Annual Conference. But we are told that the scholars acquitted themselves handsomely, as they usually do. We had the pleasure of being at the exercise on Friday.

The exercises were opened by the Chairman, Mr. Joseph S. White, of the Alumni, whose remarks were perfectly adapted to the occasion. He then introduced Mr. J.C. White, Jr., who arose and read a very important and interesting address, which we consider an effort on the part of Mr. White, that he need not be ashamed of. The next speaker was Rev. H.H. Garnett, of New York, who had been invited to deliver the Alumni oration. The distinguished orator came forward and said: Ladies and gentlemen of the Alumni, in appearing before you to-day to speak upon a subject which belongs to the department of literature, I am quite sensitive that I have of late been almost a stranger to the ground upon which I am to tread, &c., &c.

The subject was, The Scholar, His Field, and His Reward. Said he, this world is a school. Having shown in what light, by way of treating on the character and in speaking of the duty of the scholar, he bid them go forth and remember the dignity, and honor, and labor, to which they are connected with your calling, &c. By way of encouraging the scholars, he referred them to Euclid- the father of the mathematicians; Augustine, Origen, and Cyprian, among theologians; Hanno, Hannibal, Toussant L'Overture, among warriors; Franklin and Baker, among the school of philosophy; Lawrence and Hyman, in the world of commerce, &c. He having clearly shown the first part of his subject in all of its ramifications, he now comes to the scholar's field, when he brought in the mind – the human mind. Having finished this part of the subject, he entered upon the third portion of his subject, which was, The Scholar's Reward, which was by no means the least. He now addressed himself particularly to the members of the Alumni, after which the audience was dismissed to meet again at 8 o'clock, P.M. The Alumni met; and long before the time every seat was occupied. When we arrived, more than half of them had spoken; those whom we heard were worthy of listening to after they were through. There were five who graduated and received their diploma. We were not near enough to hear the address to them.

On May 16, 1863, The Christian Recorder offered a brief account of the graduation ceremonies for the Institute for Colored Youth. Though they missed the public examinations, the article recounts speeches from Institute Alumni, as well as the keynote speaker, the renowned Henry Highland Garnet. 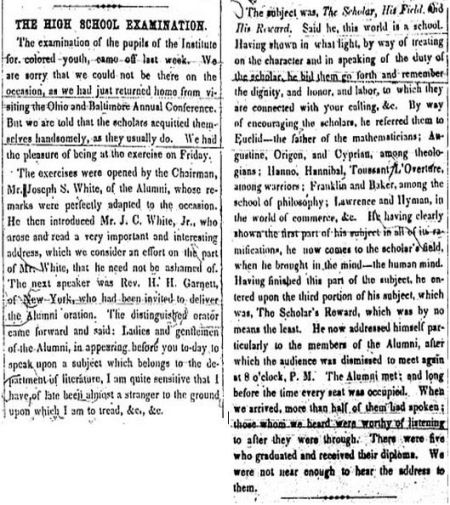