FALVEY MEMORIAL LIBRARY
Home Search Guides Help
You are exploring:  Library  >
Exhibits Home  >
A Great Thing for our People: The Institute for Colored Youth in the Civil War Era  >
Documents  >
Account of 1861 Graduation

The Examination of the Pupils of the Philadelphia Institute for Colored Youth.
The Christian Recorder, May 11, 1861

The Examination of the students of this Institution came off on the 3d of May, at 9 o’clock, A.M. The Institute was crowded with the parents and friends of the students, who came to witness the progress their children and young friends had made in their various studies. The Class in Geometry was examined by Prof. Bassett, the Principal of the Institute. This class evinced a very fair knowledge of that science, and did much credit, to themselves and their tutor. The Class in Physical Geography was examined by Miss Grace A. Mapp. This is a science with which all ought to be familiar, as it imparts a knowledge of the earth’s surface, and the motions of the atmosphere by which it is surrounded. We were pleased with the prompt answers of the class, which gave strong evidence that no pains had been spared by their teacher to render them proficient in this branch of study. The Class in Physiology was examined by Mrs. S.M. Douglass. Physiology ought to be taught in all our schools, as it instructs us in the use of the functions or organs of the human frame. Mrs. Douglass is well versed in Anatomy, Physiology, and Hygiene, and her class has improved well under her instruction, exhibiting a pretty thorough acquaintance with these sciences. The Class in Arithmetic was examined by Mr. O.V. Catto, son of Rev. M. Catto, who is now a Presbyterian minister. The class gave evidence that they understood the rudiments of Arithmetic. We were highly pleased with this class. The Class in United States History was examined by Miss Martha A. Farbeaux. We were so far back in the hall that we could not hear how perfect this class was, as they spoke very low; though if they have made but little proficiency in their studies, we do not believe that there was any lack of duty on her part, as we know her to be very zealous. The Class in Mental Arithmetic was examined by Mr. J.C. White. This class has far surpassed our expectations; those little minds are becoming very well drilled in mental science, under the able tuition of Prof. White. The Class in Latin, which read and translated into English portions of Virgilii Aeneis, pleased us very much by their elegant style of reading and translation. Prof. Bassett deserves great credit for the manner in which he examined the senior class. On the whole, it was a very creditable examination, in all the branches.

The following prizes were then awarded: – Miss Estellena Johnson received the highest prize for classics, among the girls, $15; Mr. Henry Boyer obtained the highest prize for excellence in the Dead Languages, $15; Mr. Jos. S. White received the highest prize for excellence in Mathematics, $15; Miss Elizabeth B. Kenneday and John Q. Allen each received, for diligence and good conduct, $10; James F. Needham, J.H. Rodgers, Mary V. Brown, and Elizabeth Handy each received $5, for regularity of attendance and general good scholarship. Five of the scholars graduated, and received their diplomas, viz.: Miss Estellena Johnson, and Messrs. H. Boyer, J.S. White, M. White, and A.L. Jones. The young gentlemen have studied in the Institute about four years and a half, and the young lady some seven years. The diplomas were delivered by Mr. Charles Yarnall, who is one of the Board of Managers. His address to the graduates was marked by great ability, and held the audience spell-bound for about twenty minutes; his advice to the graduates will, we hope, be remembered by them. These five graduates are now prepared to act as teachers. We hope that the Board of Trustees of the Sixth Street Colored School will, after vacation, give us colored teachers, to teach our children. It is no excuse for them to say, that they cannot get competent colored teachers. The public schools throughout this State, we believe, have colored teachers, and we cannot see any just cause why we should not have them here. We hope the city authorities will see to it, and give us colored teachers in Sixth Street School. Of course, we do not wish to see any teacher chosen who is not competent, but only such as are morally and mentally so.

On May 3, 1861, the Institute for Colored Youth held its annual examination and graduation ceremonies. The Christian Recorder covered the event in their May 11 edition, and described the large crowd that gathered at the school to witness the ceremonies. The article praises the academic achievements of both the students and teachers. It also lists the year’s five graduates, as well as the recipients of the annual prizes. 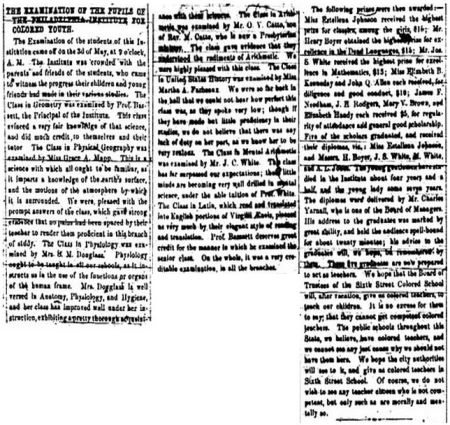