1. Describe the three forms of government which existed in the English colonies in America.

What feature was common to all of them?

2. The Declaration of Independence.

(a) When, where, and by what body was it signed?

(b) Its contents (important features)?

3. State one point of difference between the Articles of Confederation and the Constitution of the United States in respect to the following: -

(a) The legislative department

(b) The executive department

4. State the qualification required by the Constitution for the office of President.

5. Explain the three methods by which laws are made.

6. How are the judges of the United State courts appointed?

How long do they hold their office?

How may they be removed from office?

7. In case some citizens of Pennsylvania should rebel against the authority of the state, how could the assistance of the United States government be secured?

8. Explain how slavery was abolished in the United States.

This is an original examination booklet from a Philadelphia Public High School. The civics section of the exam consisted of eight essay questions which were primarily focused on the structure of the United States government. 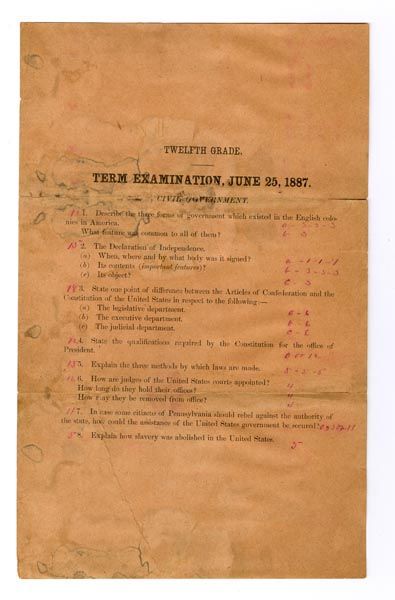