FALVEY MEMORIAL LIBRARY
Home Search Guides Help
You are exploring:  Library  >
Exhibits Home  >
A Great Thing for our People: The Institute for Colored Youth in the Civil War Era  >
Graduates  >
Sarah A. Stevens

Sarah Stevens graduated in October 1860 at age 20. By 1862, the Institute Managers reported that Sarah was "engaged at present in a Small Dry Goods Store with her sister." Stevens served on the executive council of the Institute for Colored Youth’s Association of Alumni. Octavius Catto was president and Estellena Johnson was Vice President.  Stevens married Henry Billingsley, a tailor and a porter, on March 26, 1863. By 1871 the couple had moved to Maryland, where she was teaching. Billingsley died in 1882, leaving Sarah a widow. She eventually found her way back to Philadelphia. Sarah Stevens Billingsley died September 1927 and was buried at Eden Cemetery. 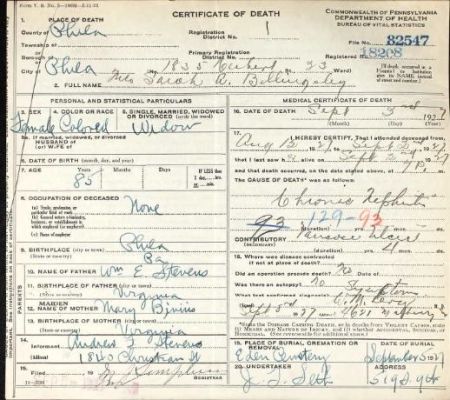