Mary Elizabeth Ayres was one of four graduates from the Institute for Colored Youth in 1858 and, along with Martha A. Farbeaux (Class 1858), was one of the first female graduates. Like many of her peers, Ayres would use her education to teach African-American children.

Ayres was born on July 18, 1842 to Robert B. Ayres, a tailor, and unknown mother. Ayres entered the Institute for Colored Youth in 1854 where her character as a student was described as “generally good.” On May 4, 1858, Ayres graduated from the Institute. The historical record goes quiet until 1860 when the Institute’s Board of Managers reported that Ayres was “teaching in New Jersey – has just but begun.” Ayres taught in New Jersey from 1860 to 1862 until an unknown illness brought her home to Philadelphia. Ayres succumbed to her illness on May 22, 1863 at age 20. Ayres was buried four days later on May 26, 1863.

Following her death, the Alumni Association of the Institute for Colored Youth passed a resolution memorializing Ayres. Published in the May 30, 1863 edition of The Christian Recorder, the memorial states,

Whereas, it has pleased our Heavenly Father, in his all-wise dispensation, to remove from our midst in the morning of her life, MARY E AYERS, one of our members, be it therefore. Resolved, that in her death, our association has lost one of its most cherished members, her friends an esteemed associate, and that in the community, as well as in our organization, is a void which cannot readily be filled. Resolved, that we condole with her bereaved mother in her sore affliction, and point her to that source from which come all true comfort and consolation; and to that strong arm which is ever extended to support and protect the widow. Resolved, that a copy of these resolutions be sent to her bereaved mother, and that they be published.

In addition, at the Institute’s graduation ceremony in May 1864, Caroline LeCount (Class of 1863) read an obituary for Ayres written by Martha Farbeaux. 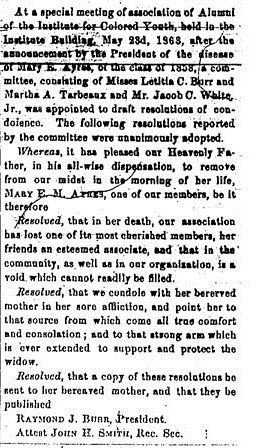