FALVEY MEMORIAL LIBRARY
Home Search Guides Help
You are exploring:  Library  >
Exhibits Home  >
A Great Thing for our People: The Institute for Colored Youth in the Civil War Era  >
Graduates  >
Martha A. Farbeaux

Martha A. Farbeaux was born in South Carolina to Jacob Farbeaux, a painter from New York, and Catherine Perot, a homemaker from South Carolina. Born in 1838, it is unknown why or when Farbeaux moved to Philadelphia. In any case, Farbeaux began at the Institute for Colored Youth in 1853 where her character as a student was listed as “good always.” On May 4, 1858, Farbeaux was one of four to graduate and, along with Mary E. Ayres, was the first female graduate of the Institute. Following graduation, Farbeaux stayed on at the Institute by accepting a teaching position in the Girls School. The 1860 Board of Manager’s report noted Farbeaux’s position as “Assistant Teacher of the Female Department” and indicated that she was “teaching with good success.” The Christian Recorder described Farbeaux’s teaching style as “very zealous.” In 1861, Farbeaux was elected as a member of the executive council of the Alumni Association of the Institute for Colored Youth. Farbeaux was also active in contraband relief efforts and donated clothing destined for a contraband camp in Alexandria, VA.

In 1863, Farbeaux married William H. Minton, a classmate at the Institute who did not graduate. Minton was a prosperous caterer, an active member of the Banneker Institute, an accomplished flute musician, and a friend of Octavius Catto. In fact, W.E.B. Du Bois described Minton as running, “a restaurant at Fourth and Chestnut, and became, as the others did, moderately wealthy.” Shortly after being married, Farbeaux gave birth to two children, Mary F. Minton (b. 1864) and William Minton (b. 1866). Farbeaux resigned her teaching position at the Institute on October 4, 1864 and would not teach again until after William Minton’s death. In 1885, Farbeaux was listed as teaching kindergarten in a place called a “bee hive” school. She later moved on to teach at a Quaker school at Locust St. and Rasberry Alley in Philadelphia. By 1902, Farbeaux was back at the Institute for Colored Youth as a “drawing” instructor. Fanny Jackson Coppin, Principal of the Institute, noted that Farbeaux, “was an excellent teacher and endeared herself to all who came under her. She is still living, and the solitary link between the original school and today.” It is unknown when or if she retired, but Farbeaux died on July 3, 1921 at age 83. She was buried at Eden Cemetery. 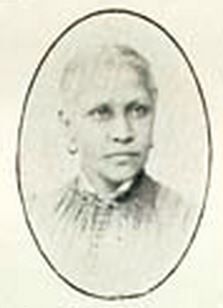