Joseph Hazzard Rodgers was the youngest child of Isaac Rodgers, an ice cream maker from Virginia, and Maria Rodgers, a homemaker from South Carolina. It seems likely that Rodgers’ parents were born into slavery and made their way to Philadelphia either by purchasing their freedom or running away. Born in 1845, Rodgers was eight years younger than his sister Edith Rodgers (b. 1837) and ten years younger than his other sister Martha Rodgers (b. 1835). Rodgers lived in the Pine Ward of Philadelphia and entered the Institute for Colored Youth in 1859. In May 1863, Rodgers was one of five graduates of the Institute and received an 8.40/10 on the final examination. Following graduation, Rodgers became active in the Frederick Douglass Lyceum which was an African-American literary and debate society. In 1864, Rodgers served as a board member in the role of “critic.” While we know that he worked as a clerk in Philadelphia, little else is known about his professional or personal life. Rodgers died on January 23, 1918 at age 73 and was buried in Eden Cemetery.

"Joseph H. Rodgers," Death certificates, 1906–1944, Series 11.90 (1,905 cartons), Records of the Pennsylvania Department of Health, Record Group 11, Pennsylvania Historical and Museum Commission, Harrisburg, Pennsylvania, Ancestry.com; 1850 Federal Census, Philadelphia Pine Ward, Philadelphia, Pennsylvania, Roll: M432_813, Page: 320B, Image: 113, Ancestry.com; Objects of the Institute for Colored Youth, with a list of the officers and students, and the annual report of the Board of Managers, for the year 1859, Philadelphia, 1859; "Institute for Colored Youth," The Christian Recorder, May 16, 1863; "Notice," The Christian Recorder, June 18, 1864. 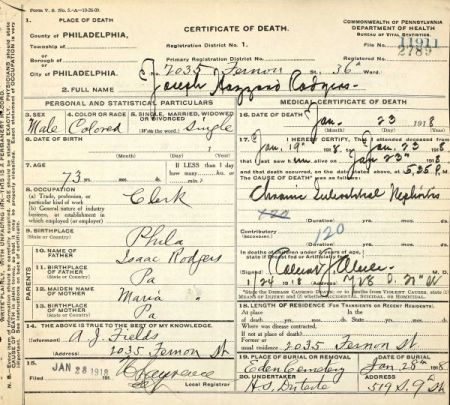 Source: Records of the Pennsylvania Department of Health