James L. Smallwood was born in Mulberry Ward, Philadelphia, to father Joseph Smallwood, a barber, and mother, Lydia, a homemaker. He had three brothers and two sisters. One brother became a private secretary to supreme court Chief Justice, Salmon P. Chase. One of Smallwood's sisters was educated in a Catholic school and later became a Nun. Smallwood graduated from the class of 1864. Prior to graduation, he was awarded a $10 prize “For diligence and correct deportment”. He is described in the 1871 Institute’s Annual Report as a “schoolteacher in Pennsylvania”. James L. Smallwood is listed in the 1880 federal census as a schoolteacher with a birth date of 1845, living in a York, Pennsylvania household with his mother, Lydia, sister, Mary A. Gray, and brother-in-law, Hamilton W. Gray. Smallwood became a Deputy Grandmaster Mason For the counties of York, Dauphin, Cumberland, Franklin and Lancaster, indicating community prominence.

In 1867, Smallwood became a teacher. By 1871, he had officially opened the first school for African American children in York, PA. An 1883 York City Directory states that he was a barber in addition to a schoolteacher. He died in 1885 and is buried in Lebanon Cemetery, York, PA. Smallwood's obituary in the Nov. 4, 1885 York Evening Dispatch stated that in the York community, Smallwood was "the well-known teacher of the colored school". Smallwood was also "an active [member of the Zion African Methodist Episcopal] Church and Sunday school." Smallwood's obituary concluded that he would "be greatly missed in the field of labor as well as in his school." There is a marker (displayed at left) memorializing the 1892 elementary school named in his honor on West Pershing Street in York. Many York children were educated in the Smallwood school building from from 1892 until the mid-1960s. The school weathered many racial conflicts and was eventually repurposed when York, PA schools became desegregated during the 1960s. 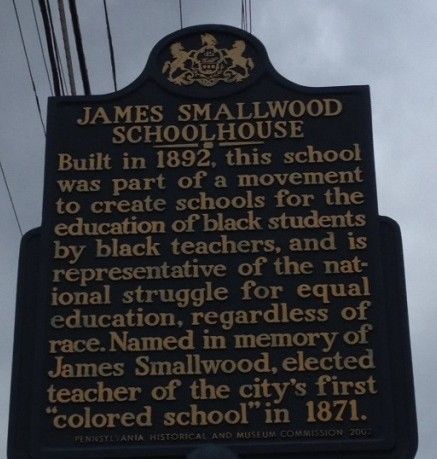