Harriet Johnson graduated in 1864 and served as principal of the infant department at the Philadelphia Association of Friends for the Instruction of Poor Children. Johnson became principal of the preparatory and ladies’ departments of Avery College, Allegheny, Pennsylvania, in April 1868.  Avery College, named after a benefactor who also supported Oberlin, Lincoln, and Wilberforce Universities, was founded in 1849.  Henry Highland Garnett served as president of Avery when Johnson taught there.  Harriet married Frederick J. Loudin, a famous singer, in 1870.  The 1871 ICY Annual Report identified Harriet as married and living in Pittsburgh.  In 1900, the couple was living in Portage, Ohio.  Frederick died in 1904, and Harriet Cassell Loudin died November 11, 1907.  (In the census Harriet Loudin was mistakenly identified as white.) 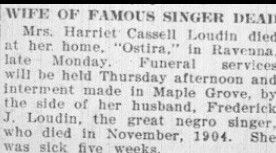