FALVEY MEMORIAL LIBRARY
Home Search Guides Help
You are exploring:  Library  >
Exhibits Home  >
A Great Thing for our People: The Institute for Colored Youth in the Civil War Era  >
Moments  >
Teachers for the Community

Graduates of the Institute for Colored Youth:
Teachers in the African American Community

These five graduates are now prepared to act as teachers. We hope that the Board of Trustees of the Sixth Street Colored School will, after vacation, give us colored teachers, to teach our children. It is no excuse for them to say, that they cannot get competent colored teachers.

This was the conclusion drawn by a reporter for The Christian Recorder after witnessing the annual examinations and graduation for the students of the Institute for Colored Youth on May 3, 1861. Indeed, he was not alone in this opinion. Most of the Institute’s graduates in the Civil War era went on to become education activists and teachers in black communities, not only in Philadelphia, but in cities throughout the North and in freedmen schools in the postwar South.

When the Quaker elder Richard Humphreys left the original endowment for what was to become the Institute for Colored Youth, he tasked his friends with forming a

benevolent society or institution…having for its object the benevolent design of instructing the descendants of the African race in school learning, in the various branches of the mechanic arts and trade, and in agriculture, in order to prepare and fit and qualify them to act as teachers in such of those branches of useful business as in the judgment of the said society they may appear best qualified for.

Humphreys left the specifics of the institution up to his friends, but he made clear his desire to create a cohort of skilled African American teachers. So upon opening the Institute for Colored Youth, while the Board of Managers did not require graduates to become teachers, their policy was that such students “shall always have the preference over others who have no such intent.”

Humphreys’ vision was reflected in the careers and accomplishments of the Institute’s graduates. By 1865, twenty of the first thirty-seven graduates were teaching. Of the remaining graduates, a number taught for a few years before turning to other pursuits. 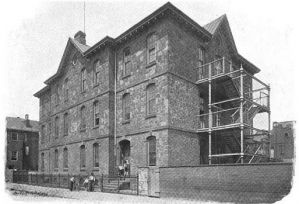 Most were teaching in Philadelphia, including Jacob C. White, Jr., Octavius V. Catto, Martha A. Farbeaux,John Quincy Allen, and James Fields Needham, who all taught for a time at the Institute. Others broke down other barriers to equal education. After graduating in 1862, John Quincy Allen beat out thirty white candidates for a teaching position in the city’s Banneker Colored School, becoming the first African American public school teacher in Philadelphia. 1860 graduate Cordelia Jennings opened a private school in her home, which eventually won public school status as the Ohio Street School.

Two graduates, Jacob C. White, Jr. and Caroline LeCount, became influential principals in Philadelphia. In 1864, White left his teaching post at the Institute to become Principal of the Roberts Vaux Consolidated School, a position he held for 32 years. Upon his arrival, there was a marked improvement in the once-struggling school; by 1876 they moved to a larger building. As Principal, White was held in high esteem, and in 1870 he became the first African American member of the Teacher’s Institute of Philadelphia. From this position, White helped shape the city’s growing public school system. He challenged school segregation when he could, and succeeded in landing positions for some of his students in white public schools. White also opened the doors of the Vaux school to those barred from other institutions. So great was his influence in the Philadelphia area that White became instrumental in placing other African American men and women in teaching positions. By 1875, three-fourths of the African American teachers in Philadelphia and Camden, New Jersey were graduates of the Institute for Colored Youth, a fact due in no small part to letters of recommendation written by Jacob White.

Caroline LeCount, who graduated in 1863, also became a leading educator in the city. LeCount 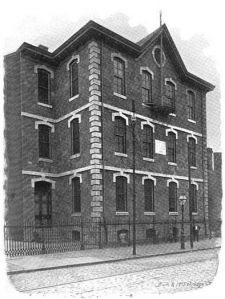 began teaching at Cordelia Jennings’s Ohio Street School in 1865, starting a career at the school that lasted nearly fifty years. After Jennings left the school in 1867 to teach in Kentucky, LeCount replaced her as Principal. Like White, as Principal, LeCount was an influential figure in the Philadelphia school system. She helped African American men and women get teaching positions, and was a strong proponent of hiring black teachers to teach black children. LeCount strongly defended the merits of African American teachers. Against claims to the contrary, LeCount defended black teachers’ superiority, as measured by the higher standards they were held to compared to white counterparts. Her defense prompted a commentator to describe LeCount as “a match for all of the officers and members of the Board of Education combined.”

Institute graduates also found success teaching in other Northern cities. After breaking the color barrier in Philadelphia, John Quincy Allen moved to New York City, where he served as principal of several of the city’s public schools. James L. Smallwood opened the first school for African American children in York, Pennsylvania. After graduating in 1864, at the age of nineteen James M. Baxter began a forty-five year career at the Colored School in Newark, New Jersey. First as a teacher and later as Principal, Baxter turned the struggling school into a thriving one and helped open white high schools to his graduates.

During and after the Civil War, Institute graduates also traveled south to open schools for freed 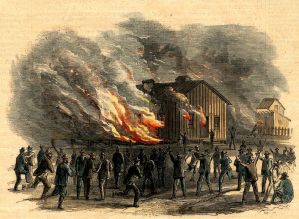 men and women. Two early pioneers were Sallie Daffin and John Wesley Cromwell. Daffin started teaching in Norfolk, Virginia, and also taught for a time in Tennessee. Cromwell returned to his hometown of Portsmouth, Virginia, where his family had been enslaved, to open a school. Beyond
Portsmouth, Cromwell taught at several schools in Virginia and Maryland. Teaching freedpeople in the postwar South was often dangerous, and both Daffin and Cromwell were victims of violent Klan attacks and watched as their schools, the product of their hard work, were burned to the ground.

On May 10, 1864, in the midst of the Civil War, Institute graduate and teacher Octavius Catto delivered his Commencement Address at the school’s annual graduation. Titled “Our Alma Mater,” Catto’s speech stressed the importance, now more than ever, of ensuring that African Americans, especially slaves, were prepared for equality:

It is for the purpose of promoting, as far as possible, the preparation of the colored man for the assumption of these new relations with intelligence and with the knowledge which promises success, that the Institute feels called upon at this time to act with more energy and on a broader scale than has heretofore been required. It is just here that its claims are worthiest of consideration. It is the duty of every man, to the extent of his interest and means, to provide for the immediate improvement of the four or five millions of ignorant and previously dependent laborers who will be thrown upon society in the reorganization of the Union.

With the outcome of the Civil War and the fate of millions of slaves still uncertain, 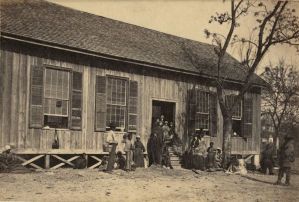 Catto nonetheless entreated Institute graduates to begin the work of preparing for equality.
Institute graduates answered Catto’s call and followed in the footsteps of Daffin and Cromwell. Cordelia Jennings, for example, left her position at the Ohio Street School to teach at a school in Kentucky. In all, between 1861 and 1876 at least sixty-five Institute students went south to teach in African American schools.

In public and private schools, in Northern cities and Southern states, the Institute’s elite graduates went on to become distinguished teachers. They passed along the lessons and high expectations of the Institute to generations of African Americans. Their legacy as teachers continues to be felt today.