During the Civil War, female relief workers from the United States Sanitary Commission (USSC), United States Christian Commission (USCC), and other private organizations made widespread exemplary efforts to supply soldiers with food and medical supplies and to provide the troops with nursing and religious services. However, members of these relief organizations did not always serve the United States Colored Troops; when they did, they often provided these services with the condescension associated with the white middle class.  In her Hospital Sketches, for instance, abolitionist Louisa May Alcott referred to freedpeople she met in Baltimore as "so unlike the respectable members of society I'd known in moral Boston." 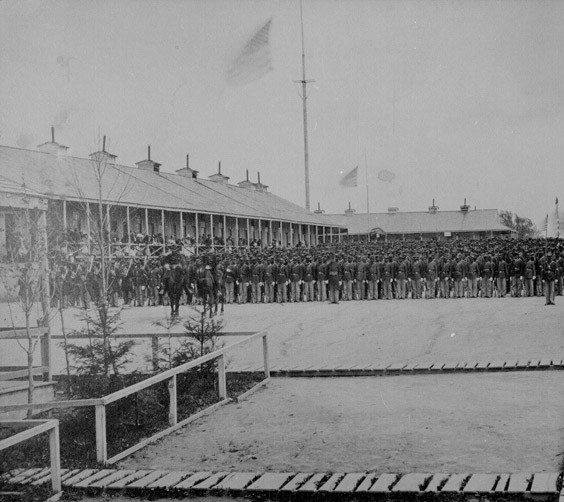 When the Union Army opened the door for the enlistment of United States Colored Troops (USCTs) in May 1863, the African American community knew that it was not just soldiers who had to mobilize for war. The soldiers in the field and in hospitals would need supplies, medical care, and support for their families at home. In addition, relief, in the form of supplies and assistance was urgently needed for freedmen who were beginning to depart slave territory on the trail of the Union Army. While their fathers, brothers, sons, and husbands went off to fight, it was African American women who responded in great numbers to lead relief efforts.

Among those who answered the call for volunteers was Sarah L. “Sallie” Daffin, an 1860 graduate of the Institute for Colored Youth. As president of the Norfolk Ladies’ Soldiers’ Aid Association, she directly administered assistance to troops and worked as a nurse in Virginia and North Carolina in addition to maintaining an active teaching career.

When Camp William Penn, a training facility for USCTs, opened outside Philadelphia in June 1863, there was an immediate need for supplies and volunteers. Within a month a group of African American women organized one of the most well-known of the Philadelphia-based relief associations, the Ladies’ Union Association (LUA). The Association was formed on July 20, 1864, “for the Purpose of Administering Exclusively to the Wants of the Sick and Wounded Colored Soldiers.” The LUA was self-sustaining and had no affiliation with white organizations. In its First Annual Report, the Association remarked that it consisted of “but fourteen members, nearly all of whom are young and inexperienced.” Indeed, many members of the LUA were recent Institute graduates. Caroline “Carrie” R. LeCount (class of 1863) became the organization’s Corresponding Secretary. Mary V. Brown (class of 1864), M. Gertrude Offit (class of 1864), and Cordelia A. Jennings (class of 1860) are all listed as LUA committee members in the Association’s Reports and articles in The Christian Recorder newspaper. 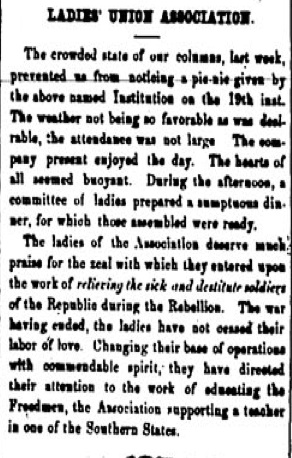 The primary goal of relief agencies like the LUA was to hold fairs in order to raise funds for charitable purposes. Racism presented significant obstacles to the LUA charitable work, though, like when in 1864 the LUA committee was denied access to a hall. Ultimately, the fair met with success. By selling goods such as “china, meat, tin, and perfumery,” the relief organization provided assistance for sick soldiers they hoped to support, donating $50.00 to the “sick at camp Wm. Penn” and presenting “$200.00 to Penn Relief.”

Institute graduates Caroline “Carrie” LeCount, Mary V. Brown, and M. Gertrude Offit spearheaded Ladies’ Union Association relief efforts late in the war, by serving on a committee to arrange the LUA’s 1865 Fair which was to occur on April 17, 1865. However, the fair was postponed due to a “great National calamity,” the death of President Abraham Lincoln. The Association held a “special meeting” on April 15, during which a committee was formed to issue a statement of formal condolence for the President’s death.

The LUA’s “Report”, written in 1867, demonstrates that their work did not end with the conclusion of the Civil War. The organization shifted their relief purposes exclusively to the assistance of freedpeople in the South. A June 20, 1866 column in The Christian Recorder eloquently summarized their new purpose: “the war having ended, the ladies have not ceased their labor of love. Changing their base of operations with commendable spirit, they have directed their attention to the work of educating the Freedmen, the Association supporting a teacher in one of the Southern states.” The LUA’s 1867 “Report” notes that the LUA paid “the passage home for a freedwoman” at a cost of $3.00 in addition to donating many clothing and food items to the formerly enslaved. In 1866, the LUA voted to decide which General-- Ulysses S. Grant, William T. Sherman, or Benjamin F. Butler would receive the organization’s donation of expensive “vestments” for the freedpeople, acquired with funds raised at the LUA’s most recent Fair. Significantly, the correspondence demonstrates that by 1866 the LUA had grown to include 450 women. General Butler was selected due to his advocacy for the United States Colored Troops. LeCount thanked him, and in turn the LUA received a note of praise from Butler:

Ladies of the Union Association, Philadelphia:

MESDAMES:- For your beautiful presents, forwarded to me through your Corresponding Secretary, Carrie R. Le Count, which have given me the liveliest satisfaction, please accept my thanks.

Rich and intrinsically valuable as they are, they have a higher and nobler value to me, and shall be laid up with other treasures, endeared by sacred memories, as a legacy to my children,- the earnest of grateful appreciation of what I wished, rather than what I was enabled to do in behalf of those on whom organized sin and wrong had submitted every outrage through generations. These gifts, made more precious by the vote of preference with awarded them, are at once the exemplar and evidence that the race of colored men have the high virtue of gratitude, and the intelligence, in the mass, to appreciate the efforts made to raise their condition to equality of right.

Their soldiers, on many fields, under my eye, have shown high courage, endurance, and enthusiastic patriotism. Who shall say that such men, so willingly perilling their lives to save the country, are not fit to take part in choosing their own rulers and in enacting their own laws, in the country which they have helped to resuce from its rebellious foes?

Permit me again to express my thanks for your favor, and believe me, 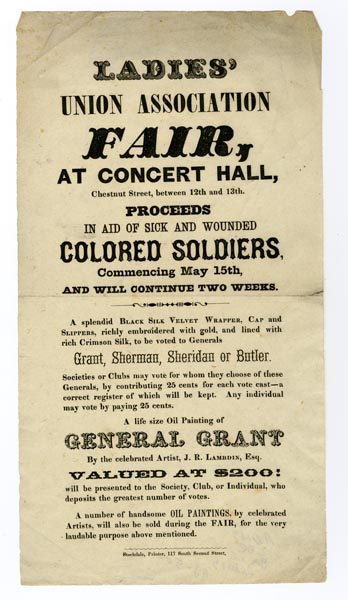 ICY’s graduates used their affiliations with relief organizations to assist political causes and advance black educational initiatives in Philadelphia and the South. In addition to years of service to the causes of education and community advocacy, Caroline “Carrie” LeCount was assisted by fellow relief workers in her attempts to board streetcars in order to gain equality and enforce a new streetcar desegregation law, which was put into effect in March of 1867. Sarah “Sallie” L. Daffin (class of 1860) taught freedpeople’s children in the South. Her school received numerous donations from relief agencies. Cordelia A. Jennings and M. Gertrude Offit also instructed at freedmen’s schools both South and North, which were aided by relief organizations.

ICY alumnae and teachers stood at the center of wartime relief work. Women who learned together in ICY classrooms went on to collaborate in efforts to provide assistance to freedpeople starting new lives after the slavery, to teach them in southern schools, and to find one another after years of separation.  These women collected much-needed supplies for the USCT while at the same time they continued the political education they learned at the ICY, working as community leaders, advocates, teachers, and nurses.