FALVEY MEMORIAL LIBRARY
Home Search Guides Help
You are exploring:  Library  >
Exhibits Home  >
A Great Thing for our People: The Institute for Colored Youth in the Civil War Era  >
Moments  >
Institute and the Civil War

Students in Arms: The Institute for Colored Youth and the Civil War

The men and women of the Institute community worked for equality for African Americans in a number of ways. In the classroom, in meeting halls, and on the streets, Institute students and graduates sought  to expand the legal and social rights of  African Americans in Philadelphia and across the United States. When the Civil War broke out in 1861, military service offered men of color an opportunity to demand equality. 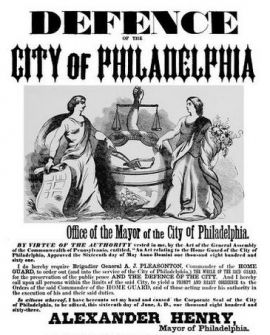 When Robert E. Lee’s Army of Northern Virginia invaded Pennsylvania in June 1863, African American men of Philadelphia felt a duty to respond and sought to demonstrate their loyalty to the nation. A group of city leaders, including Institute faculty members Ebenezer Bassett, Octavius Catto, and Jacob C. White, Jr., worked together to encourage black enlistment for the city’s defenses. In advertisements in city newspapers, these leaders announced that they had formed a committee to promote African American enlistments and organize troops to defend Philadelphia. Faculty reminded Philadelphians of color that Lee’s army sought to enslave Northern blacks and, indeed, had already begun to do so.  After warning of the dangers to black homes and families, the Committee urged African Americans to enlist. They appealed to readers’ sense of duty to the United States and emphasized the opportunity to prove their manhood and to demonstrate that they were worthy of the rights of citizens. “For our own sake, and for the sake of our common country, we are called upon now to come forward,” a June 30, 1863 advertisement in the Philadelphia Inquirer entreated black readers, “(l)et us seize this great opportunity of vindicating our manhood and patriotism through all time.”  Institute teachers understood that black enlistment served the practical purposes of providing much-needed security against an invading enemy as well as offering black men the political benefits associated with demonstrations of manhood and loyalty.

Men from the Institute for Colored Youth did not just encourage others to take up arms to defend their city and state – they also answered the call. Institute teachers Octavius Catto and Jacob C. White, Jr. helped organize a company of volunteers to defend the capital at Harrisburg, the known target of the Army of Northern Virginia. Among Catto’s company of ninety men were several Institute students, including Lumberd L. Nicken, William T. Jones, Martin M. and Joseph White, Joseph B. Adger, Andrew Glasgow, Henry Boyer, Jr., Joseph G. Anderson, Jr., and Jacob R. Ballard.

On June 16, before his teacher and students marched off to war, Institute Principal Ebenezer Bassett met with Philadelphia Mayor Alexander Henry to ensure that these volunteers would receive fair treatment. In a follow-up letter, Bassett sought written assurances that the volunteering Institute teachers and students would be used only for “the mere repelling of the invaders,” that they would receive the $10 promised to volunteer defenders as well as proper arms and equipment, and that their families would be cared for in the event of injury or death. Mayor Henry responded promptly, declaring that the volunteers would “not be detained longer in service than the present emergency.” He added that the city would provide supplies and the $10 from its bounty fund, but arms would come from Harrisburg. Finally, while he could make no promises about pensions in the case of death or injury, the mayor expected that the men would “receive the same consideration as other troops.” Bassett must have been satisfied, for the next morning Catto’s company joined other volunteers in trains bound for Camp Curtin near Harrisburg. Emilie Davis, a young African American Institute student, commented on the departure of some of her friends in her diary, noting that, “(t)o day has bin the most exciting i ever witness we went to see the boyes start for Harrisburg.”

But despite their enthusiasm to serve their state and assurances from Mayor Henry, the military campaign of Catto’s company was short. Orders regarding the state’s defenses did not flow seamlessly between Governor Andrew Curtin and Major General Darius Couch, commander of the Department of the Susquehanna and tasked with the defense of Pennsylvania. As a result, while Curtin was willing to allow any volunteer to serve the state during the invasion, Couch refused to accept Catto and his company, citing federal law about African American enlistment. The men returned to Philadelphia just as quickly as they had left. “When i came home this morning the first thing I heard was that the boyes had bin sent back,” Emilie Davis noted in her diary, adding with some uncertainty, “i feel glad and sorry.” Happy that her friends were safe, perhaps Davis also appreciated that the men had lost the opportunity to serve their state and their nation. Some of the men from the company later enlisted into the Union Army; Catto was not among them. 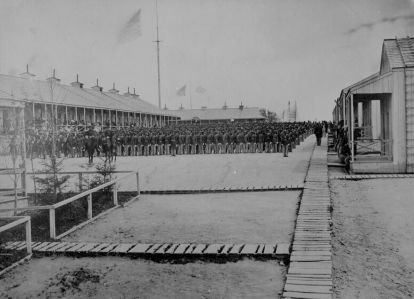 Despite this setback, Catto and others affiliated with the Institute continued to encourage black enlistment. On June 26, 1863, about a week after Catto and his men had been turned away, Camp William Penn opened eight miles outside of the city, a facility designed for the training of black volunteers. The opening of Camp William Penn marked Pennsylvania’s acceptance of black enlistments. Though too late to be of help in the immediate emergency of the Confederate invasion, by the end of the war the camp had trained nearly eleven thousand black volunteers.

Following the Union victory at Gettysburg on July 3, 1863, the African-American community of Philadelphia redoubled their efforts to encourage enlistments. On July 6, 1863, in conjunction with the recent opening of Camp William Penn, African-American leaders held a mass meeting at National Hall for the “promotion of colored enlistments.” The North American estimated attendance at five thousand attendees, “about equally divided” between black and white. Bassett, Catto, and White once again stood in front of the crowd. But this time they were accompanied in their work by other prominent speakers. The headliner was Frederick Douglass, the most popular black figure of the day and a leading spokesman for ideals espoused by the Institute faculty, namely that African-American men could seize the rights of citizenship by demonstrating their manhood in service to the Union Army.

Professor Bassett read an address titled, “Men of Color, to Arms! Now or Never!” In this address, Bassett claimed that the present conflict was the perfect opportunity for black men to rise from their inferior position in society by claiming the equal rights of citizenship while  serving their country. If “the Englishman, the Irishman, the Frenchmen, the German, [and] the American” could claim citizenship by “an appeal to the sword,” Bassett wondered, why should African Americans be any different? He declared this to be a new era for African Americans, but he warned that they had to seize the opportunity:

We must now awake, arise, or be forever fallen. If we value liberty; if we wish to be free in this land; if we love our country; if we love our families, our children, our homes – we must strike now while the country calls; we must rise up in the dignity of our manhood, and show by our own right arms that we are worthy to be freemen.

Equality, Bassett insisted, was something black men had to seize by force of arms. They had to prove they were worthy, and the war provided an opportunity to do so.  The country was calling on them to fight.

Douglass spoke last, describing the Civil War as the best chance “since the world began” for an oppressed race to rise up and claim their rights as men. He predicted that no power on earth could look at the black Union soldier and “deny that he has earned the right of citizenship in the United States.” Douglass made reference to General Couch’s refusal to accept the service of Octavius Catto and his men during Lee’s invasion and urged blacks not to be dismayed by this incident. Though they may have been slighted by the state, service to the nation was still an open source of opportunity. “[T]he broad gates of the United States stand open night and day,” Douglass entreated, and “Citizenship in the United States will, in the end, secure your citizenship in the State.” “Young men of Philadelphia, you are without excuse,” Douglass famously concluded the day’s events, adding “[t]he hour has arrived, and your place is in the Union army.” 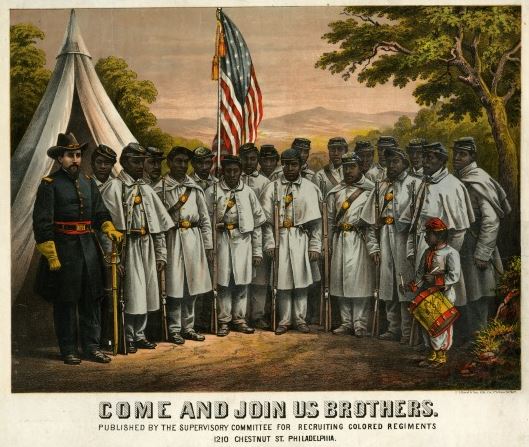 Although we cannot know who was in the audience, it seems likely that students, alumni, and families of the Institute community were among the attendees. Those who could not attend,  read the text of the speeches published in newspapers. Looking at the Institute graduates who actively supported the Union Army provides further evidence that the speakers’ calls to action did not fall on deaf ears.  At least two graduates, Samuel Gould (Sergeant, 45th USCT) and Martin M. White (24th USCT), enlisted in the Union Army.

The Institute for Colored Youth stood at the center of a black community that welcomed the war as an end to slavery and as an opportunity to achieve equal citizenship. Military service offered male students and graduates an opportunity to serve their country and show that they were worthy of the rights of citizenship. Charting a course to citizenship that took black men like Catto, Gould, and White to southern battlefields was of course dangerous, particularly for black men whom Confederates refused to recognize as combatants. Unlike their white counterparts, these Union soldiers, when captured by the enemy, faced execution or enslavement. And, for most of the war, the United States Army paid USCT soldiers less than their white counterparts, denied them adequate supplies and medical care, and refused to grant their families pensions. And, only one – Pittsburgh native Martin Delaney – received an officer's commission. USCT units were lead by white officers of various competencies. Had Frederick Douglass been granted a commission, he would have served alongside his soldier-sons; likely, the educated and ambitious men of the Institute for Colored Youth would have been eager to follow him.