FALVEY MEMORIAL LIBRARY
Home Search Guides Help
You are exploring:  Library  >
Exhibits Home  >
A Great Thing for our People: The Institute for Colored Youth in the Civil War Era  >
Moments  >
The Centennial Celebration of 1876

The Centennial Celebration of 1876

“[To] be intelligent is to understand the laws of the land, and the great feature of our laws is that they make no distinction by reason of color, and are therefore in direct conflict with this movement of Mrs. Smith’s. To produce so grand a result, which the truly intelligent can comprehend, has cost our nation thousands of lives and millions of money, and we laugh to scorn this attempt to repudiate the sacrifices and sufferings of true Americans.” –Caroline LeCount, 1873

In spring 1873, Mary Rose Smith and Elizabeth Duane Gillespie were busy preparing for the 100th anniversary of American independence. As members of the Women’s Centennial Executive Committee, Smith and Gillespie were tasked with coordinating women’s efforts in fundraising for the numerous festivities that would mark this grand occasion. Founded on February 24, 1873, the Women’s Centennial Executive Committee was formally recognized by the United States government on May 7, 1873. Women’s work in planning for the Centennial, though, was circumscribed by male officials. Women were restricted to fundraising, gathering petition signatures, creating a Women’s Pavilion at the Centennial Exhibition, and choosing the music for Centennial ceremonies. Despite these limitations, Smith and Gillespie dutifully went about planning how to best attain donations for the Centennial Exhibition scheduled to take place in Philadelphia’s Fairmount Park.

The Colored Women’s Centennial Committee took to the newspapers to condemn  Smith’s racism. In an interview with the New National Era, Institute for Colored Youth graduate Caroline LeCount (Class of 1863) recounted the details of the meeting with the white women, recalling how, “the ladies listened, quietly, astonished, as Mrs. Smith proceeded to tell them who and what they were, and to inform them of their duties to be performed.” Particularly disturbing was Smith’s use of the word “remand,” which had a long and painful history for African Americans. The women were so astounded by Smith’s actions, LeCount explained, that they rejected her offer of assisting in the work of the Women’s Centennial Executive Committee. When the New National Era reporter asked if  the Colored Women’s Centennial Committee would continue, LeCount stated emphatically, “I think not, sir. In fact I feel certain that we will take no part in the commission whatever.” Another Institute for Colored Youth graduate, Rebecca Cole (Class of 1863), joined LeCount in the newspaper protest against Smith and the Women’s Centennial Executive Committee. 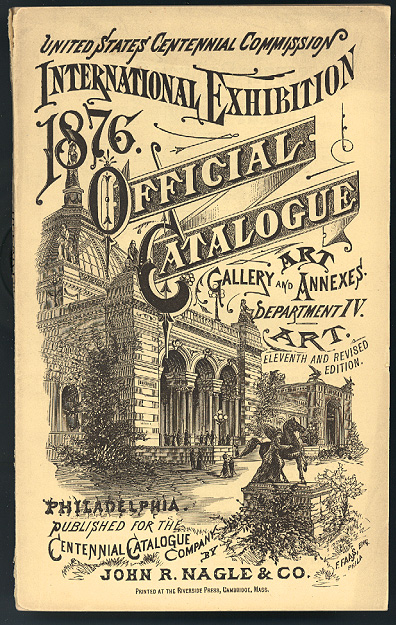 The Centennial Exhibition of 1876 was a resounding success with over ten million people visiting in a six month span. The Exhibition allowed the United States to show off its industrial might and identify itself with other world powers. Of particular interest, a three-story Corliss steam engine and the main exhibit hall at Fairmount Park became symbols of American success. However, the Centennial Exhibition was also notable for its lack of inclusion of African Americans. Although Cole and LeCount publicly fought against color prejudice, Centennial officials would only include African Americans in stereotypical and subservient roles, in exhibits highlighting ascendent social darwinism and as waiters in the dining rooms. Caroline LeCount and Rebecca Cole learned the lessons of the Institute for Colored Youth, well, not walking away from a civil rights fight, was one of them.

1. Official Catalogue of the 1876 International Exposition
(University of Delaware)