The Assassination of Octavius V. Catto 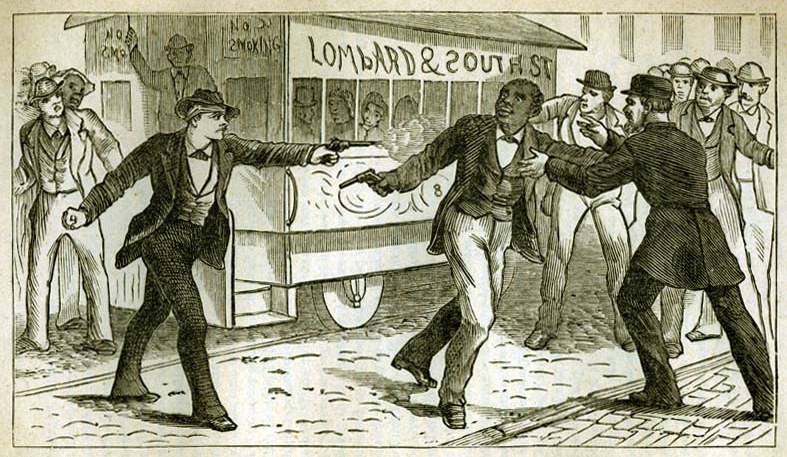 “a cold-blooded assassination of a peaceful, inoffensive man.” –Samuel Wanamaker, 1871

On the morning of October 10, 1871, election day, Octavius V. Catto, an 1858 graduate of the Institute for Colored Youth, left his home at 814 South Street and walked to his polling place in Philadelphia’s Fourth Ward. After casting his vote, Catto strolled to the Institute where he was an instructor. As Catto taught, a few blocks away a massive Election Day riot grew in all directions. The riot was initiated by Democratic ward leaders who sought to suppress the African American vote which was expected to go strongly Republican. When African Americans rebuffed intimidation tactics, Irish gang members lead by William “Bull” McMullen as well as uniformed police officers turned to violence. According to one account, “soon the riot was five blocks in one direction, three in the other. The storm kept spreading. A fight on a corner became a brawl along a block. Victims were targeted and chased. A distinct sound of the city was heard throughout the riot area: the popping of pistol balls striking brick.” Unable to determine whether the police were attempting to quell the mob or instigate it, African Americans had nowhere to turn for protection. When African Americans tried to fight back, the white mob became more frenzied. Some African Americans were wantonly singled out as was the case of Isaac Chase, who was murdered after his home was burglarized. The morning’s racial violence spread chaos throughout the city and left three African American men dead.

At lunch Catto learned about the extent of the terror of the morning, Catto decided to send his

students home to assure their safety. Soon after, Catto received word that his Pennsylvania National Guard unit, the 5th Brigade, would be activated at 6 PM in order to stop the violence. Catto, who was a Major, was ordered to gather supplies for the ensuing battle against the rioters. Catto stopped at a local pawn shop to purchase a pistol, a mandatory part of his National Guard uniform. Before heading home, Catto stopped by Mayor Fox’s office where the mayor assured Catto that the violence would cease. Satisfied with the mayor’s answer, Catto began the short walk to his home on South Street. Just a block from his home, Catto was confronted by a group of white rioters. Here the details become unclear.  The Philadelphia Inquirer reported that Catto and the rioters exchanged words and then an altercation broke out. The paper remarked that “While here he [Catto] was accosted by a couple of white men, who made use of several improper remarks to him. Mr. Catto and the fellows then got into an altercation. It is alleged that in the heat of the argument he drew a revolver and fired one shot from it.” However, another eyewitness insisted  that Catto did not draw his weapon. In a more likely scenario, Catto and the rioters exchanged words and went on their way. As the rioters passed, one of them, Frank Kelly, turned around and fired four shots at Catto. All four shots struck Catto in the back. With wounds to his right arm, left shoulder, left thigh, and a bullet lodged in his right ventricle, Catto died shortly after 3:30 PM.

Catto was survived by his finance Institute graduate Caroline LeCount (Class of 1863) and his father, Reverend William Catto. As news spread of Catto’s death, celebrations of the Republican Party election-day victory was muted by sorrow. The city’s black community was shocked by the loss of young Octavius Catto, a prominent intellectual and political and social leader. Jacob C. White, Jr. (Class of 1857), Catto’s friend since their days as students at the Institute, organized a number of memorials, one large one was held at National Hall and was well attended by local politicians and prominent African Americans. Condolences came from leaders across the country, including from Henry Highland Garnet who eulogized Catto at his church in New York.

Catto was buried on October 16, 1871, in what was one of the largest funerals in Philadelphia history. Because  Catto was killed while on duty as a member of the Pennsylvania National Guard, Catto’s viewing was held at the City Armory where thousands walked past his body.  Catto was buried at Lebanon Cemetery,  owned and operated by the family of Catto’s friend Jacob C. White, Jr.

Catto’s assassin Frank Kelly eluded authorities for over six years by moving from town to town. In 1877, Philadelphia Police were alerted that Kelly may have been living in Chicago under the alias of Charles Young. Chicago Police located Kelly and detained him for extradition to Philadelphia. Kelly’s trial for the murder of Catto began on April 23, 1877. With competing eyewitness testimony, such as that from Samuel Wanamaker, and an all white jury sympathetic to Kelly, the jury returned a not guilty verdict. 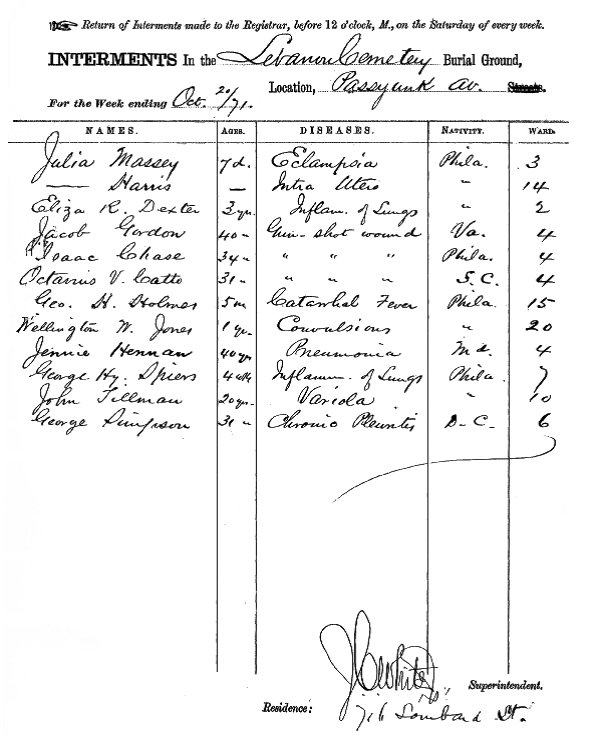 In recent years, there has been a resurgence of interest in the life of Catto, and as a result, a historical marker commemorates the sight of Catto’s murder on the 800 block of South Street. The City of Philadelphia has begun preliminary fundraising for the erection of an Octavius Catto Monument to be placed near Philadelphia’s City Hall.

In all, the assassination of Octavius Catto is a striking reminder of how dangerous it was in the 1860s-1870s to teach young black women and men to stand up for themselves and to fight for their rights--and how essential the Institute for Colored Youth was in teaching these important lessons.

1. The Assassination of Octavius V. Catto
(Historical Society of Pennsylvania)