Sweeny's invasion plan involved a three-pronged attack of Canada in the Missouri frontier, Cornwall and Montreal region, and Goderich and Sarnia through the Great Lakes.  He assured the membership they could carry out the plan with 10,000 men and $450,000 and thought little about the possibility that they might not attain those goals.

Weeks after Sweeny mobilized all of his forces the Fenians still lacked the manpower necessary for such an attack.  Fenian forces even lacked strong leadership.  John O’Neill, an officer just arrived from the south, was the one to act on Sweeny’s change of orders late on May 31st by entering Canada through the Niagara River near Black Rock with less than 1000 men. 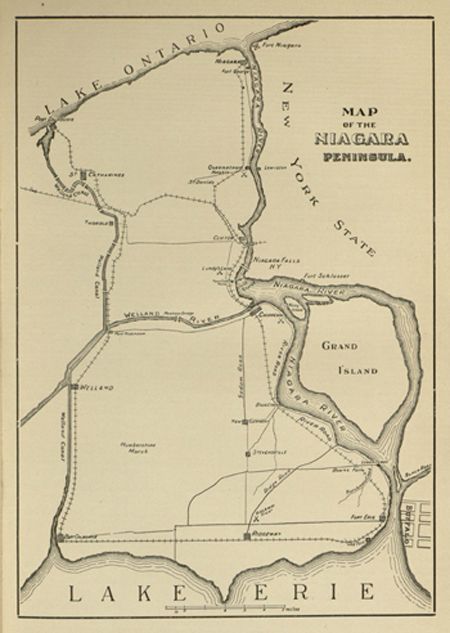 Map of the Niagara Peninsula

The Fenians’ first confrontation with the Canadian volunteer troops happened at the Battle of Ridgeway.  Miscommunication and delays among the Canadian officials resulted in the Fenians facing a force much smaller than their own and so they fought the Canadians into a retreat.  Though only 27 years old during this disturbance, Canadian soldier George Taylor Denison went on to publish a memoir of his time working within the Canadian militia, Soldiering in Canada: Recollections and Experiences.  Denison remembers many of these missteps among Canadian officials during the 1866 raids.  On June 1st, the commander of the Imperial forces of the Upper Canada district, Major-General Napier, ordered for young Denison to report to him.

I went up at once, and General Napier said he had heard that I knew the country on the Niagara frontier pretty well.  I told him that I did know it around the Falls and up the river above Chippewa, as I had, for some years, spent my summer holidays in that neighbourhood.  He asked me a great many questions, and apparently had very little information as to the locality, and had no map, except a large general map of the Province of Upper Canada, which hung upon the wall of the office. 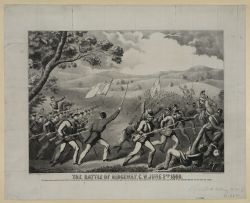 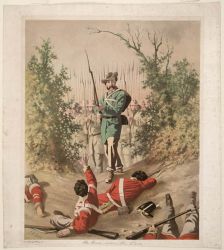 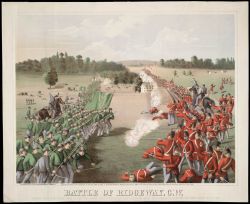 Refreshed with success over the assembling Canadians, the Fenians advanced to Fort Erie to set up a base for operations. There, Colonel Dennis of the Canadian army was arresting stray Fenians and strangers alike with an even smaller group of men.  Underestimating the size of O’Neill’s unit, Dennis led his men into a second confrontation at the Battle of Fort Erie that lasted less time and resulted in another Canadian retreat.

O’Neill’s men encamped after two victories but soon understood their total isolation from any supplies or support.  Under orders of the United States Government, the USS Michigan had intercepted all Fenian arms and soldiers after O’Neill’s group crossed the Niagara.  With the Canadian militia finally organizing a united front to oppose the Fenians and no hopes of food or ammunition O’Neill chose to abandon the invasion of Canada and retreat to the border.  The Harrison, an American tug on the Niagara, met the men during their crossing and placed them under arrest.  Many believed this fate to be better than waiting for the Canadian militia to surround the men on foreign soil.  A letter from the front to a Fenian Senator’s wife reads:

I am told their still over 100 men in the woods hereabout, they are frequenting the river – This expedition has quickly terminated – you know my sentiments so I need not make any further remarks.  These men that are now in the River as prisoners had a very narrow escape. 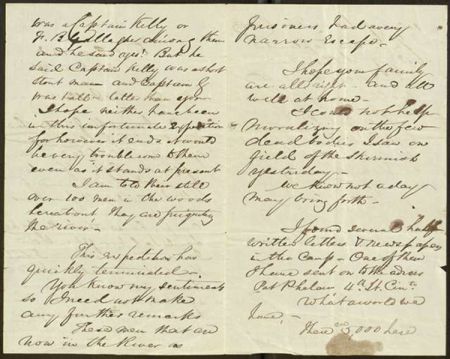 General Sweeny, having traveled from his original base of operations father west after the change of strategy, arrived on the Eastern Front one day after O’Neill and his soldiers retreated.  Unfortunately for the Fenians, General George Meade had once again appeared bearing a new Neutrality Proclamation from U.S. President Johnson.  Meade’s men confiscated arms and arrested all but one major officer of the Fenian army.

Continuing with the Fenian mission, the only officer to avoid arrest, Samuel Spear, entered Canada with less than 1000 very poorly armed men.  At their first meeting with the Canadian militia, later named the Battle of Pigeon Hill, the Fenians ran for the border where waiting United States and Canadian authorities arrested them on both sides, thus ending any more attempts at invasion.

Trying to avoid blame for any part of the string of events the media had dubbed the “Fenian Fizzle,” Roberts issued a statement on June 12 reproaching only the United States Government for interference.  He even demanded his soldiers deny the U.S' offers of free transportation home from the front in exchange for concord.  Many soldiers valued their expedient departure from the Canadian border above Roberts’ request, but he tried to shame them into abstaining:

I desire that you accept of no offers of transportation from officials who deprived you of the very food, in some cases, which was necessary to supply your pressing wants, and who couple their offers of a free passage with conditions which to accept would cast a stain upon your patriotism as Irishmen and as free citizens, who are bound to sympathize with every struggling nationality. 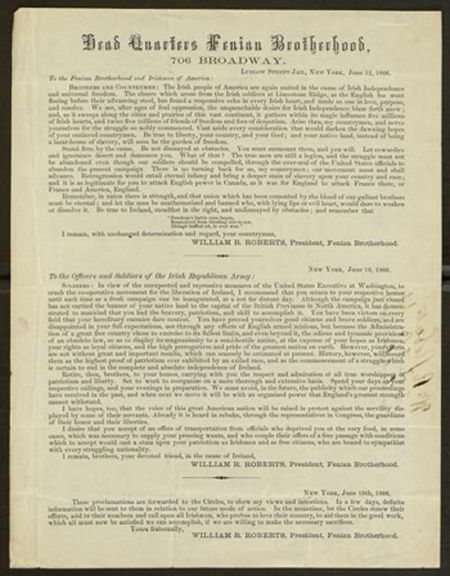 The Fenian coffers were empty, army was disgraced, and men were imprisoned in two countries.  The next meeting of Fenian officials saw blame forced upon almost every leader involved.  The Fenian Convention at Troy stripped General Sweeny of his position, left Roberts in his place with little support, and left the Brotherhood without leadership that they trusted to bring about progress for the Irish cause.

Sweeny mobilizes all Fenians under his command

Col. O’Neill and 1000 men cross the Niagara near Black Rock

O’Neill’s men retreat and are arrested

Sweeny and all major officers except for Spear are arrested