Thomas Augustine Daly attended Villanova from 1880-1887, entering in the preparatory school (now Malvern Preparatory School) at age nine. He earned a Commercial Diploma in 1886, and in 1887 was still in attendance, delivering an oration in German at the commencement day exercises and winning a gold medal for it. “All my friends say I spoke like a native, but they didn’t say of what” (Scrapbook, p.16).

-- Historical sketch of the Augustinian monastery, college and mission of St. Thomas of Villanova : Delaware County, Pa. during the first half century of their existence, 1842-1892 / compiled by Rev. Thomas C. Middleton. Daly's name appears on page 67 in Appendix IV, Roll of Students. Browsing the list of names, "Augustine" appears as a popular middle name choice for Catholic boys of the time period.

-- Scrapbook, kept by Thomas A. Daly, 1891-1922 [p.16]. The amusing "Autobiography of Thomas A. Daly" appears in a publication or program of the Poets and Humorists of the American Press, preserved in his scrapbook. It details his early life, time at Villanova and Fordham, his early career, marriage, and the birth of his first five children through 1905. The final entry: "-- --, 19-- - I died to-day from overwork." 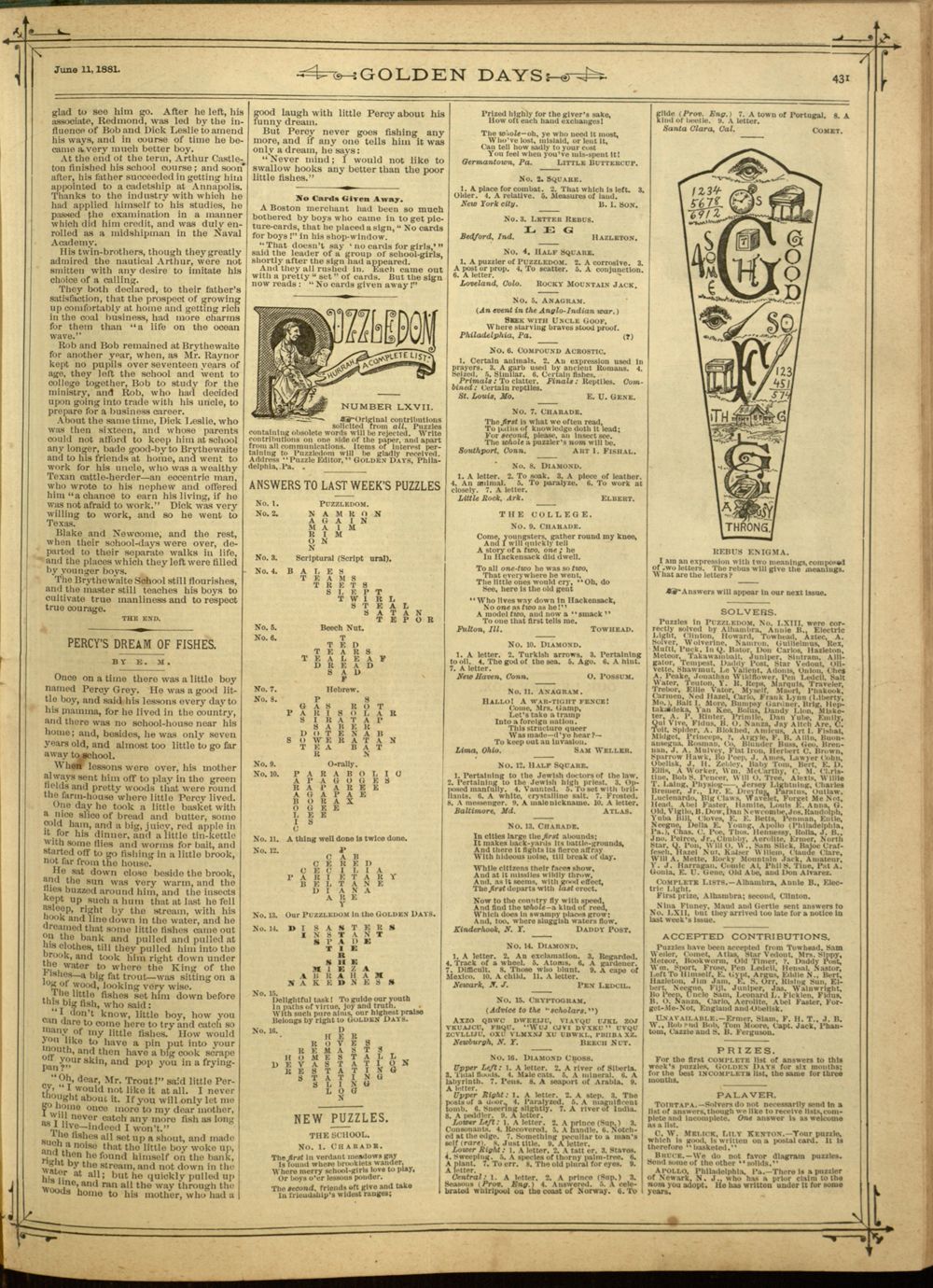 While a student at Villanova, Daly roomed with Frank Donnelly (the future Rev. Francis P. Donnelly, S.J. of Fordham University faculty) and the two boys were avid readers of the popular periodical Golden Days for Boys and Girls. Both contributed their own charades, anagrams, and forms to the puzzle pages of the paper. In 1887 Daly left Villanova College and entered Fordham University where he would stay only two years.

September 16, 1889 - The governor [Daly's father] has been too sick to think about sending me back to college, so I hustled around to-day and got a job as a night-clerk in the publication office of the Philadelphia Record. (Scrapbook, p.16).

Image Right: A typical puzzle page from the June 11, 1881 issue of Golden Days for Boys and Girls. This Philadelphia story paper featured stories for younger children. Published by James Elverson, it is the companion to his adult story paper "Saturday Night". 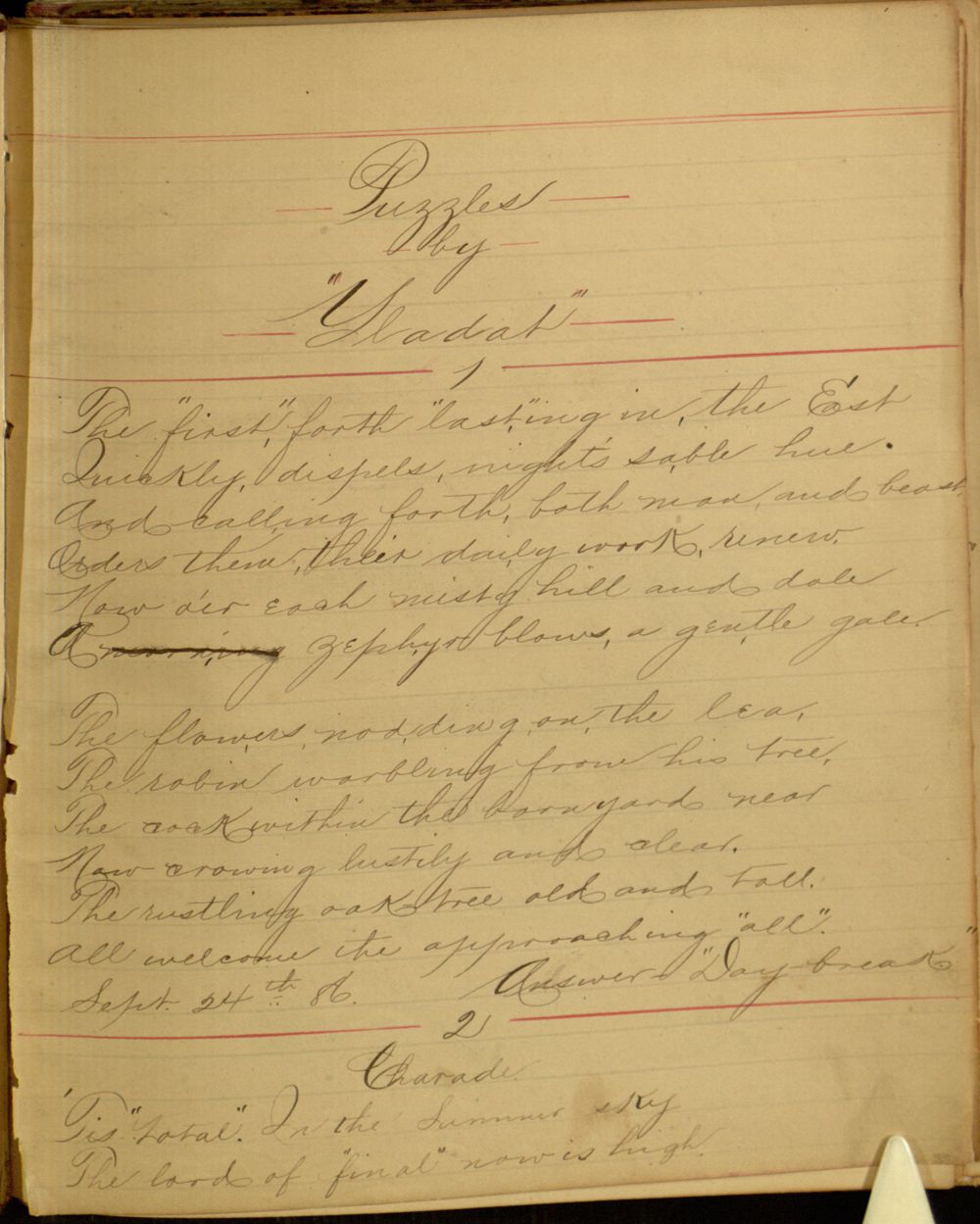 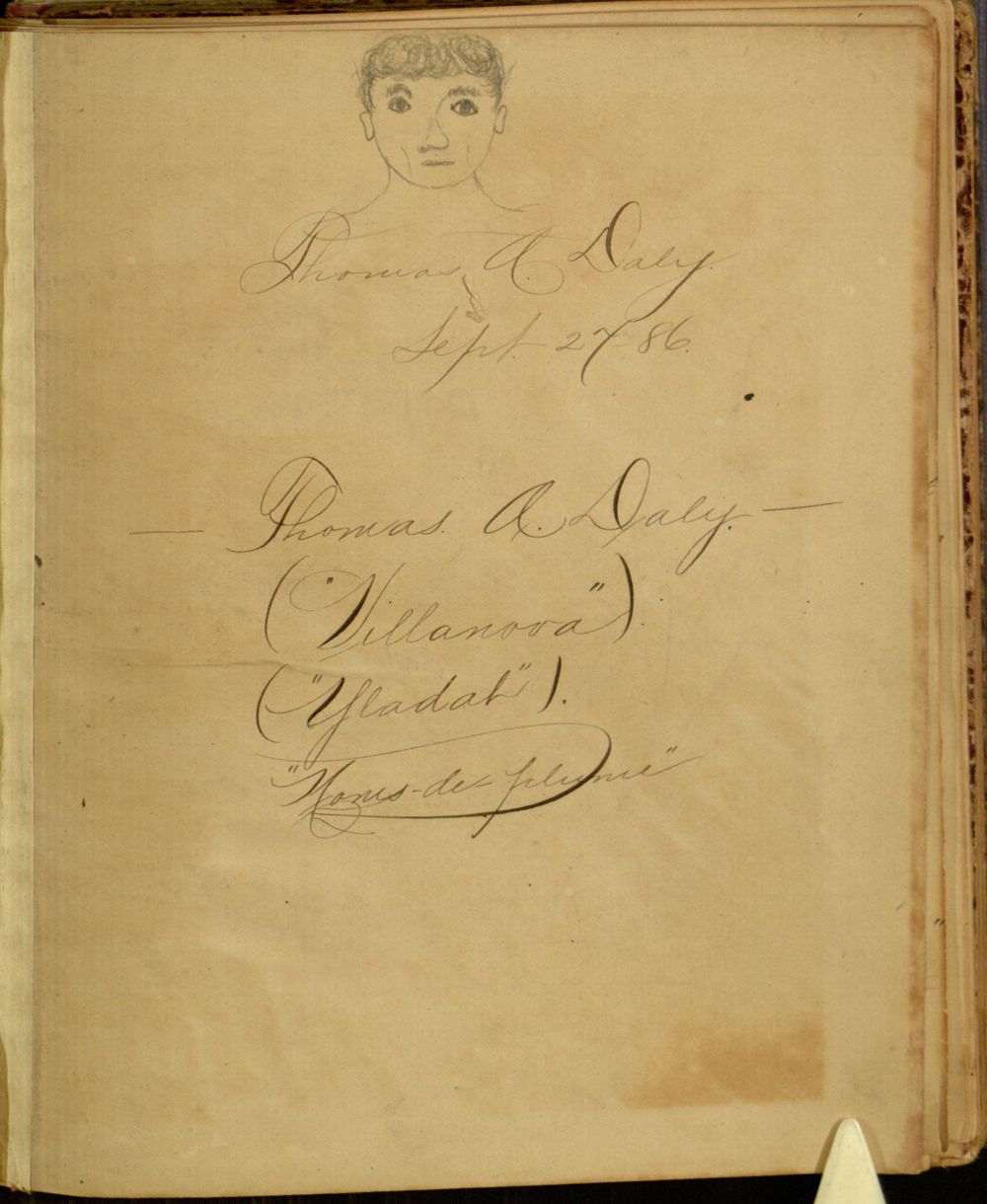 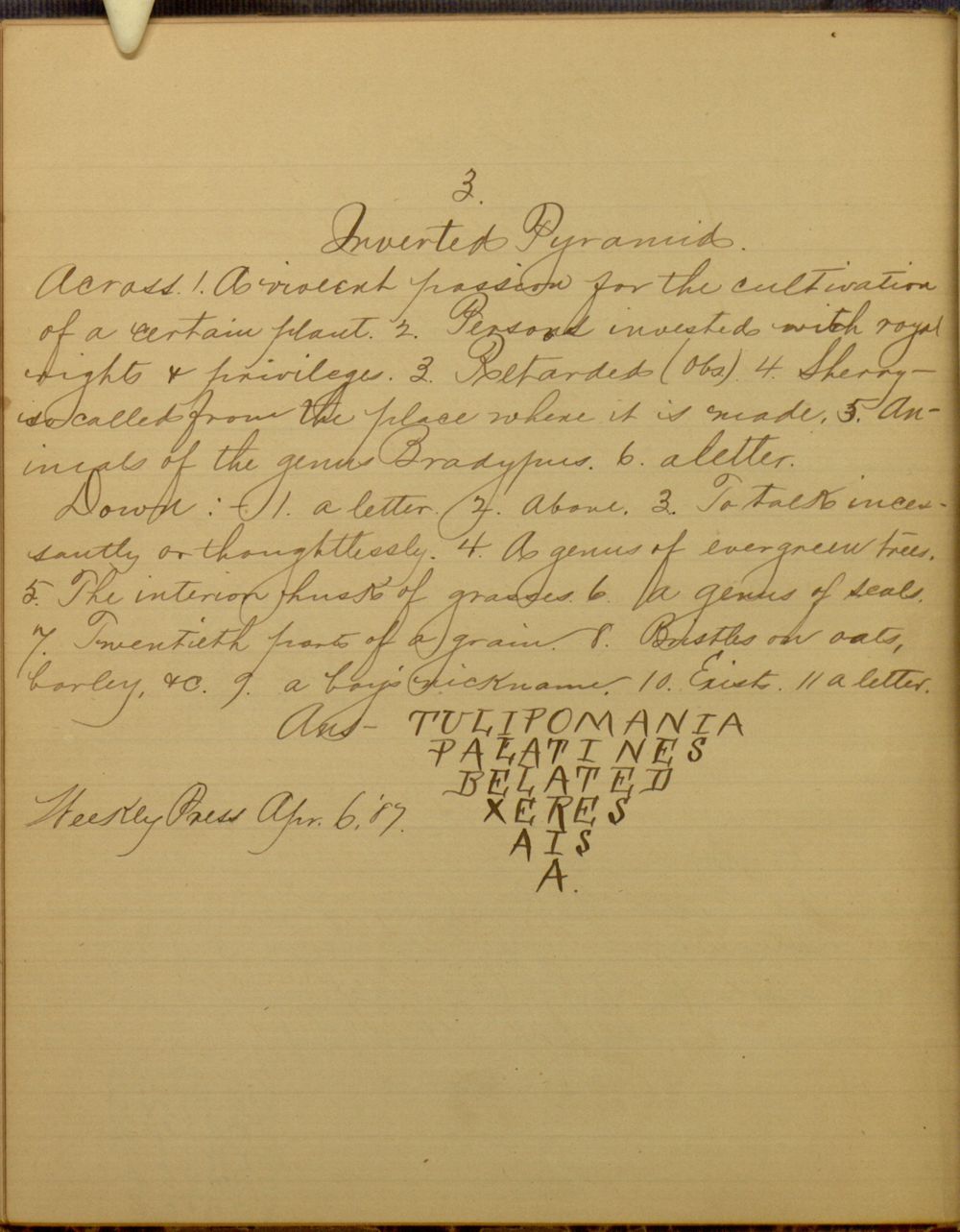 From the "Auto-biography of Thomas A. Daly" appearing in his Scrapbook (p.16):

November 20, 1881 - I wrote a clever piece of poetry last night for a puzzle-paper. It's a charade and the answer is "ink-stand." Here it is:

CHARADE.
In the schoolroom it is nice, though outside it's very drear.
Full of "first" my "total" "lasts" on the desk before me here.
There 'twill "last" till I get tired of seeing it there,
Then I will throw it no one knows where.

It isn't so hard to be a poet when you know how.

Hint: A "charade" is the definition of something in verse, usually rhymed. To solve the puzzle, the reader must guess the "first" and "last" words which also make up the "total," which is the answer to the "charade." 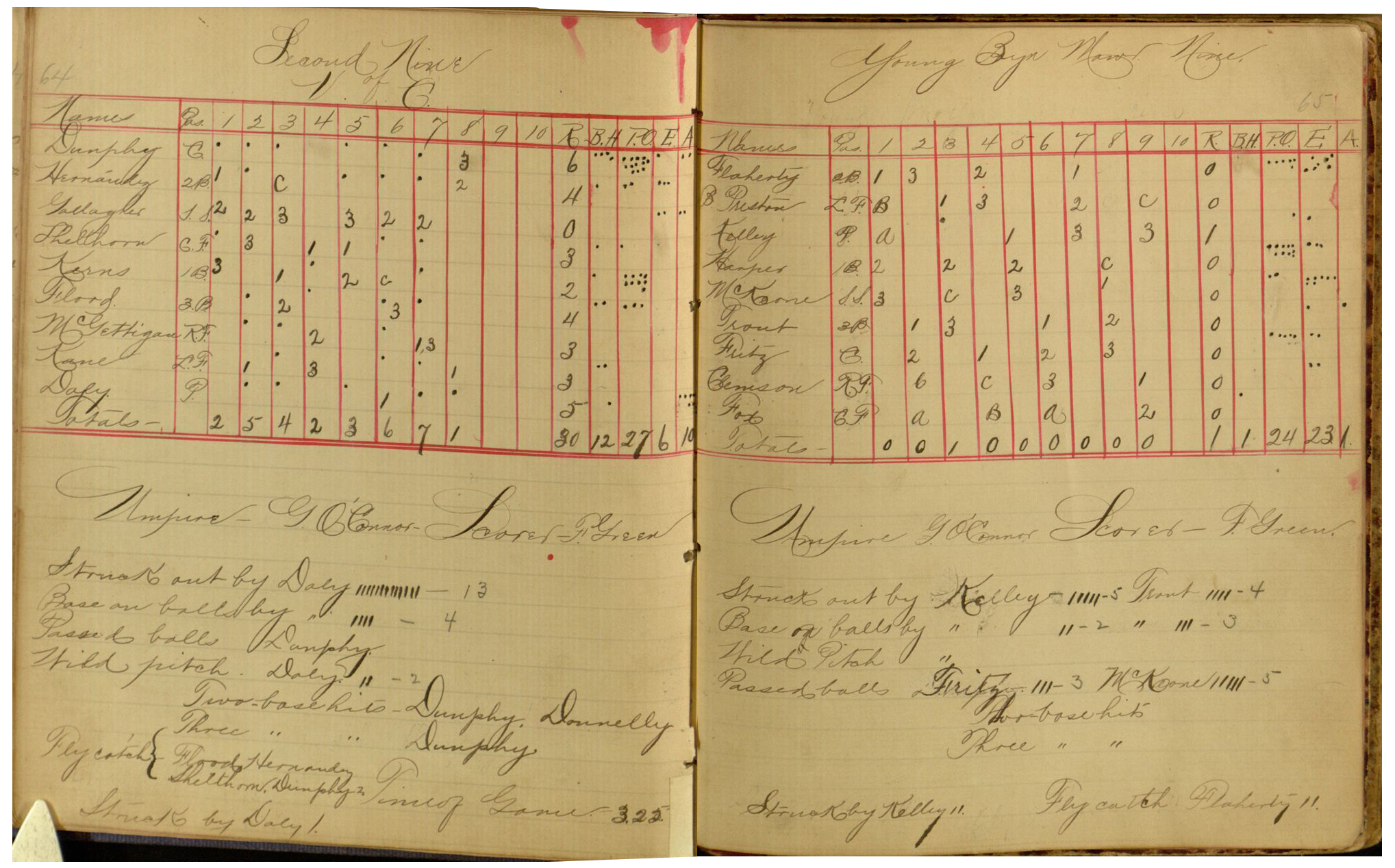 -- Thomas A. Daly's Villanova Notebook v. 1, 1886-1887, pp. 64-64. Four notebooks kept by Thomas A. Daly while a student at Villanova College from 1880-1887 were presented to Villanova College Library by the author in 1946. This volume contains essays, marks by subject, and baseball game stats and scores. Daly played shortstop, first base, and pitcher for the "Second Nine" of Villanova College. This page records a game against the "Young Bryn Mawr Nine" with Daly as pitcher, throwing 13 strike-outs and 2 wild pitches.

Villanova's Distinctive Collections also holds correspondence in the University Archives from Father Daniel P. Falvey, O.S.A. to T. A. Daly from 1946-1947. In the letters, Father Falvey invites Daly to campus to speak at a "Friends of the Library" meeting on April 28, 1946. Daly wrote about the event in his column in the Evening Bulletin two days later: 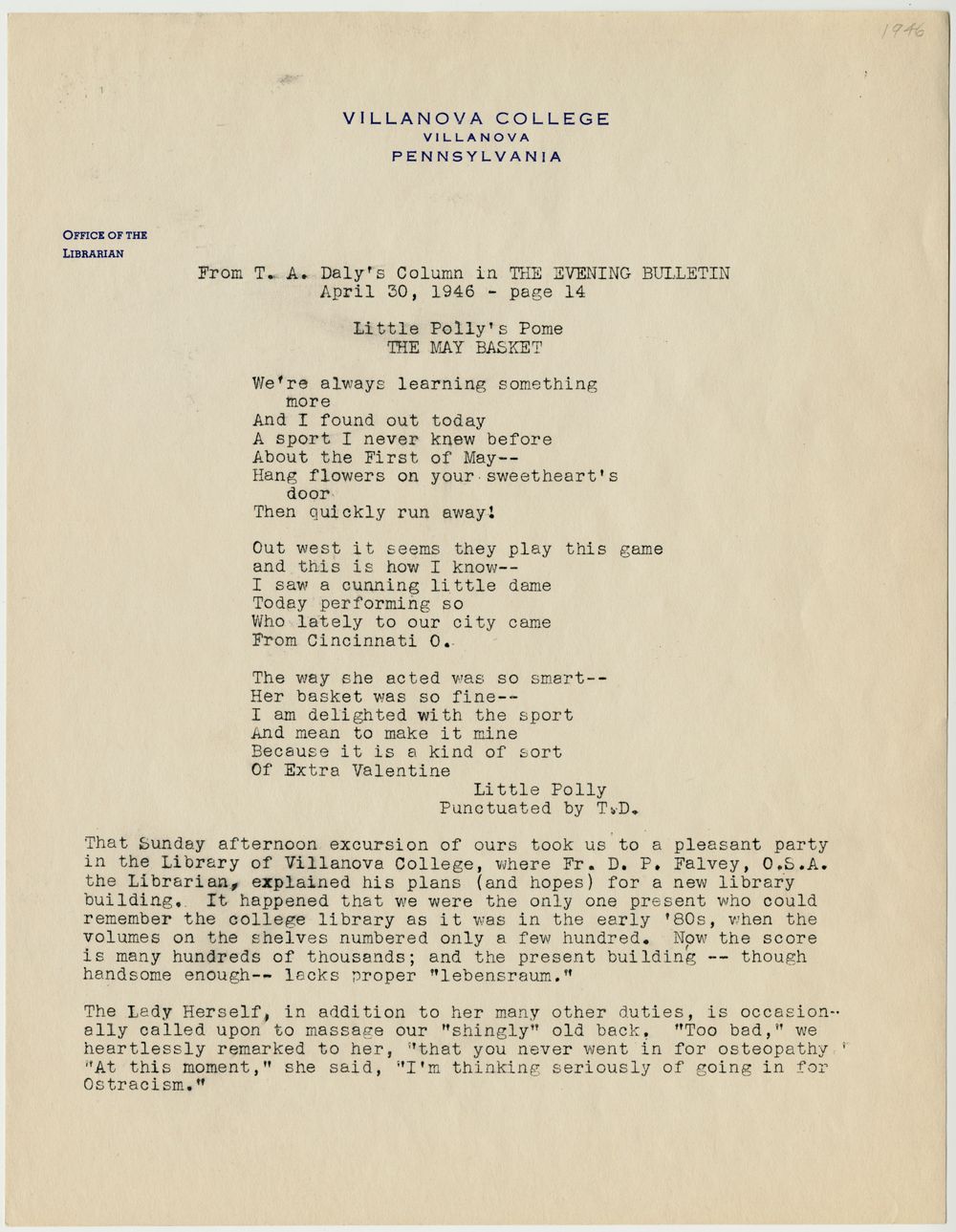 "That Sunday afternoon excursion of ours took us to a pleasant party in the Library of Villanova College, where Fr. D. P. Falvey, O.S.A. the Librarian, explained his plans (and hopes) for a new library building. It happened that we were the only one present who could remember the college library as it was in the early '80s, when the volumes on the shelves numbered only a few hundred. Now the score is many hundreds of thousands; and the present building -- though handsome enough -- lacks proper 'lebensraum.'

The Lady Herself, in addition to her many other duties, is occasionally called upon to massage our 'shingly' old back. 'Too bad,' we heartlessly remarked to her, 'that you never went in for osteopathy.' 'At this moment,' she said, 'I'm thinking seriously of going in for Ostracism.'"

The letters also document Daly's gift of four college notebooks, and his involvement in a "Friends of the Library" fundraiser for a new library building.