Though we have noted the many expedition narratives written for general audiences, fascination with the polar regions led to further adaptation in widely-read popular fiction. The second half of the nineteenth century saw a rapid climb in mass market printing of newspapers, story papers, and paperback fiction. These early paperback books, called dime novels for their cheap price of ten cents or less, often told sensational and entertaining tales of adventure and romance. Polar travel offered ripe plots for eager readers.

Items from the Art Curiosa Collection 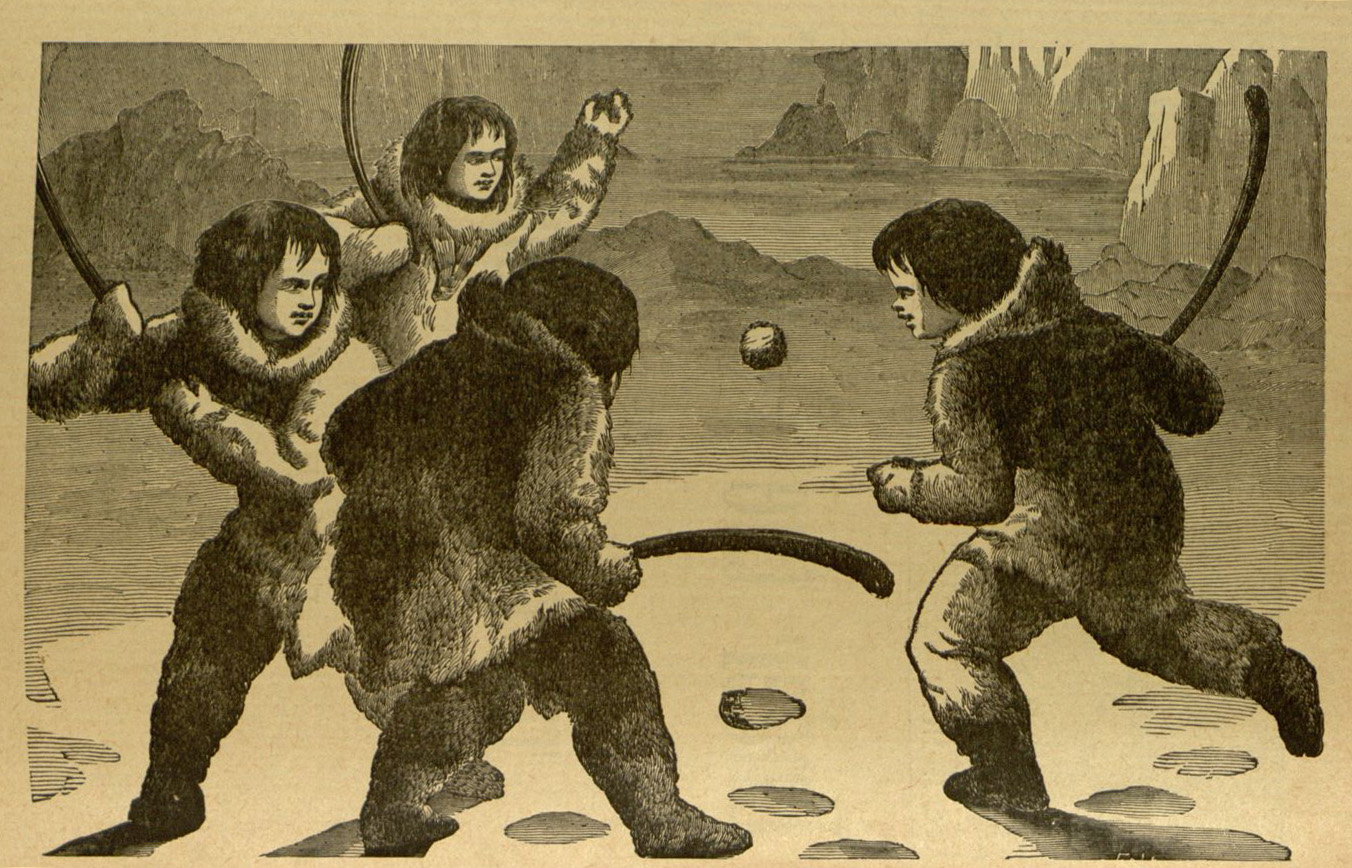 [Page 2], Under the Polar Star; or, The young explorers / by Dwight Weldon. 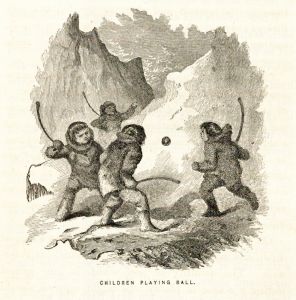 Weldon, Dwight. Under the Polar Star; or, The Young Explorers / by Dwight Weldon. New York : Albert Sibley & Co, 1886. (From the Art Curiosa Collection)

Sometimes true narratives quite literally influenced fiction, as in the example seen here of an illustration for the juvenile dime novel, Under the Polar Star, based on an engraving found in Elisha Kent Kane's Arctic Explorations, entitled "Children playing ball."

An advertisement for the Golden Library series claimed that:

The press, the pulpit, the parents and the general public cry out for bright, pure and attractive reading for boys and girls. Juvenile literature of the demoralizing kind only has heretofore been sold on the news-stands at cheap prices. The GOLDEN LIBRARY comes to the rescue of a long-suffering community. Its pages are full of interest, the stories are original, full of fire and brave endeavor for the right. It is not a goody-goody Sunday-school series. It will not cater to cant, hypocrisy, or violence of any kind. It is for the right, the bright, the pure, the honest, first, last, and all the time. It has no other mission than to supplant the bad with something good that shall be equally as attracting to the young of both sexes and of all conditions.

The publishers of the Golden Library series were right to look to Kane for inspiration for their morality tale. Upon his death American newspapers printed tributes of respect and honors to the "distinguished," "celebrated," "heroic," "noble martyr to science." (See Elisha Kent Kane Scrapbook, 1854-1857).

"Out with the Jeannette; or, Two Years Among the Icebergs" / by a Herald Reporter. Five Cent Wide Awake Library. New York: Frank Tousey, July 23, 1882. (From the Art Curiosa Collection)

This appears to be a story of historical fiction based on the voyage of the USS Jeannette. Published in July 1882, just after the first survivors returned to the U.S. in May of 1882, and written by a "Herald Reporter" the story follows the fictional young Tom Durham on the "Jeannette Polaris Expedition" to the North Pole, in search of an open polar sea. There is a would-be murder motivated by jealous romance, a run-in with a polar bear, and the inevitable wreck of the Jeannette. Captain De Long is portrayed as a "brave, dauntless explorer" and in the conclusion two of the three open boats make it to safety in the Lena Delta. Tom returns to New York and predictably gets the girl in the end. 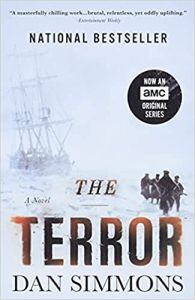 The Terror is a 2007 horror fiction novel by author Dan Simmons based on Sir John Franklin's lost expedition. The story features main characters who were actual real life members of the crew and the plot follows what is mostly known of the historical findings while filling in the rest with a supernatural twist. The HMS Terror and HMS Erebus are trapped in the Arctic ice amidst their search for the Northwest Passage. The characters suffer illnesses cause by improperly canned food, abandon the ships and begin to trek overland toward Back's Fish River (as detailed in the real-life Victory Point Note). Starvation leads to cannibalism. All the while they are pursued and hunted by a terrifying monster.

The novel was adapted into an anthology series of the same name which first aired on AMC in 2018.