The late 1960s was a celebratory time as Villanova was celebrating its 125th anniversary. The celebratory theme, "Heritage with a Purpose," was an ode to tradition and determination. Though in the background social forces were bringing rapid changes to the campus environment that could not be ignored by administration. From the 1950s, Villanova prospered with receiving university status (in 1958) and significant financial and student growth, but with prosperity comes tension with expansion and changing policies to meet current student and faculty needs. One of the most profound changes occurred in 1968, Villanova elected their first non-Catholic, Sidney Wolgin, to the board of trustees. This was a significant change to a 120-year charter dictating only Roman Catholics could sit on the board of trustees. The change was an opportunity for the university to seek public funds. In the same year, the first lay vice-president, Dr. James Duffy, was announced. The reevaluation of Catholic tradition were not just insular campus issues; for example, campus had to adapt to significant Church changes from Second Vatican Council. 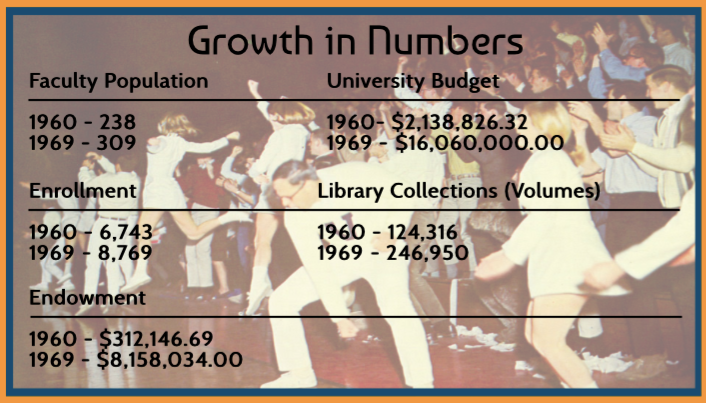 The conflict between tradition and change was most pronounced with increasing student rebellion against traditional values and policies. Some of the first rumblings of discontent were of general quality of campus amenities. Discontent over the quality of food to the point of food riots would occur, the first in 1967, when a student in the cafeteria claimed blood was caked in his glass of milk. He and other students threw trays, overturned tables, and many blocked traffic surrounding the monastery[1]. A similar scene occurred in December 1969 when a protest broke out at the residents' cafeteria in Dougherty Hall and spreading into the Pie Shoppe. 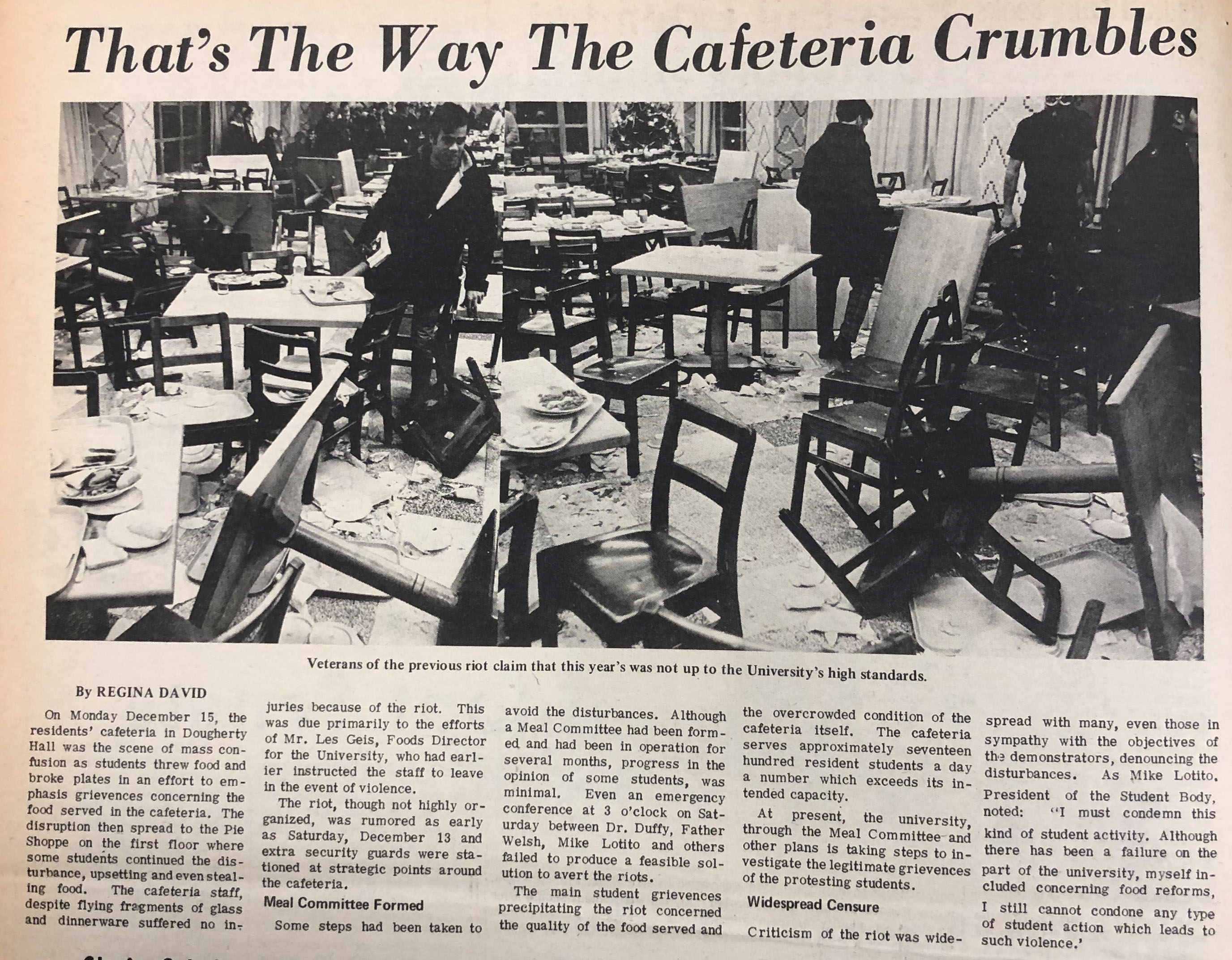 Students rebelled against school policies believed to be infringing on personal freedoms. Villanova had long held compulsory class attendance policies that were finally overturned, after years of complaints, in 1968. The dress code was a major issue for students as classroom settings were becoming less formal but wearing ties and coats to evening meals were still in the policy. Villanova, as a religious institution, had a mandatory religious service policy that was greatly detested. Students were expected to attend religious retreats annually, but, faced with outcry from students and a rise in lay professors apathic to enforcing religious traditions, the requirement was abandoned in the late 1960s.

Furthermore, the question of personal freedom came to head over visitation rights in the dorm rooms. Students saw it as an individual right to have guests, regardless of gender, in their dormitories, and the rules were "archaic social regulations," but the administration forbade it as part of a paretial policy. The policy was challenged in the fall of 1969, when seven women were put on probation for entering the men's dormitory. Students would continue to fight the policy into the 1970s. 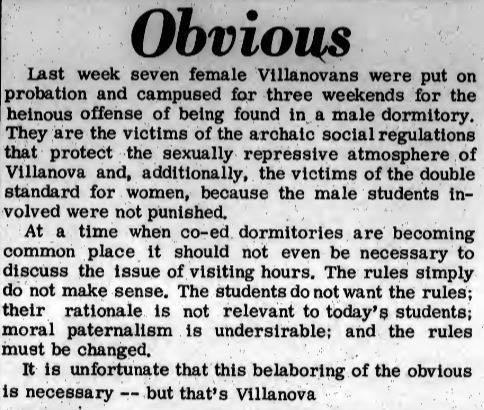 In April 1969, Villanova administration announced a tuition hike of $400 dollars for the following year, which led to a significant outcry. The announcement led to a sit-in on April 21-22 by 1,000 students at Tolentine Hall. The demonstration was successful, as the administration decided not to pursue the raise in tuition. Though a University Senate,  a forum where students, faculty, and the administration could discuss campus policies, finances, and changes, had been previously proposed, after the student tuition demonstrations and complaints, a University Senate was finally enacted. The confrontation spurred President, Rev. Robert J. Welsh O.S.A. to form a demonstration committee and announce a new policy in regards to mass demonstrations [2].

“A Search for Unity” 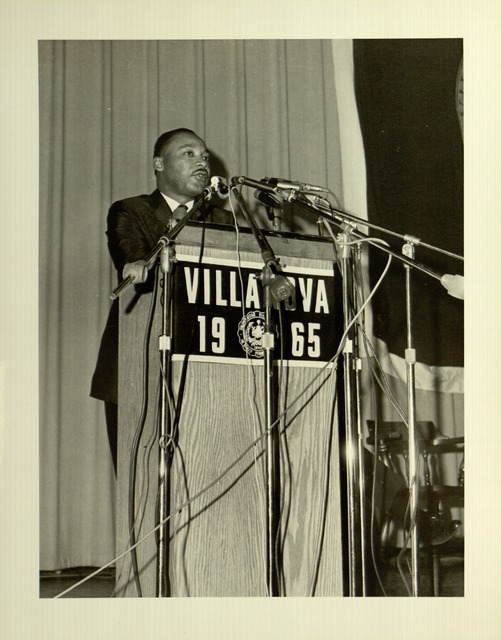 On the evening of January 20, 1965, more than 4,000 people packed into the Field House to hear Rev. Martin Luther King Jr. speak. King spoke of racial equality through love and direct action; that civil rights are obtainable and a right under democracy.

Prior to King's presence, civil rights and racial equality was briefly addressed on campus through The Villanovan editorials, guest lectures, classroom discussions, and hosting summer camps for kids from disadvantaged areas of Philadelphia, but the question of racial equality among Villanova students and administration did not become so visible until the late 1960s. For insistence, administration became increasingly concerned for student minorities to secure local housing so the Office of the Dean of Men would assist in locating off-campus housing.African American students embarked on community building for themselves and to engage with the greater campus community about racial equality. During this time, the Black Student League had started, the precursor to Black Culture Society.

*Please be advised, the issue contains historically violent images and language that may be potentially disturbing to some. 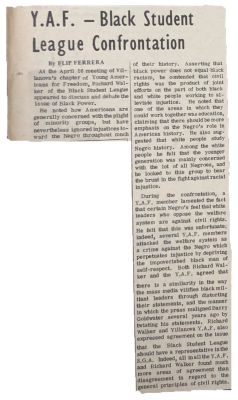