Imagine living in a time where a “path [became] a lane and then a street”; where towns that were once multiple days journey apart were suddenly only hours away from one another. (Lane 5)  These were the changes Lane witnessed during his entire life and the “inauguration of the great and everlasting system of railways” which Lane believed, “wrought such a revolution in the modes of travel and transportation.” (Lane 279)  Before investigating Lane’s own experiences and emotional response to the advent of the great railway systems in 19th century America, a quick look at the history of such an important modern marvel is necessary.

The first use of a locomotive was in the latter part of 1827 when “the Deleware and Hudson Canal Company put the Carbonal Railroad under construction” which extended from the “head of the Deleware & Hudson Canal at Honesdale, Pennsylvnia, to the coal mines belonging to the Delaware & Hudson Canal Company at Carbonale, a distance of about sixteen miles.  This line was opened, around 1829, and the locomotive was operated partially by stationary engines, and partially by horses.” (Dulken 221)  Shortly after this, another engine was built by Foster, Rastrick & Co and was named the “Stourbridge Lion”.  The name of this engine was extremely appropriate when one takes a look at the written account of a Mr. Allen,  who had the honor of taking the “Lion” down the track making him the first man to ride aboard a locomotive in America!  Here is Allen's account of that  exhilarating and terrifying experience written in 1884, almost 60 years since his “ride”:

When the time came, and the steam was of the right pressure, and all was ready, I took my position on the platform of the locomotive alone, and with my hand on the throttle-valve handle said:  “If there is any danger in this ride it is not necessary that the life and limbs of more than one should be subjected to that danger.”

The locomotive, having no train behind it, answered at once to the movement of the hand; … soon the straight line was run over, the curve was reached and passed before there was time to think as to its not being passed safely, and soon as I was out of sight in the three miles’ ride alone in the woods of Pennsylvania.  I had never run a locomotive nor any other engine before; I have never run one since.” (Curtis 102 - 103)

In 1834, at the age of nineteen, Lane took his first ride on the then “longest railroad in the world – ‘The Charleston and Hamburg.’”  In his account of this experience, as in many of his traveling experiences (be it by foot, horse, boat or train), Lane almost never failed to mention the distance he had traveled as well as the time it took to complete the aforesaid journey.  This emphasis on time and distance makes sense coming from a man whose home town, Suffield, Connecticut did not have railways until much later in his life and who himself made regular trips by foot or carriage during his early life.  Stepping on a train that could complete a hundred miles under twelve hours (starting at “eight o’clock in the morning and [arriving] at six o’clock in the evening”) must have felt quite miraculous to a man like Lane. (Lane 64)

But unfortunately for Lane, in 1834, locomotives were not yet equipped with improvements such as “air brakes” and other comforts that his own children had the luxury of experiencing.  For him and others in his time, the journey of a train rider in Lane’s era would look something like this:

[A common passenger] was jammed into a narrow seat with a stiff back, the deck of the car was low and flat, and ventilation in winter impossible.  A stove at each end did little more than generate carbonic oxide.  The passenger roasted if he sat at the end of the car and froze if he sat in the middle… the dust was suffocating in dry weather; there were no adequate spark-arresters on the engine, or screens at the window, and the begrimed passengers at the end of his journey looked as if he had spent the day in a blacksmith-shop.” (Curtis 234-235)

In addition to these early discomforts on the railways of the early 19th century, Lane recounts another discomfort of training one’s way around while taking his very first train ride upon the “Charleston and Hamburg”, the then (1834) “Longest Railroad in the World” traveling from Charleston, SC to Hamburg, GA:

Here, for a mile or two, the grade was so heavy that the locomotive could not be safely used, and a stationary engine, with the necessary hoisting apparatus was being erected for the purpose of raising and lowering trains; though I presume as steep grades are now overcome, easily, with the improved locomotives, air brakes, and other appliances in use at the present time. The only way we had of getting from this summit to Hamburg the western terminus of the road, was by hand cars, similar to those now used by track repairers, only larger, navigated by negro power. The first half of the distance, however, did not require much power, of any kind, owing to the down grade, over which we rushed at the rate of 30 or 40 miles an hour, but the last half started both the sweat, and the peculiar odor, of the cable manipulators of the cranks. (Lane 64)

Despite these minor glitches, the railway system in America made travel more swift and  encouraged the success in America’s Industrial Revolution all the while helping citizens like S. A. Lane keep in frequent touch with his beloved family and friends throughout his life, especially in his last years. Throughout his long life, Lane rode on many a train during his travels around America (primarily on the East Coast).

Here are some excerpts of the different railway lines Lane mentions in his memoir:

…the then terminus of the Aspinwall and Panama Railroad,  From Barracoa to Aspinwall,  twenty miles, by rail, the fare was eight dollars, each. The route was through an entirely uninhabited chaparal; the grade being comparatively easy, and slightly descending nearly the entire distance. (Lane 233)

…I accordingly made the necessary arrangements to go, and with my good wife, and the two youngest children – Arthur M. and Carrie M – left Akron for New York, on the Atlantic and Great Western Railway, on Friday evening, October 7th, arriving in New York on Saturday evening. (Lane 277)

Then, about the middle of June, the good daughter, Carrie, with her husband and their two children, Agnes Belle and Frederick Arthur, made us a brief visit, and on their return to Schenectady, N.Y. whither they had removed, since our previous visit to them, in 1881, father and mother accompanied them, leaving Akron via the Valley Railway, at noon June 26th 1883 –– (Lane 329)

Though aware that all the uncles and aunts had passed away, and that the most of the cousins were either dead or scattered abroad; yet being so near, I concluded to run up from Utica, on the Utica and Black River Railroad, and look up the widow of my lately deceased cousin, Curtis G. Lane, and their only son, Daniel Webster Lane, for a number of years a prominent clothing merchant in Lowville. (Lane 330)


[In New York.]  After a very pleasant sojourn among our very pleasant friends in the very pleasant valley of the Connecticut, of about two weeks, on July 24th, we went by rail to New York, to visit “Our Boy Fred”, then working at his trade, pressman and engineer, in that city. The only places of interest visited, during our brief stay of a little less than two days, were the “Big Bridge”, Greenwood Cemetery,  and the Battery, not failing, however, to ride from one end of the city to the other – about ten miles – upon the elevated Railway.
(Lane 333)


Having finally completed our visit, we bade the dear ones good by, on Tuesday, August 14th, 1883, at 11.30 P.M. ticketed  through to Akron, via the New York Central and Lake Shore Railways. Reaching Brocton , a few miles west of Dunkirk (Lane 334)


The “skirmishing” just alluded to, resulted in the selection of a small, but “well fortified” farm in the southern portion of my native state, Old Connecticut, some three or four miles from the villages of Westport and Saugatuck, on the New York and New Haven Railroad, and about midway between those two cities and in close proximity to Long Island Sound. (Lane 438) 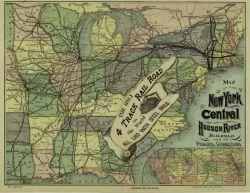 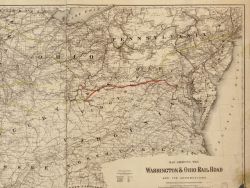 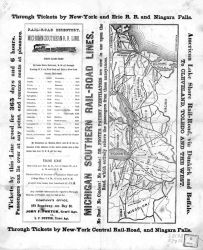 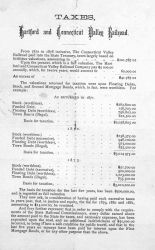 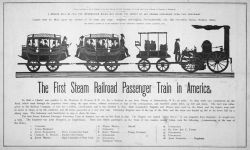 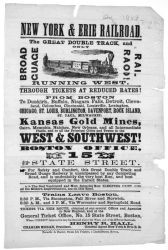 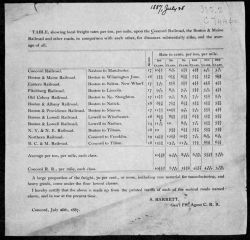 8. Table, showing local freight rates per ton, per mile, upon the Concord railroad, the Boston & Maine railroad, and other roads, in comparison with each other, for distances substantially alike, and the average of all ... Concord, July 28th, 1887.
Printed Ephemera Collection; Portfolio 96, Folder 16.