Rebecca Cole graduated from the Institute for Colored Youth in 1863. With a total score of 8.21/10 on her final examinations, Cole finished fourth in her class of five. She went on to become a physician and spent her career providing care to poor women and children.

Rebecca was born sometime around 1846 to Joseph Cole, a laborer, and Rebecca Cole. Like many of the families in the Institute community, education was a central part of the Cole family, and all of the children received some form of schooling.

After graduating from the Institute, Rebecca went to the Women’s Medical College of Pennsylvania. She graduated in 1867, after completing her thesis “The Eye and Its Appendages.” According to the National Library of Medicine, Cole was the second African American woman to receive a medical degree in the United States.

Upon leaving the Women’s Medical College of Pennsylvania, Cole went to New York to work at Dr. Elizabeth Blackwell’s New York Infirmary for Women and Children. While in New York, Cole worked as a “sanitary visitor,” tasked with visiting poor mothers and instructing them on proper childcare and on maintaining family hygiene. She also practiced medicine in South Carolina, but by 1870 had returned to Philadelphia. In 1873, she opened a Women’s Directory Center, which provided medical and legal services for poor women and children.

For her intellect and accomplishments, Cole was the pride of the city’s African American community. For example, on June 30, 1885, Cole spoke at the annual commencement of her alma matter, the Institute for Colored Youth, on the topic “Epidemics, Their Causes and Prevention.” The reporter for The Christian Recorder could not contain his praise for Cole’s talk:

The paper of Miss Rebecca J. Cole, M.D., read at the commencement of the Institute, was a scholarly production, presented in a scholarly style. It contained entirely too much light to be put under a bushel. Can it not be given to the world? It should be circulated by the million. Not a word of it is wanting in force, nor a principle in place. Few superior compositions on similar topics are presented to the world by the medical fraternity. It is the gospel needed next to the Gospel.

Cole also responded to W.E.B. DuBois’s conclusions about blacks in Philadelphia. Through the course of his research for his 1899 book The Philadelphia Negro, DuBois came to the conclusion that blacks suffered from high mortality rates from consumption due to ignorance of hygiene. Cole was quick to counter DuBois’s claim, blaming the high mortality rates instead on white doctors who did not properly care for their African American patients, especially poor families.

In 1899, Cole was appointed Superintendent of a home for destitute women and children in Washington, D.C. The home was run by the National Association for the Relief of Destitute Colored Women and Children, an organization formed in 1863. While the home took in approximately ten women at a time, the primary focus appeared to be the children, who received care, education, and assistance in finding permanent homes. In their 1899 Annual Report, the officers of the organization praised their new Superintendent:

Dr. Cole herself has more than fulfilled the expectations of her friends. With a clear and comprehensive view of her whole field of action, she has carried out her plans with the good sense and vigor which are a part of her character, while her cheerful optimism, her determination to see the best in every situation and in every individual, have created around her an atmosphere of sunshine that adds to the happiness and well being of every member of the large family.

By 1910 Cole was back in Philadelphia. By this time she was serving as the head of household for a “Home for the Homeless.”

Rebecca Cole never married. When she was not residing in the homes she ran, she lived with family or lodged with others. She died on August 14, 1922 and was buried at Eden Cemetery. 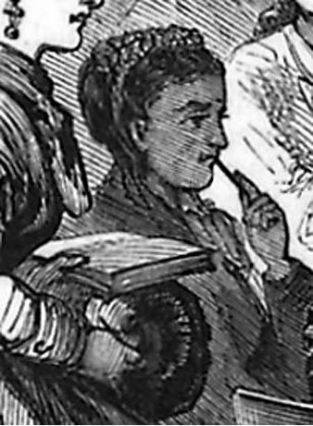 Image: This is most likely a sketch of Rebecca Cole, the only known image of her. This image was part of a sketch of a medical lecture that appeared on April 16, 1870 in Frank Leslie's Illustrated Newspaper.