Joseph White graduated from the Institute in 1861 and worked as a carpenter. The younger brother of George and Jacob C. White, Joseph served as treasurer of the Association of Alumni in 1861, and in 1863 he chaired the association. At the May 1863 ICY examinations, Joseph and his brother Jacob delivered talks, followed by Reverend Henry Highland Garnett, at the school on the occasion of the annual examination. Joseph died in 1876 from tetanus, eight months after his 20 month-old daughter, Ursaline died of tuberculosis. Father and daughter were buried at Lebanon Cemetery. 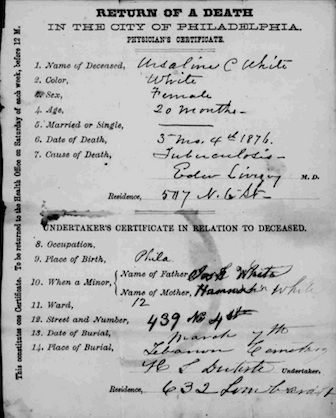