Caroline LeCount was one of five students to graduate from the Institute for Colored Youth in May 1863. Her overall score on the final examinations was 8.83/10, first in her class. She went on to become a public school teacher and principal in Philadelphia and an active member of the city’s African American community.

Caroline was born sometime around 1846 to James and Sarah LeCount in Philadelphia. James was a cabinetmaker who also plied his woodworking skills at making coffins and the undertaking business. Like many black families with means in Philadelphia, the LeCounts were most likely involved in the Underground Railroad. According to a family story, one day a LeCount cousin snuck into the coffin room during a game of hide-and-seek. The child found live people in the coffins; slaves James was helping escape. The couple appeared to have four kids: James (c. 1845), Caroline (c. 1847), William (c. 1848), and Ada (c. 1852). William is missing from the 1860 census, but the other three started school at a young age and eventually graduated from the Institute for Colored Youth.

After graduating from the Institute, LeCount began a career in teaching. In 1865, she began teaching at the Ohio Street School, where fellow Institute graduate Cordelia Jennings served as principal. By 1868, LeCount herself was principal of the school.

For nearly fifty years, LeCount worked at the Ohio Street School. During this time, she was also a leading advocate of African American teachers in the city. In August 1891, when the city was looking for a new principal for the Wilmot Colored School in Frankford, LeCount addressed the school board, recommending one of her teachers. According to reports, she explained that this man, Burton R. Young, was “fully qualified for the position,” and added that “colored children should be taught by their own.” In 1880, after a school board official suggested that African American children were lagging behind and blamed inferior black teachers, LeCount led the defense. Her public response pointed out, among other things, the black teachers had to perform better on the certification exam than white teachers (70% vs. 65%). Her public letter prompted one newspaper editor to describe her as “a match for all of the officers and members of the Board of Education combined.”

Outside of the classroom, LeCount was a leader of the city’s African American community. During the war, she supported the Union war effort, especially African American troops. Among other things she served as an officer in the Ladies’ Union Association; in that capacity she helped organize fairs and supply collections to benefit soldiers. In April 1866, on behalf of the club she sent General Benjamin Butler clothing. In her letter to Butler, she told the General that the women had chosen him over Generals Grant, Sherman, and Sheridan, citing specifically his actions on behalf of African American troops.

LeCount was also a well-known speaker. She spoke or recited poetry at various events, including at the opening of the new Institute for Colored Youth building in 1866, at an 1873 fundraiser for the Seventh Street Presbyterian Church, at an 1880 fundraiser at St. Thomas’ Presbyterian Episcopal Church, and an 1881 fundraiser for the Home for Aged and Infirm Colored People, among other things. In May 1882, at an event for the Scientific and Art Association, The Christian Recorder commented on her reading of “Conquest Rang the Bell” that her “elecutionary powers are too well known to admit of any praise.” A gifted orator, LeCount was also known for performing stories in dialect, especially “spot-on” Irish accents.

Perhaps LeCount is best known for her efforts against streetcar segregation in Philadelphia. During the war, streetcar transportation was becoming an important part of the daily lives of black Philadelphians. This was especially the case for women, who organized efforts and supply collections to support African American troops stationed at Camp William Penn and elsewhere. But the segregation of the streetcars influenced a new generation of African American men and women to push for equal rights. One tactic practiced by African American women across the country was to defiantly board streetcars, knowing that they would be forcibly removed, even manhandled, by the conductors. These women then appealed to the courts, seeking redress in the courtroom and also in the court of public opinion. On March 22, 1867, Pennsylvania passed a law banning streetcar segregation. Three days later, LeCount and a friend eagerly sought to board a streetcar. When the conductor refused to stop, but “sneered at them as the car passed on,” LeCount took a copy of the new law to the nearest police officer, who arrested and fined the conductor.

Caroline LeCount, who retired in 1911, never married. She was engaged to fellow Institute graduate, teacher, and activist Octavius V. Catto, who was murdered on Election Day on October 10, 1871. Following his death her school was renamed to honor Catto. She died on January 24, 1923, and was buried on January 27 at Eden Cemetery. 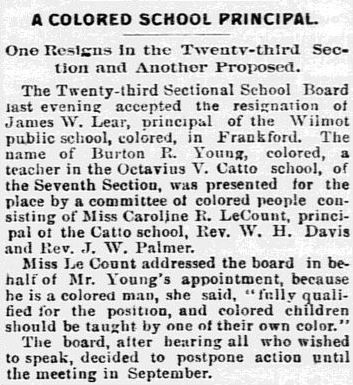