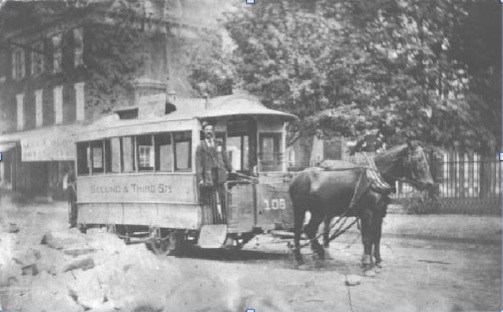 Camp William Penn in La Mott is a short ten miles straight up Broad Street from the former site of the Institute for Colored Youth on Lombard Street.  If you drive it today, it should not take you more than forty minutes, but because of traffic, it can be an hour.  What about if you walked?  Three hours.  THREE HOURS!

When it opened in June 1863, Camp William Penn was of deep and abiding interest to black Philadelphians, as it was the first dedicated training camp for the United States Colored Troops. Between 1863 and 1865, Camp William Penn trained eleven regiments.  The camp was a busy place, then, bustling with the coming and going of more than 11,000 men and all the food, clothing, and supplies that they needed to ready themselves for deployment.  Their friends and family were keen not only to help meet these needs but also to come see the men off when they left to the battlefields of the South.   And, when the men returned wounded or ill, their mothers, fathers, and siblings were eager to visit them as they convalesced, either at the camp or at one of a number of hospitals in and around Philadelphia.

But there was a problem.  None of the city’s eight horse-drawn street-car companies allowed black passengers to ride on an equal basis as whites.  On some lines, black passengers had to ride standing up in the front of the car behind the horse, and on others, the friends and family of the colored troops had to wait for a “colored car” to be carried to their destination.  This situation may have been tolerable before the war, but as the war progressed and more black men enlisted in the army, Philadelphians of color could no longer accept that while their husbands and sons were good enough to die on the war’s battlefields, they could not ride in the city’s street cars.  So if a mother visited a USCT at Camp William Penn, she either waited for the segregated car or hired a private coach at considerable expense.  Those who tried to board the white-only cars were often violently removed from their seats and thrown from the cars. The situation had become intolerable.

In the rooms of the Institute for Colored Youth and in the city’s black churches, Philadelphians of color devised a three-pronged approach to desegregating the cars.  William Still, famous for his work helping fugitive slaves escape, collected petitions from white riders in an effort to convince the companies to change their policies.  By 1865, though, Still’s petition campaign had yielded little progress, and black riders continued to be subjected to humiliating and violent treatment aboard the cars.  In the meantime, young men and women who went to school and taught together at the ICY pioneered in more direct approaches.  At a well-attended and spirited meeting at the Union League Club of Philadelphia in June 1866, Octavius Catto entreated his audience to take up the issue as a matter of manly self-defense.  “Vindicate your manhood,” Catto demanded, “and no longer suffer defenseless women and children to be assaulted or insulted with impunity by ruffianly conductors and drivers.”   With the Pennsylvania State Equal Rights League, Catto and others of his ICY colleagues lobbied Republican state lawmakers to draft a law outlawing segregation on street cars and railroads.

Not content to await manly protection, 1863 ICY graduate and teacher at the Ohio Street School, Caroline LeCount joined other women in practicing what we would call civil disobedience—they road the segregated cars, forcing conductors and white passengers to decide for themselves what was fair and unfair.  This campaign was risky, as conductors did not hesitate to treat LeCount and other women roughly.  Women and men sustained serious injuries from these altercations.  William Still had long discouraged this kind of approach, as he feared it would embarrass the black community and would not yield the desired results.  Women like LeCount who in their work at the Ladies Union Association wanted to reach black troops with food and life-saving supplies, though, saw the matter differently.  So they road the segregated cars in direct violation of car company policies.  And when they were ejected from the cars, women took the matter before the city’s courts, suing the conductors and the street-car companies for compensation for the injuries they sustained in these altercations.  Women sometimes found judges who sympathized with them in their efforts to reach wounded soldiers and who awarded them damages.  But more importantly, these women began to win the sympathies of white riders who complained of the violent way in which black riders were treated.

The three-pronged approach worked.  On March 22nd, 1867, Pennsylvania Governor John Geary signed a law outlawing segregation on street cars and railroads. The law stated that any service given or withheld on account of race was prohibited, including compelling riders to sit in special seats or seating them apart from other riders. The law allowed judges to either fine or imprison (or both) conductors who denied service to black riders or those who employed subterfuge in order to avoid serving black riders on an equal basis with whites.

Three days after the law was signed, a conductor on the Lombard Street line refused service to Caroline LeCount, taunting her by saying, “(w)e don’t allow niggers to ride.”  LeCount lodged a complaint with the nearest police officer who claimed to know nothing about the new law.  LeCount must have expected this reaction, for she carried a notice of the law with her and showed it to the officer.  The police officer arrested the conductor and fined him $100.   The incident revealed that even though the law had changed, black Philadelphians—many of them teachers like LeCount and Catto—still had their work cut out for them, teaching city residents what black civil rights meant.