FALVEY MEMORIAL LIBRARY
Home Search Guides Help
You are exploring:  Library  >
Exhibits Home  >
A Great Thing for our People: The Institute for Colored Youth in the Civil War Era

"You cannot think how proud I am of that Institute and how grateful I am to the Managers for its Library, its Schools, its lectures, and its colored teachers. Oh, it is a great thing for our people."

These were the words of a mother to a teacher at Philadelphia's Institute for Colored Youth in May of 1857. Opened in 1852 at 716-718 Lombard Streets, the Institute was funded and managed by Quakers. Institute faculty and students were some of the best and brightest of the city's African American community. Graduates of the school became teachers, physicians, government employees, diplomats, and businessmen and women. They acted as leaders for the African American community, supported the Union war effort, and worked for equal rights as citizens of the United States. Institute teachers and student made their mark in Philadelphia and in cities across the United States--and even around the world.

"A Great Thing for Our People: The Institute for Colored Youth in the Civil War Era" explores the lives of the men and women who graduated from the Institute between 1852 and 1866, when the school moved from its site on Lombard Street to a new location in the city. In addition to biographies of these first thirty-seven graduates, the project also presents important moments during the Civil War Era in which these men and women played integral roles, reaffirming the praises of that unnamed mother that the Institute for Colored Youth was indeed "a great thing for our people." 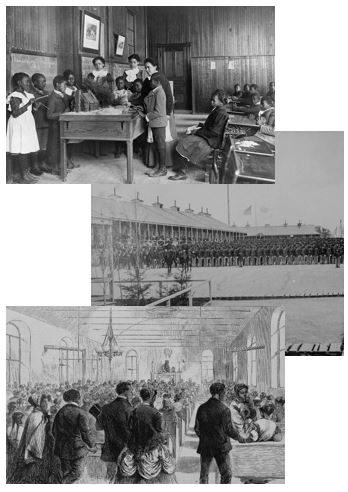 Posted by Rev. Elisha B. Morris on Feb 8th, 2014
I plan on attending the exhibit on next Tuesday, February 10, 2015 from 3 pm to 5 pm. Thanks to Dr. Judith Giesburg and the students for this research.
Posted by Christopher Densmore on Feb 9th, 2015
Very nice and well laid out exhibit. I'm a bit surprised, however, to see nothing from the records of the Institute for Colored Youth which are at Friends Historical Library of Swarthmore College. The records concerning the Institute are quite extensive though they deal primarily with the governance of the school. Presumably there were at one time record books giving the names and grades of individual students, but these appear to have been lost. Another useful source are the articles about the Institute published in Quaker periodicals which often give detailed accounts of graduation ceremonies with names of students and teachers, and also the subjects of student orations.
Posted by ICY Team on Feb 9th, 2015
Mr. Densmore,

You can rest assured that we did consult the materials from the Richard Humphreys Foundation Records. In fact, the time Michael Johnson spent in the Friends Historical Library was where the project got started. We relied heavily on the Managers' Annual Reports to provide the names and information about the graduates. In addition, the Annual Reports and the Managers' Minutes from their Monthly meetings were crucial to understanding the history and missions of the Institute during this period.

Thank you for checking out the site, and for your suggestions!

Posted by Thomas Swain on Feb 26th, 2015
This exhibit seems very inviting, especially for those interested in Cheyney University and Philadelphia African Americans. After a review of graduates in your time frame, I found a possible connection with the (African American) Shaker community that lived at 522 South Tenth Street. The Shaker community existed from 1857 to 1864 and beyond to be mentioned in DuBois's study of 1899. The Journal of Rebecca Jackson, a black Shaker who was the leader of this group of Philadelphia Shakers, mentions an Andrew Jones as among the Shakers. An Andrew Jones appears in your list of graduates. It would be interesting if there was a connection. It would be interesting to know of any connections with Mother Bethel Church too.
Posted by Attwell Lineage on Mar 28th, 2015
Our great-great grandmother Cornelia Jennings was a graduate of the Institute, and her mother Mary MacFarland Jennings an educational pioneer in her own right. The Institute served as a magnet for promising minds from remarkable families of varied backgrounds, and spawned educational success across the United States for people of color. I am hopeful that your project will serve as a magnet to surface many stories of exceptional leadership and community among African Americans.
Posted by Laurie Bernstein on Sep 29th, 2015
Thank you for all the work you did in creating this site. I recently moved to a building directly behind 915 Bainbridge, at 610 South Percy Street, that I think was an annex of the Institute. It was built in 1883 and was turned into the Samuel J. Randall Public School #2 at the same time the Institute became the Samuel J. Randall Public School #1. Do you have any information on my building? I am looking into its history for the purposes of seeing whether it too qualifies for historical designation. I would be happy to share with you what I've found out about 610 South Percy. Thanks for your time.
Posted by F. Keith Bingham on Oct 21st, 2015
Dr. Giesberg and her students have done excellent work constructing this site. It will prove invaluable to researchers into the history of African American education in the Ante-Bellum period in Philadelphia. We are hoping to have Judith come to Cheyney for a "walk through" the website in the future.
Posted by Melva L Florance on Jul 7th, 2018
I have only just happened upon the site and it was quite by accident while refuting a comment someone made on Facebook. It was a picture of two trucks with two Confederate flags each on the back and it said "Newflash Pennsylvania wasn't part of the Confederacy." And I am astounded everyday of how clueless people really are at how those labels and imaginary lines meant nothing. There were Union sympathizers deep in the heart of the Confederacy as revealed in the movie Free State of Jones, which so many people avoided seeing but was a very good movie. And there were pockets of Confederate strongholds in Union states like Pennsylvania. There were Union strongholds in Confederate States like North Carolina. People always ask me why does it matter now and I always answer we have to get to the bottom of these lies. Ferret out where they began and dispel them from there. For example, Octavius Catto was killed in the streets in cold blood. He had a gun but there wer no bullets in it. He was going to buy some. There was a witness that claimed he pulled the gun but others who were adamant he didt. He was shot four times in the back and his killer got off scott free. That story has been told and retold for almost 150 years. How much longer before we get tired of it? Maybe if we really hear all of these stories we will really start to get it.
Posted by Wanda Stuart on Aug 28th, 2018
You all are fantastic I appreciate the paraphrases you shared. This to is excellent work too! Thank you so much!
Posted by Wanda Stuart on Nov 13th, 2018
I would love to visit Swarthmore and Cheyney University, so I can continue writing for Mr. Octavius V. Catto. It would be a pleasure to get explicit information on the real true so I can write for real. Please respond!