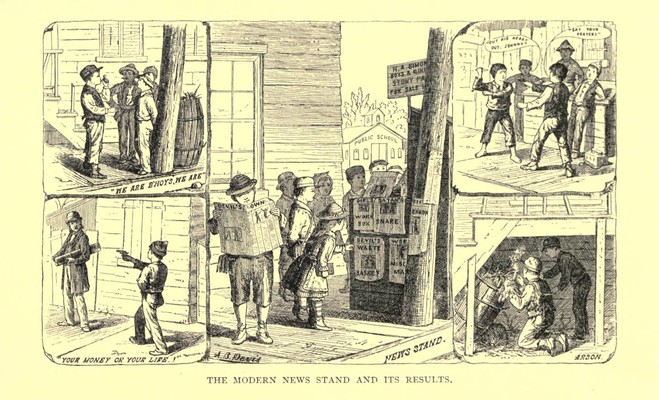 The dangers of popular entertainment, as portrayed in Comstock's Traps for the Young . 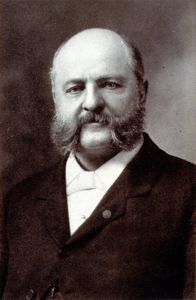 Whenever a new form of entertainment captures the attention of children, some groups of adults tend to become alarmed and scapegoat entertainment for other problems.  This has been seen recently with video games, in the 1950’s with comic books and rock music, and, unsurprisingly, in the 19th century with penny dreadfuls and dime novels.  Charges of immorality and corruption of youth were periodically leveled against the books.

A British example condemning penny dreadfuls can be found in James Greenwood’s essay, “Penny Packets of Poison.”[1] By the 1890s, the dreadfuls and their kin were being blamed for a variety of extreme actions, including suicide and matricide.[2]  In America, one of the most vocal critics of dime novels was Anthony Comstock, an agent of the “New York Society for the Suppression of Vice” and author of an 1883 book called Traps for the Young which accuses dime novels of being “sure-ruin traps” that can lead to children’s minds being “cursed for life.”[3]  Similar views can also be seen in newspaper editorials; for example, an 1866 essay in the labor-oriented Workingman’s Advocate accused popular fiction of “not doing less in the work of ruin than the rum-shop or the house of ill-fame.”[4]  Nearly twenty years later, the same opinions existed, as evidenced by a critical 1884 New York Tribune editorial.[5]  Dime novels were also blamed in at least one murder case, that of Jesse Pomeroy, who “had no doubt that the reading of those books had a great deal to do with his course.”[6]

It is hard to say exactly how widespread anti-dime attitudes were, but an informal survey of former dime readers conducted by Edmund Pearson produced at least anecdotal evidence that many children read dime novels in secret and that parents, if they did not forbid the books outright, at least tended to discourage the reading of such “trash.”[7]  A study of British court cases by John Springhall demonstrates that cheap fiction was sometimes factored into the legal process, even when the links between entertainment and crime were tenuous at best.[8]  The publishers did their best to defend themselves – Beadle and Adams, for example, frequently printed their publishing guidelines in their books, which included a promise to “prohibit all things offensive to good taste,” among other things,[9] and advertising made frequent claims about the wholesomeness of dime novel content.[10]

Although morality and public safety were usually cited when criticizing dime novels, other reasons lurked beneath the surface.  In class-conscious Britain, there were concerns about “low newspapers and low periodicals” working their way into the homes and minds of higher-class children.[11]   Similar attitudes can be found in American history, where public libraries founded with the paternalistic goal of providing culture to working people often systematically excluded popular fiction, and sometimes fiction in general.[12]  Economics also played a significant role.  Fanning the flames of a “moral panic” sells papers and potentially damages publishing competitors.[13]  In one very specific example, Ainsworth Rand Spofford, the Librarian of Congress, while speaking before a Senate committee, used arguments about certain novels endangering “the morals of the community” when his primary goal was to eliminate discounted postal rates exploited by dime novel publishers so that libraries and higher-end publishers could benefit from more favorable shipping costs.[14]

By modern standards, the contents of the dime novel that seem most shocking were not cause for much concern at the time.  The books contain a high level of violence, and many adventures featuring boyish heroes are not shy about allowing their protagonists to use firearms.  Racial and ethnic stereotypes pervade the stories, with Native Americans faring particularly badly.  Herburt Asbury, author of Gangs of New York, reported that his “grandfather, himself a forty-niner and with several years’ experience among the Indians, was always violently opposed to the novels that purported to describe life among the red-skins, for he said that they were packed with lies and were unfair to the Indian.”[15]  The Indians were in good company – nearly every group imaginable was given an embarrassing portrayal somewhere during the dime era.  Some of this can be attributed to popular attitudes of the time, and some to lazy writing: a broad stereotype is an easy way to drop a distinctive character into a hastily-written narrative without needing to exercise much creativity, and with no popular concept of political correctness in place, this was done without restraint.  Although portrayals of minorities in dime novels were not exclusively negative – many characters are heroic and noble regardless of their origins – even the positive portrayals often seem insulting and reductive to the modern reader.  Women may have fared slightly better than ethnic minorities – an essay by Janet Dean argues that the dime novels’ frequent use of disguise and secret identity sometimes helped break down strict assumptions about gender roles.[16]

10. For one example, see the reference to "clean, wholesome stories of adventure" in the Alger advertisement in Project Gutenberg's edition of Frank Merriwell's Backers.