FALVEY MEMORIAL LIBRARY
Home Search Guides Help
You are exploring:  Library  >
Exhibits Home  >
Are We There Yet?  >
Imaginary Travels

Fictional accounts of travel, adventure, and exploration are a genre of literature that centers on fictional characters’ accounts of real or fictional places. The quality of the descriptions in realistic stories varied – at times descriptions and facts in these works were inaccurate or falsified – and sometimes the locations were overshadowed by the characters. Purely imaginary stories, on the other hand, were sometimes presented in a seemingly factual way and sometimes in a completely fanciful way. 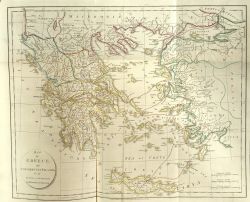 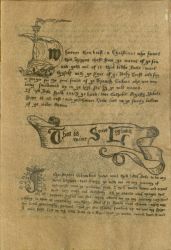 Jean-Jacques Barthélemy was a classical scholar and Jesuit in the 18th century. This multivolume work, an early example of historical fiction, was an imaginary travel journal about a fictional descendant of the early 6th-century philosopher Anacharsis. The book was quite popular, going through multiple editions as well as being translated into several languages. Barthélemy describes the government, customs and culture of Greece, though most of the information is inaccurate. Several of these fictional travel accounts mirrored true travel narratives and despite the inaccuracies in the fictional narratives, many readers believed them to be accurate accounts (Arthur 198).

This is a work purporting to be the “secret” logbook of Christopher Columbus thrown into the sea during a storm and “retrieved” 400 years later along the English coast. The book is manufactured to look like a water-damaged manuscript and also includes some decorative shells glued onto the cover. The writing (in English!) and several anachronisms in the text quickly dispel any possibility of this being a genuine historical artifact. 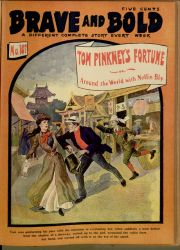 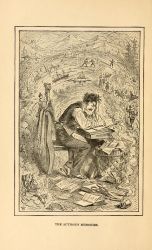 Baron Munchausen is a fictional German nobleman created by the German writer Rudolf Erich Raspe. The character is loosely based on a real baron, Hieronymus Karl Friedrich, Freiherr von Münchhausen. The real Baron Münchhausen was known for his tall tales about his life’s adventures and Raspe anonymously adapted these into his novel.

"Tom Pinkney's Fortunes" adds a fictional character to tag along on real-life reporter Nellie Bly’s 1889-1890 race around the world.

Mark Twain's A Tramp Abroad, an autobiographical narrative with fictional elements, tells the story of Twain’s second trip to Europe. The narrator’s companion in this book is a fictional character named Mr. Harris (based on one of Twain’s real-life friends). In addition to the main travel narrative, there are also fictional stories woven into the text. 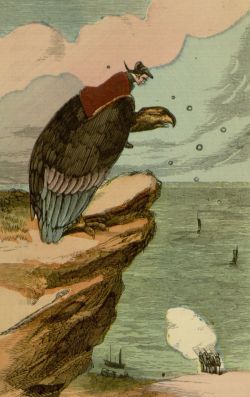