A few blocks south of Lancaster Avenue, on a section of Ardmore’s historic Main Line, lies Walnut Avenue, a tightly packed suburban street that quietly houses many of the townships day to day laborers and townsfolk. In both the past and today, modest sized dwellings line the comfortable, quaint suburb, a peaceful neighborhood that contrasts itself to the hustle and bustle of Lancaster Avenue. In regards to the district as a whole in 1920, it did not differ too much from the standard; in fact, Walnut Avenue serves as a fairly accurate representation of the entire region at the time. Every person who lived in this section of the street was white, and many were the blue collar laborers that helped build, support, and maintain Ardmore’s image of a bustling town just outside of inner city Philadelphia. In general, the population of Ardmore war 88% white, and lived in houses similar to that of Walnut Avenue, moderately sized, stand-alone houses.

One hundred and thirteen people made this small part of Ardmore Township their home, within 24 average sized households. All of the inhabitants of this street were white, and being Irish was a common denominator. Twenty one of the 113 people living here were direct immigrants from Ireland, and twenty three of them have at least one parent of direct Irish descent. Being a highly blue collar area, house ownership was outside most resident’s financial ability; only one house was officially owned and not rented. A wide array of workers lived here, ranging from laborers, a fireman, a policeman, a painter, an usher, a butcher, carpenters, and a filing clerk. While nobody on this street pulled in nearly enough money to be considered a member of the upper class of Ardmore’s wealthy gentry, these people were by no means under the poverty line, and likely were prime examples of the lower middle class, a group who made the gears turn in society nearly 100 years ago.

“Gears” is by no means an exaggeration. While the individual occupations differed a good deal, the industries these people worked in had one quite common denominator: the Autocar Company of Ardmore.  A staggering 48 percent of the residents of Walnut Avenue worked at the three story auto company, making the street not only a solidly blue collar neighborhood, but also a relatively unified district in terms of employment. Ardmore’s massive car company, especially relative to the 1920s, was perhaps a 5 minute walk from Walnut Avenue, a quick turn off of Ardmore Avenue would put you right in front of the company. The close proximity of the company to the suburban workforce helped to characterize the area and bring in a real sense of benefit to the community, as Autocar, just as its workers, were a product of Ardmore.

The street is also home to a young population. In terms of age, nearly 75 percent of the residents were under the age of 30. This “youthful” side of the populous is statistically more significant than Ardmore’s already large youth rates. These young people, who were mostly unskilled laborers, were able to work in the Autocar Company, an establishment that employed many young men as well as a significant chunk of the immigrant population. According to the maps of Irish, Italian, and African Americans in Ardmore, Walnut avenue was one of the densest populations of Irish people.

What this street exemplified was cohesiveness in class, ethnicity, and age. A large swath of the population was under the age of 30, giving the street a distinct youthful side. A very large percentage of the workers, over 50 people, worked for the Autocar Company, bringing not only similar paychecks, but the potential for a community in Walnut Avenue integrated by industry. These people lived on the same street; most likely walked or at least used the same commute, and worked in the same industry. Many of the residents were of Irish decent, and several others were immigrants either from Ireland or elsewhere in Europe. In the end, Walnut Avenue’s role in 1920 Ardmore was a sort of backbone to the community, housing the workers and immigrants that made the society strong. 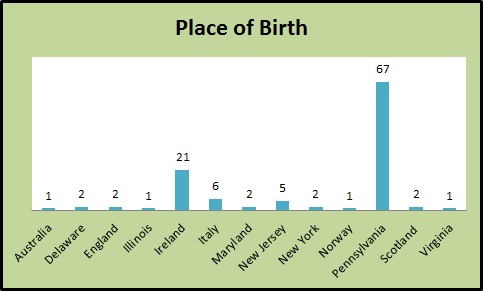 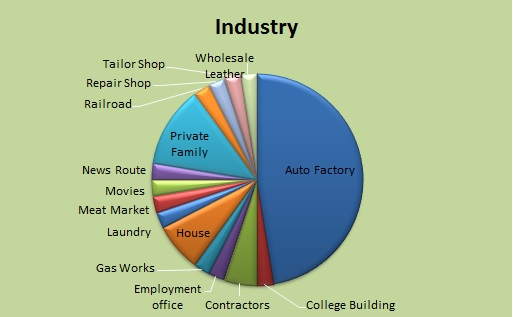 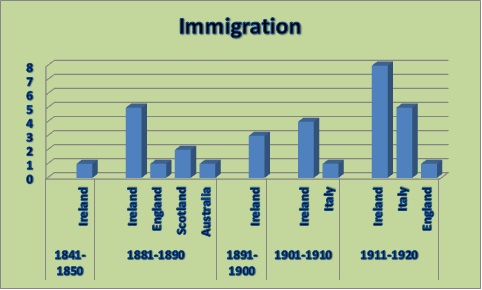 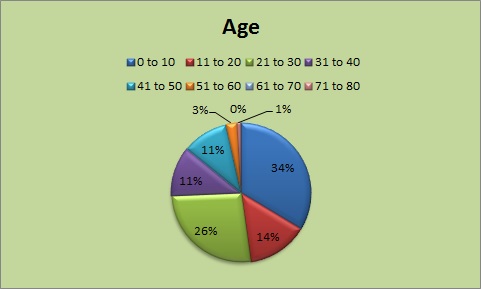