A society formed in Belfast and Dublin in 1791 by Theobald Wolfe Tone to agitate for parliamentary reform and equal religious rights. Initially led by Protestant merchants and professionals from Belfast and Dublin, its members included both Protestants and Catholics. Later it became militantly anti-English and republican, and in 1795 was driven underground. 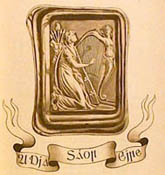 Seal of the United Irishmen. It was designed by Robert Emmet and the original was cut in an emerald brought from India.

Tone, Theobald Wolfe
An Argument on Behalf of the Catholics of Ireland

Theobald Wolfe Tone (1763-1798) first published this pamphlet in August 1791 under the signature of AA Northern Wig. It demonstrated that there was a need for a reform of the Parliament, and also a need for the creation of a close alliance between the Catholics and the Presbyterians.

Other Titles In The Display

The Beauties of the Press : with an Appendix containing the Speech of Arthur O'Connor on the Catholic Question in the House of Commons of Ireland on Monday, May 4, 1795 ; also his Letter to Lord Castlereagh.

The Press was the newspaper of the United Irishmen. It was published under increasingly difficult circumstances from September 1797 to March 1798, when its presses were seized by government soldiers.

Belfast Politics: Or, A Collection of the Debates, Resolutions, and other Proceedings of that Town, in the Years M,DCC,XCII and M,DCC,XCIII...

Burk, John. History of the late War in Ireland: with an Account of the United Irish Association from the first Meeting at Belfast, to the Landing of the French at Kilala.

Extracts from the Press...

Subtitle: A Newspaper published in the Capital of Ireland, during Part of the Years 1797 and 1798, including Numbers sixty-eight and sixty-nine, which were suppressed by Order of the Irish Government before the usual Time of Publication. The editor was arrested for printing a report on the trial of William Orr, who was sentenced to death for administering the oath of the United Irishmen.

Ireland. Parliament. House of Commons. Report from the Committee of Secrecy of the House of Commons in Ireland, as reported by the Right Honourable Lord Viscount Castlereagh, August 21, 1798.

Ireland. Parliament. House of Lords. Report from the Committee of Secrecy