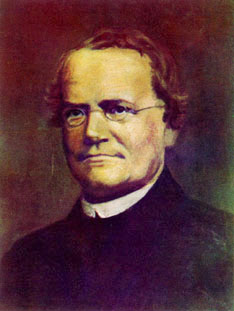 Web exhibit illustrating the life and scientific contributions of Gregor Johann Mendel, O.S.A., in the field of biology and genetics, and the history of the Mendel Medal Award presented at Villanova University to honor the achievements and memory of Mendel, as well as other outstanding scientists. Gregor Johann Mendel, an Augustinian, was born in 1822 in Heinzendorf Moravia in what is now the Czech Republic. He entered the Augustinian Monastery of St. Thomas at Brünn (now Brno) at the age of 22 and was ordained to the priesthood in 1847. For the next twenty years he taught science in secondary school and during this time, began his experiments in the monastery garden which were to result in his discovery of the basic laws of heredity. His findings were published in 1866. Using the garden peas for his subject, Mendel's studies in "plant hybridization" proved the existence of paired elementary units of heredity (now called genes) and established the statistical laws governing them. Subsequent scientists have refined his conclusions and discovered the system of particulate heredity by units or genes. The materials exhibited are from the Villanova University Archives and the Augustiniana Collection of the Special Collections in Falvey Memorial Library.