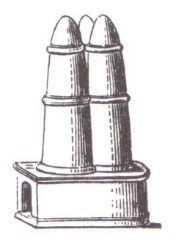 An illustration of a meta, the sturdy turning posts what would have been on both ends of the spina.
Illustration: Krank-Hover, Wikimedia Commons, CC BY SA 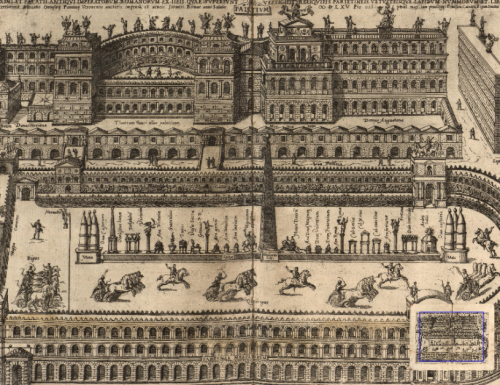 An illustration from Panvinio’s De Ludis Circensibus which shows a chariot race in progress, and the layout of a typical Roman circus.
by Onofrio Panvinio via Villanova Digital Library - http://digital.library.villanova.edu/Item/vudl:75216

Chariot racing was by far the most popular spectacle of ancient Rome. Attendance at the races far surpassed theater performances and gladiatorial games. The races took place in massive purpose-built structures called circuses. The Circus Maximus, the largest in all of the Roman Empire, could hold an estimated 150,000 people, the Coliseum, Rome’s largest arena could hold just 50,000. Races took place as part of festival days to honor gods or prominent men. Both Julius Caesar and Sulla declared annual race days in honor of their accomplishments. Consequently, race days were frequent, with as many as 60 or more in a given year (Meijer 2010).

Chariot racing was already an ancient tradition by the time of the Romans. Chariots were frequently used in Greek warfare. It was also one of the principal events of the Panhellenic Games (Kyle 2007). Book 23 of the Illiad recounts the chariot race that took place at the Funeral games of Patroclus (Kyle 2007). 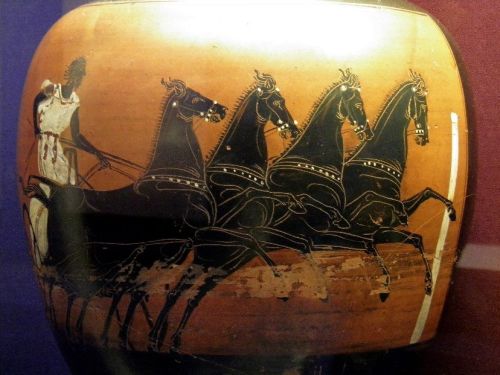 A Greek vase depicting a charioteer and quadriga, found in Cyrenaica (modern Lybia). This vase was made in Athens would have been a prize given to the winner of the quadriga race at the Panhellenic Games.
Photo: Carole Raddato, Wikimedia Commons, CC BY SA

All circuses consisted of an oblong race track with a long stone divider called a spina running down the center. Two large stone metae on either end of the spina served as turning markers. They were built to be sturdy, to withstand the force of any crashes. The track itself consisted of fine sand to allow for greater speed and reduce dust as much as possible during the race. Though no literary evidence attests to it, the track almost certainly would have needed to be raked in between races; otherwise the uneven track would slow the racers down (Meijer 2010). Lap counters were mounted on the spina, at the Circus Maximus these were seven dolphins (each race was seven laps) that would dip down into water as the racers completed each lap (the dolphin was a symbol of Neptune who was also associated with horses and horsemanship) (Harris 1968, Meijer 2010). Unlike at gladiatorial games and theaters, seating was not segregated by gender. It was segregated by class however, and the wealthiest Roman had the nearest seats to the track. 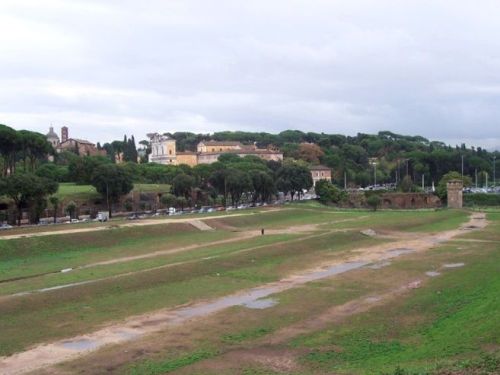 The remains of the Circus Maximus in Rome. Notice the raised middle section where the spina was.
Photo: MarkusMark, Wikimedia Commons, image in the public domain

The horse trade spanned the entire Roman world, and racing horses came from as far as Turkey, Spain, and Cappadocia, but the most prized race horses came from North Africa according to inscriptions. Selective breeding was common, and the most successful horse trainers were highly sought. The chariots themselves were light, (probably weighing 25-35 kilograms) made of thin wood slats and leather. They were designed for speed, and therefore not particularly sturdy. There were two common varieties, bigae, designed for two horse teams, and quardrigae for four horse teams. Each chariot was brightly painted with the color of its faction. The charioteers wore leather helmets and padding to protect them in a crash. They usually carried a knife or dagger so that they could cut themselves free of the reigns, which they wrapped around their torso for better control, if they were being dragged behind their chariot (Meijer 2010). 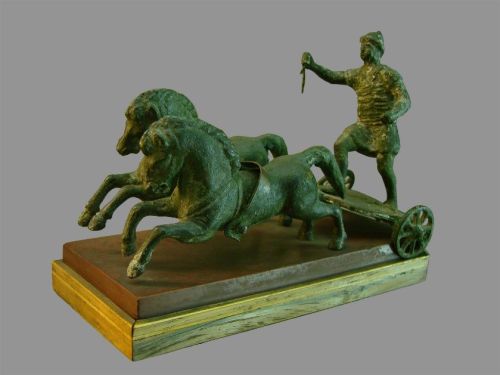 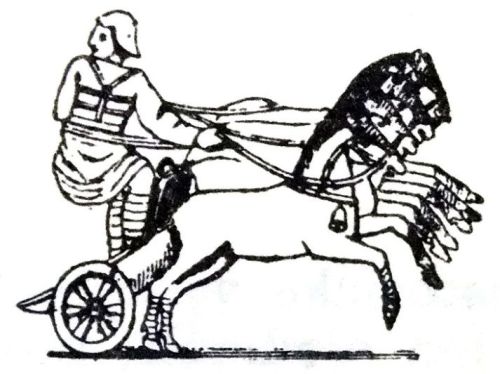 An illustration of an agitator on a quadrigae, with the reigns wrapped around his torso.
Illustration: Anonymous author, Wikimedia Commons, image in the public domain

The drivers were almost always freedmen or slaves, the lowest ranks of Roman society. There were two types of charioteers: The younger, inexperienced charioteers were called auriga and raced two-horse chariots (bigae). It was the older, more experienced men, called agitatos, who raced the four-horse teams (quardigae) that were the main event of any race-day (Meijer 2010).

Charioteers could quickly gain status and wealth. Most drivers started out as slaves, and would hope to eventually accumulate enough winnings to purchase their freedom. Consistent winners, and fan favorites could become immensely wealthy. Despite the appeal and stardom of successful charioteers, they were still viewed as disreputable by Roman society. They possessed infamia in the same way that gladiators and actors did. The profession of chariot racing was closely associated with slavery, and thus somewhat disdainful to Roman citizens (Meijer 2010).

Rome had four professional racing stables called factions; the Blues, Greens, Reds, and Whites (and briefly the Golds and Purples). Each faction was associated with a particular season and god. The Blues and the Greens were the largest of the racing houses, and the fiercest rivalry.

These factions were for-profit organizations, much like a modern professional sports team. Factions employed drivers and provided horses, equipment, and training in exchange for a portion of a driver's winnings. They also employed a large number of support personnel to assist the drivers, such as; doctors, horse trainers, stable hands, and veterinarians (Meijer 2010).

Typically twelve charioteers competed in each race, three from each faction. It was common for racers of the same faction to work together, by maneuvering and blocking opponents, to ensure that their favored teammate won (Meijer 2010).

It is not clear how a person came to be a fan of a particular faction. It is likely that different factions represented certain neighborhoods or trades. Regardless of how a person chose his or her favorite team, rivalries were bitter, and often violent, both on the part of the charioteers and their fans. Some emperors are identified as fans of certain factions, particularly "bad emperors" such as Nero and Caligula. Their fervor also often resulted in violence (Meijer 2010). 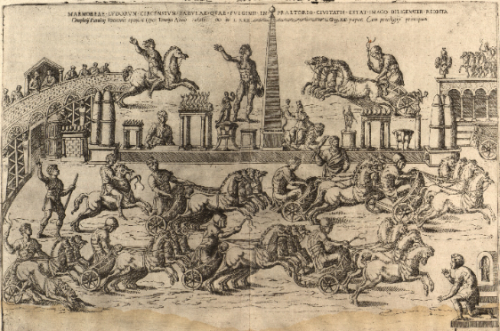 Another of Panvinio’s illustrations, this one depicts the four horse quadriga, which was the main event of a race day.
by Onofrio Panvinio via Villanova Digital Library - http://digital.library.villanova.edu/Item/vudl:75216

Typically 24 races took place in one day. Quadriga races were the main event, and constituted most of the day’s races, but there were always some bigae races as well as spectacle races. Spectacle races were typically absurd or unusual races, such as 10 or 12-horse chariot races. There were horseback races as well, but these were not nearly as popular (Meijer 2010).There were other spectacle events such as the Trojan Games, a mock chariot battle, and the pedibus ad quadrigam. The exact nature of this spectacle is unknown, but it seems to have been a duathlon style chariot and foot race. The name implies that the drives raced on foot to their chariots and then raced in them (Matz 1985).

The Romans put a lot of time and effort into making the races as fair as possible. Racers drew lots for starting positions. Starting gates were used to prevent false starts (Harris 1968). If a false start did occur, the official in charge of the races would call all the racers back to the start line, a difficult process. Racers were required to stay within their lane for two laps, after that they were free to jockey for the best position and inside track. This is the point where the race became the most dangerous, and collisions were most common (Meijer 2010). 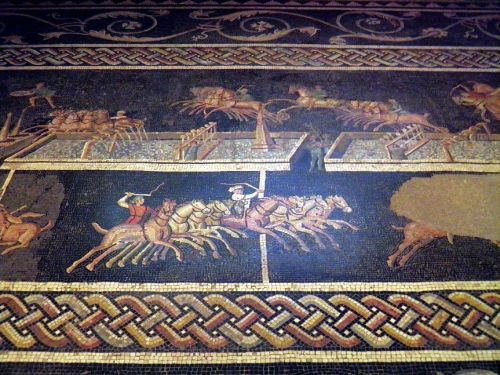 2nd century mosaic from Lyon. The drivers wear a tunic of their faction’s color. Note the water filled spina with dolphin and egg lap counters. It is even possible to see that it is the fourth lap.
Photo: Carole Raddato, Wikimedia Commons, CC BY SA

The above illustration by Panvinio shows the chaos that can occur during a race. The four horse quadriga races (depicted) were especially prone to violent collisions because of their high speed and the large number of horses on the track. Also note the do
by Onofrio Panvinio via Villanova Digital Library - http://digital.library.villanova.edu/Item/vudl:75216