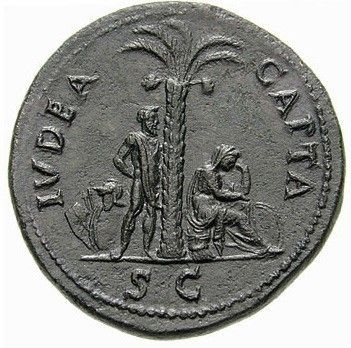 A Roman coin from the reign of emperor Vespasian with the emperor's face on one side and the words Judea Capta "Captured Judea" on the other.
Photo Credit: Iudaea capta reverse of Vespasian sestertius, CC-BY-SA CNG coins, Wikimedia Commons 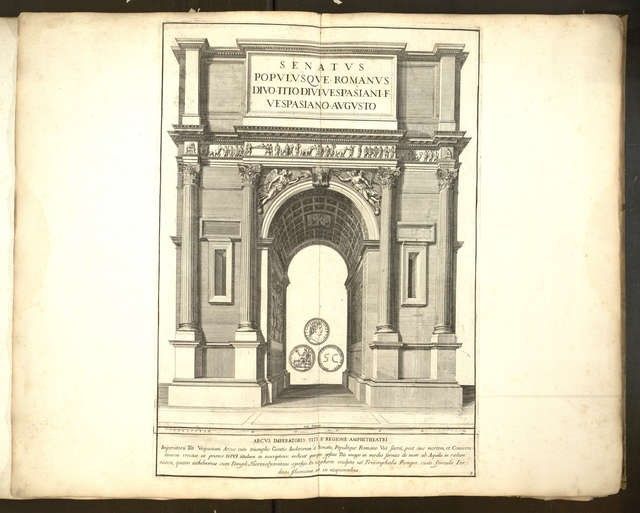 The Arch of Titus towers over the east end of the Roman Forum.  It is the entry point of the Sacra Via that runs along the northern border of the forum.   It was dedicated to the Divine Emperor Titus, son of Vespasian, and it honored his victory over Jerusalem in 70CE.  Titus succeeded his father and ruled for only two years from 79-81 CE.  Uniquely, the arch is not specifically mentioned in any historical text so the exact date of its construction is debated.  It is thought that Domitian, the next emperor, had the arch built to honor his brother.  Its completion must be after 81CE because Titus has to be dead in order to be deified.  The procession depicted in the eastern facing frieze includes a corpse being carried on a stretcher (ferculum). This body is often interpreted as the personification of the River Jordan, a symbol of Judea where Jerusalem is located.  Coins were also minted with a captured Judea personified.  The arch is famous for its reliefs located on the north and south side of the interior. The reliefs depict the triumphal procession of Titus, honored for his destruction of Jerusalem.  On the south relief, the spoils of war are displayed as part of the procession: Trumpets, the table of Showbread, and the menorah.  These three items were housed in the Temple of Jerusalem and their presence represents the conquering of the Romans over Jerusalem.  The north relief on the interior depicts Titus himself during his triumphal procession.  Titus is driving a four-horse chariot or quadriga. The figure behind him is the goddess, Victory, holding a crown over his head.  The lictors, the emperor’s attendants, can be seen holding a bundle of sticks called the fasces.  The fasces were a symbol of the emperor’s presence and power.  At the top of the inside of the arch is a sculpted bust of Titus being elevated to heaven on the wings of an eagle.  This scene depicts the deification or apotheosis of Titus.  Modern arches have been modeled on the Arch of Titus, especially Napolean's Arc de Triomphe in Paris which maintains the same proportions but is larger. 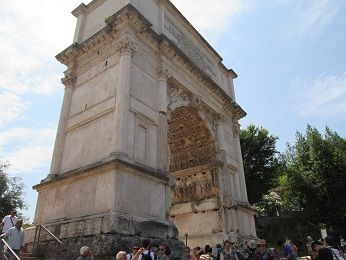 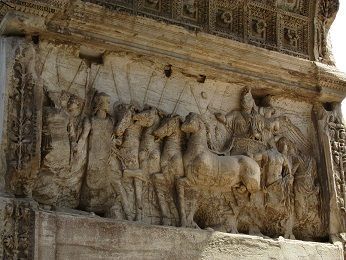 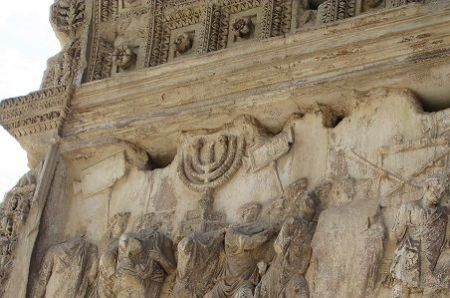 Arch of Titus, South Interior Frieze. The triumphal procession with the treasures taken from the Temple in Jerusalam
Photo Credit: Daniel Bluth (2013) 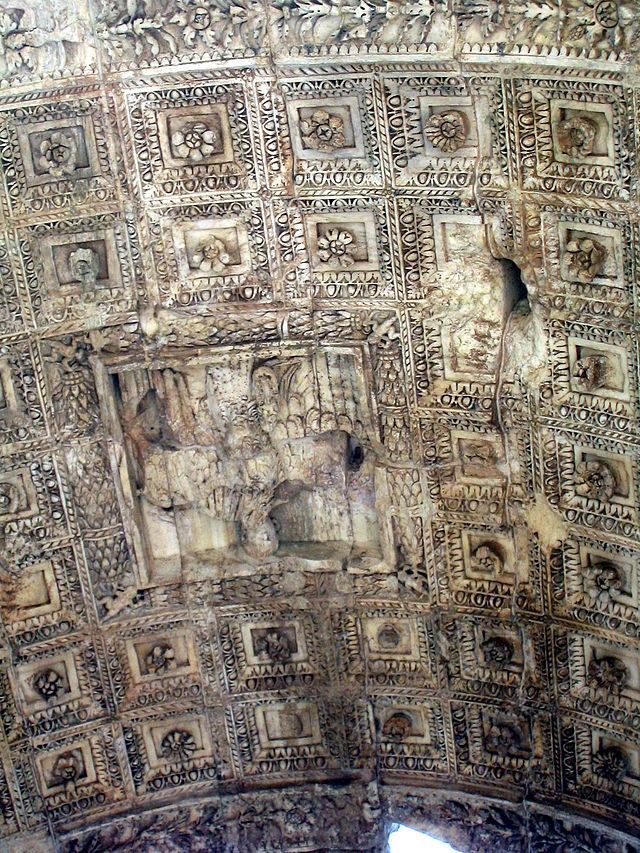 Chapman, Honora Howell. WHAT JOSEPHUS SEES: THE TEMPLE OF PEACE AND THE JERUSALEM TEMPLE AS SPECTACLEIN TEXT AND ART Phoenix, Vol. 63, No. 1/2 (Spring-Summer/printemps-été 2009), pp. 107-130. Classical Association of Canada