The Workshop of Pheidias

The centerpiece of the sanctuary at Olympia is the colossal Temple of Zeus, a perfect model of the classic Doric order Greek temple. Built between 472 and 456 B.C. by the local architect Libon of Elis, the temple is dedicated to the god Zeus, and houses a giant statue created in his likeness by the great sculptor Pheidias.The temple has carved metopes and triglyph friezes, along with pediments filled with sculptures from the Severe Style. 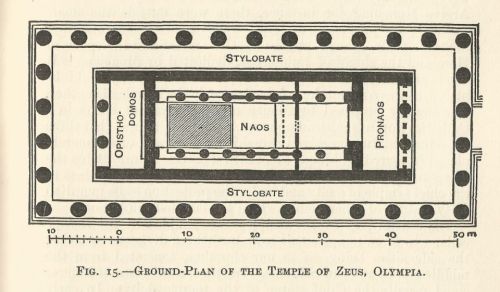 Plan of Temple of Zeus from A Manual of Greek Antiquities by Percy Gardner and Frank Byron Jevons (New York: 1895), pg. 175. Image from the public domain. Scanned from print copy.

According to the ancient traveler Pausanias (from here), who was incredibly impressed during his visit to Olympia: "Many are the sights to be seen in Greece, and many are the wonders to be heard; but on nothing does Heaven bestow more care than on the Eleusinian rites and the Olympic games.The sacred grove of Zeus has been called from of old Altis, a corruption of the word "alsos," which means a grove. Pindar1 too calls the place Altis in an ode composed for an Olympic victor. The temple and the image were made for Zeus from spoils, when Pisa was crushed in war by the Eleans1, and with Pisa such of the subject peoples as conspired together with her. [...] The temple is in the Doric style, and the outside has columns all around it. It is built of native stone. [5.10.3] Its height up to the pediment is sixty-eight feet, its breadth is ninety-five, its length two hundred and thirty. The architect was Libon, a native. The tiles are not of baked earth, but of Pentelic marble cut into the shape of tiles." 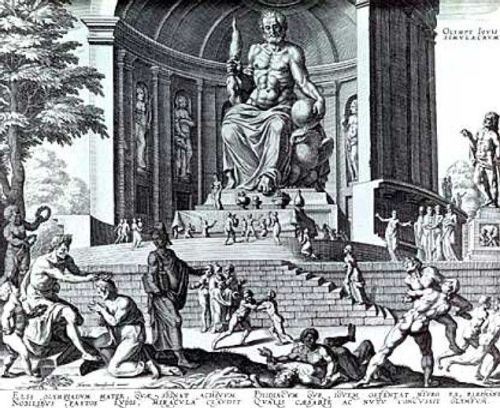 A reconstruction of Pheidias's statue of Zeus at Olympia, in an engraving made by Philippe Galle (1572), from a drawing by Maarteen van Heemskerck. Image from the public domain, Wikimedia Commons. https://commons.wikimedia.org/wiki/File:Statue_of_Zeus.jpg

About the statue of Zeus, Pausanias says, "The god sits on a throne, and he is made of gold and ivory. On his head lies a garland which is a copy of olive shoots. In his right hand he carries a Victory, which, like the statue, is of ivory and gold; she wears a ribbon and--on her head--a garland. In the left hand of the god is a scepter, ornamented with every kind of metal, and the bird sitting on the scepter is the eagle. The sandals also of the god are of gold, as is likewise his robe. On the robe are embroidered figures of animals and the flowers of the lily.  The throne is adorned with gold and with jewels, to say nothing of ebony and ivory. Upon it are painted figures and wrought images. There are four Victories, represented as dancing women, one at each foot of the throne, and two others at the base of each foot. On each of the two front feet are set Theban children ravished by sphinxes, while under the sphinxes Apollo and Artemis are shooting down the children of Niobe. Between the feet of the throne are four rods, each one stretching from foot to foot."

When discussing how the Greeks worshipped the statues of gods and goddesses at Olympia, Pausanias says, "And the Greeks in my opinion showed an unsurpassed zeal and generosity in honoring the gods, in that they imported ivory from India and Aethiopia to make images [...] All the floor in front of the image is paved, not with white, but with black tiles. In a circle round the black stone runs a raised rim of Parian marble, to keep in the olive oil that is poured out. For olive oil is beneficial to the image at Olympia, and it is olive oil that keeps the ivory from being harmed by the marshiness of the Altis."

The Greek historian Strabo also visited Olympia during the Olympic Games and clearly admired the sanctuary, as told in his Geography (from here): "The temple is in Pisatis, less than three hundred stadia distant from Elis. In front of the temple is situated a grove of wild olive-trees, and the stadium is in this grove. Past the temple flows the Alpheius, which, rising in Arcadia, flows between the west and the south into the Triphylian Sea. At the outset the temple got fame on account of the oracle of the Olympian Zeus; and yet, after the oracle failed to respond, the glory of the temple persisted none the less, and it received all that increase of fame of which we know, on account both of the festal assembly and of the Olympian Games, in which the prize was a crown and which were regarded as sacred, the greatest games in the world. The temple was adorned by its numerous offerings, which were dedicated there from all parts of Greece." 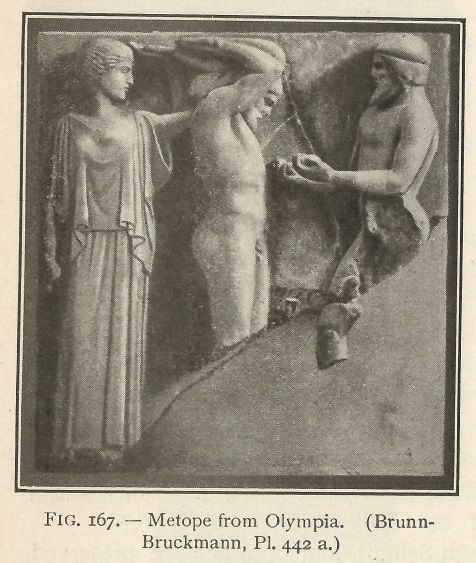 Metope and the East and West Pediments at Temple of Zeus, from A Handbook of Greek Archaeology by Harold North Folower, James Rignall Wheeler, and Gorham Phillips Stevens (New York, Cincinnati, Chicago: 1909), pg. 141. Images from the public domain. Scann 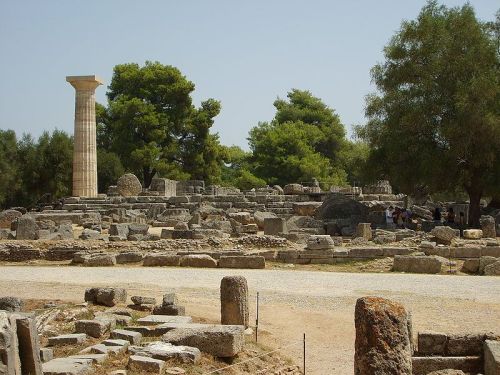