The Workshop of Pheidias

Undoubtedly one of the greatest Greek sculptors of the Classical period, Phedias (also known as Phidias) is the man said to have created the massive chryselenphantine (gold & ivory) statue of Zeus, one of the Seven Wonders of the Ancient World housed by the Temple of Zeus. According to the great ancient Greek traveler Pausanias, the words "Pheidias, son of Charmides, an Athenian, made me." (x)

Pheidias also desiged statues of Athena inside the Parthenon and in the monumental gateway that served as the entrance to the Athenian Acropolis.

In 1954-1958, archaeologists re-discovered Phidias' workshop, and their excavation revealed "tools, terracotta molds and a cup bearing the inscription 'I belong to Phidias.' Through these discoveries, archaeologists have been able to confirm the date of the statue and recreate the techniques used to build it." (x) 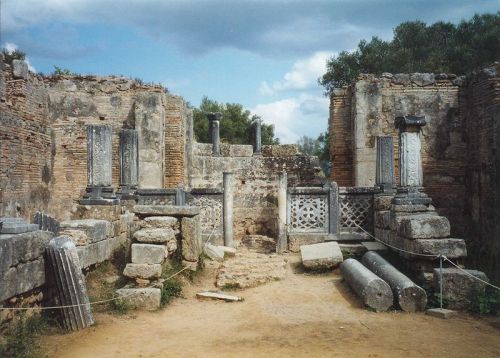