In 1916, Irish nationalist men and women rose up against England in an attempt to gain Ireland’s independence. For many centuries prior to 1916, the British had ruled Ireland and deprived the Irish of their rights, resulting in numerous Irish revolutions over the years. The Irish rising of Easter 1916, however, was unique in that it initiated the final steps towards Irish independence. The Rising of 1916 did not occur in isolation; rather, the support of the Irish American community was important to the Rising.

As Ireland prepares for the 100-year anniversary of the Easter Rising, Falvey’s Special Collections commemorates the event and its American connections in this exhibit of items held in the Joseph McGarrity Collection. This exhibit is broken into sections, some of which explore the events that influenced the planning of the Rising such as Irish revolutions prior to 1916, the resurgence of Irish culture at the turn of the twentieth century, and Ireland’s involvement in WWI. In addition to highlighting the events of the Rising and its aftermath, this exhibit also examines the roles that women and Americans played in the Rising. Finally, this exhibit looks at the lasting influence that the 1916 Easter Rising has had on Ireland.

Links to full-text scans of documents are included where possible.  These links lead to material in Villanova University’s Digital Collection, the Internet Archive, and the Hathi Trust Digital Library.

Special thanks to the many professional and amateur scholars of World War I and Irish history, literature and theater who supported this project both indirectly through their writing and directly by a constant willingness to answer questions and share information. 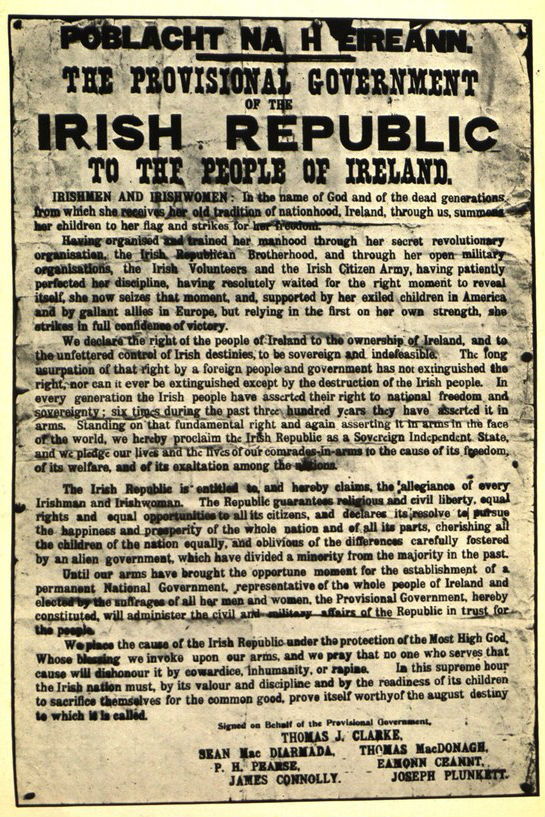 The Proclamation of the Irish Republic, in Dublin after the Six Days' Insurrection: Thirty-One Pictures From the Camera of Mr. T. W. Murphy, 1916, page 31. [Digital Library]