Thomas of Villanova - 450 years and Nicholas of Tolentine - 700 years

Falvey Memorial Library marked the 450th anniversary of the death of St. Thomas of Villanova with a special exhibit.  Villanova University derives its name from Santo Tomas de Villanueva de los Infantes.  A smaller portion of the exhibit celebrated the 700th anniversary of St. Nicholas of Tolentine, the first member of the Augustinian Order to be canonized.  Tolentine Hall is named in his honor.  The exhibit was jointly sponsored by the Augustinian Historical Institute and Special Collections of Falvey Memorial Library.  Rev. Karl Gersbach, OSA, Bente Polites, and Bernadette Dierkes were responsible for the exhibit.  Michael Foight assisted in digitalizing the exhibit. 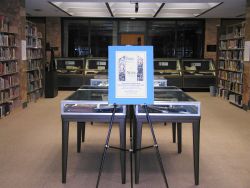 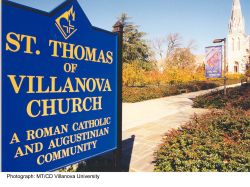 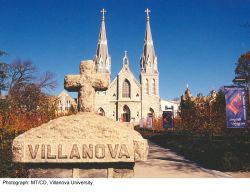 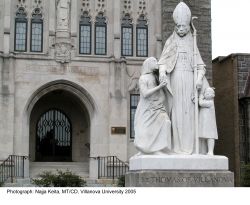 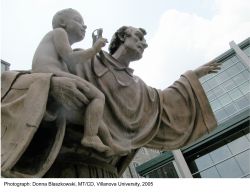 Villanova University was founded by the Augustinians who named it in honor of Santo Tomás García Martínez of Villanueva de los Infantes.  Although St. Thomas was born in Fuenllana, his family home was in Villaneuva and he used that name when he joined the Augustinian Order.  The English word Villanova is based on the Latin form Villanova. 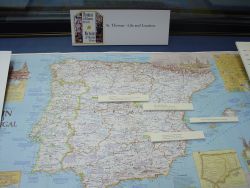 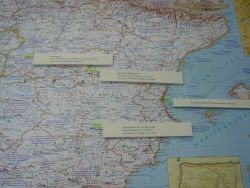 The map is marked to show the following locations :

Valencia where St. Thomas was Archbishop

Salamanca where St. Thomas entered the Augustinian Order and served as professor and prior

Chronology of the Life of St. Thomas (see right)

“How much good one powerful person can do if he is willing to spend his power and wealth fully in the service of the Lord!  How many poor people he can feed!  But the wealthy do not consider the riches of this world to be a gift they have received.  They do not think of themselves as stewards but as lords. Nor are they concerned about the account they will have to render to God.  God will demand an account also from those who enjoy favor with the wealthy if they do not intercede for the poor.” 8th Sunday after Pentecost.

“We are not born for ourselves and the natural gifts and graces we receive are not for ourselves alone, but we have received them for the benefit of all. It pertains to justice that the graces, gifts, knowledge, and skills received as a gift or by one's industry should be used for the common benefit. Therefore, the physicial should not sell his expertise in healing to the poor but visit and cure the needy for free.  If he receives payment from the rich, he does no injury because he needs to make a living by his skill.  Likewise the lawyer should not sell his defense to the poor, nor the priest his prayers.”  4th Sunday after Easter, Sermon 2,3.

Biographies and Portraits of St. Thomas of Villanova

Miguel Salón, OSA, composed the first substantial biography of St. Thomas and published it in 1588, 33 years after the Saint's death.  He revised his biography of the Saint in an edition of 1620. The edition shown here is the fifth of the revised edition.

Shown below are several modern biographies in English, Spanish, and Italian :

Professor Carmen Peraita of Villanova University has published two articles on the life of St. Thomas published in 1620 by the Spanish humanist Francisco de Quevedo.

St. Thomas of Villanova in Art

Most portraits of St. Thomas depict him giving alms to the poor.  He was called "God's Almoner" that is, the person charged with distributing alms in a noble or rich household.  This image is one of a series that are said to represent the “true image” of St. Thomas of Villanova.

The Spanish painter Murillo produced several paintings and sketches of St. Thomas.  Two of them are seen here. Typical of his style is the representation of St. Thomas as a child giving his clothing away to the poor.

This modern representation of St. Thomas by J. Hajnal also shows the Saint giving to the poor.

Works of St. Thomas of Villanova

Four editions of the works of St. Thomas were printed in the 16th century. Fifteen editions followed in the 17th century, five in the 18th century, and two in the 19th Century plus a French translation.

St. Thomas delivered his sermons in Spanish, but in accord with the practice of the time, they were written down in Latin. For the most part, only the Latin texts have survived.

St. Thomas on the importance of preaching:

"The conversion of the world clearly shows how beneficial preaching is, for the world was converted as the voices of the apostles resounded.  And if there is any vitality and force in God's Church today, it is brought about by the continual preaching of the word of God."  Sermon 1 on Sexagesima Sunday.

St. Thomas on his prepartion for preaching:

"I did not grasp this sermon with a sudden insight, but rather I assembled it with great anxiety over many hours, my soul running here and there."  Sermon 1 on St. Michael, Archangel.

16th and 17th Century Editions of St. Thomas of Villanova

This edition of 1581, the oldest in Villanova's collection of St. Thomas’s works, is the second edition of his sermons.  The original 1572 edition published at Alcalá de Henares was prepared by Pedro Uceda Guerrero, OSA, rector of the Augustinian College there.  St. Thomas had left his writings to his friend Juan Mu?atones, OSA, bishop of Segorbe.  He in turn gave them to the Order for publication and Fray Uceda Guerrero was appointed as editor.

The title page shows the coat of arms used by St. Thomas. Augustinian elements are seen in the heart pierced by an arrow representing charity or love.  The image of the pelican wounding herself to feed her young with her own blood symbolizes complete self-giving.

The title pages in all of the editions refer to St. Thomas as the Archbishop of Valencia and as a member of the Order of St. Augustine.  The title page of the 1661 edition also makes reference to his recent canonization by Pope Alexander VII in 1658.

The Brussels edition, prepared by Antonius de Witte, OSA, was published by several printers with a volume appearing every five years.  The edition is important because De Witte collected additional manuscripts with new sermons. Villanova has three of the four volumes.

18th century editions are characterized by beautiful engravings that adorn the title pages and frontispieces.

The page opposite from volume 2 of the Milan edition contains a sermon on the Immaculate Conception.  Very devoted to the Blessed Virgin, St. Thomas composed many sermons in her honor.  He died on September 8, 1555, the feast of the Nativity of Mary.

This edition edited by Laurentius a Santa Barbara, an Augustinian of the Discalced or Reform Branch of the Order, identifies more patristic and other sources than previous editions.

The Manila edition, which incorporates the notes of the 1850 edition but in abbreviated form, has become the standard edition of St. Thomas.

The entire Manila edition of the works of St. Thomas is now available in an English translation in the general collection of Falvey Memorial Library.

A French translation edited by V. Ferrier had been published in Paris in 1866-1868.

Villanova's Tolentine Hall is named in honor of St. Nicholas of Tolentine, the first Augustinian friar to be officially canonized by the pope.  He is depicted in windows in the main church and in the chapel of St. Mary's Hall. Tolentine is the English form of Tolentino, a city found in Le Marche province of Italy, towards the Adriatic coast.

St. Nicholas was an Augustinian friar who combined ascetical practices and  constant prayer with a very active apostolate.  Many favors have been ascribed to his intercession.  He was named the patron of several cities in Italy.  St. Nicholas is usually depicted with a star or sunburst on his chest.  This symbol is derived from a star that he saw marking out Tolentino as the place where he would live and die.  Other symbols are a lily and a book.

Statue of St. Nicholas in the Courtyard at St. Mary’s

All the reliable information we have about St. Nicholas depends on two documents compiled some twenty years after his death in 1305.  One is the biography by his fellow Augustinian Pietro da Monterubbiano.  The other is the information gathered from witnesses by the commission investigating his life and miracles in preparation for his canonization.

Pietro da Monterubbiano wrote his life of St. Nicholas in 1326.  The work remained in manuscript until Boninus Mombritius included it in his collection of lives of the saints published in Milan c. 1479.  Laurentius Surius published a shortened version of the life in his series of lives of the saints in Cologne, 1570-1575. In turn, the Jesuit editors of the “Acta Sanctorum” published a life based on the above two works and some manuscripts.  No modern critical edition of the life exists, but one is in preparation.

Although the process was completed by 1326, St. Nicholas was not canonized until 5 June 1446.  He was the first member of the Augustinian Order to be formally canonized.  This compendium contains a summary of the testimony of the witnesses arranged according to topics.

This work contains a life of St. Nicholas composed by Curtius and based on the life by Pietro da Monterubbiano. It also reproduces an epic poem in Latin, “Nicolaus Tolentinus,” composed by the Carmelite poet, Baptista Mantuanus and first published in 1509.

Recently a late medieval version of the life of St. Nicholas in Icelandic has been transcribed and published. The Icelandic text was based on an old low German text.

The Shrine of St. Nicholas at Tolentino

The shrine of St. Nicholas at Tolentino is characterized by magnificent 14th century frescos and other works of art.  Some examples are seen in this case.  All of the books in this case are found in the Augustinian Historical Institute.

The “Cappellone” or chapel of St. Nicholas at Tolentino.

The Shrine of St. Nicholas in Tolentino, Bologna: 1986.

The Shrine Church at Tolentino

The Cloister of the Monastery at Tolentino

Frescos in the Chapel by Pietro da Rimini. 14th Century

This book contains images of the Ex Voto offerings presented to St. Nicholas.  These are paintings, many done in primitive style, which depict favors received through the intercession of the saint.

Back to Top of Page

Chronology of the Life of Saint Thomas