Collecting of Irish Songs in the 19th Century (Exhibit Case 3)

Irish broadsides in English were published in Ireland in the 19th century, but apparently later than in Scotland. These publications, like their English and Scottish counterparts, were a mixture of the traditional, the newly popular, and the recently composed.  One printer of Irish broadsides, P. Brereton, became well known to subsequent generations for the charm of his broadsides but also for the typographical errors that characterized his work.

A New Song called Wire In and Get Your Tea-Pot.

The Bard of Armagh.


Irish chapbooks also flourished, although they were less common than those in Scotland and England. The displayed chapbooks are all from Falvey Memorial Library’s Special Collections.


The Royal Blackbird. To which are added The Drunken Wife.
The King’s Country Sportsmen. Away to the Mountains Brow.
Waterford: Kelly’s, [1830-1850?]

Paudien O’Rafferty. Together with The Coronation. What’s the Use of Fretting. The Sun that lights the Roses.
Dublin: Printed at the wholesale and retail book and stationary warehouse, [1830-1850?]

Nice Young Maidens. Together with The Minstrel Boy. The Orphan Boy. Hope Told a Flattering Tale. Smart Young Bachelors.
Dublin: Printed at the wholesale and retail book and stationary warehouse, [1830-1850?]

Charms of Melody, or Siren Medley; being the most extensive Collection of Love, Sentimental, War, Hunting, Bacchanalian, Humerous, and Political Songs, Old English, Scotch and German Ballads, Legendaries, etc. ever brought together in a Single Publication, selected from the Best and most Admired Writers.
Dublin: J. and J. Carrick, [1818] 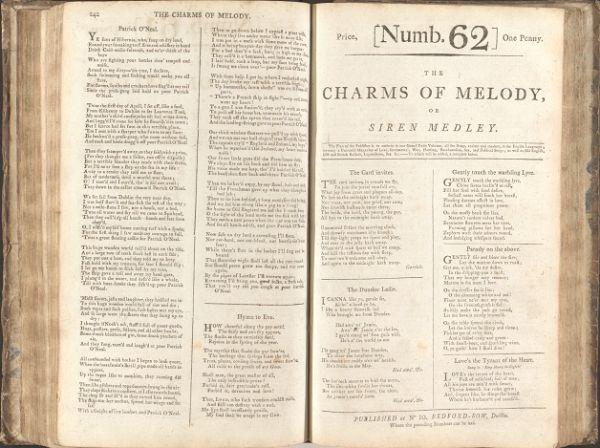 A reprinted collection of 100 four-page songsters that were published between 1795 and 1810. Songsters of the type that flourished in Scotland and England do not seem to have been as prevalent in Ireland but this volume is an early exception.