The Beginnings of Academic Collecting of Folksongs (Exhibit Case 1)

Thomas Percy (1729-1811), scholar and Church of Ireland bishop of Dromore, rescued an old manuscript containing much older songs and ballads just as it was about to be used by a servant to keep a fire going. This led to the 1765 publication of Reliques of Ancient English Poetry which was a literary version – i.e., an “improved” version - of the songs and ballads in the manuscript. Today making such “improvements” without indicating that revisions had been made would not be considered scholarly methodology. A century later, the original text of the songs was published in the three volume scholarly edition shown in this case.  Because of Victorian sensibilities, songs deemed too indelicate were published in a separate volume entitled Loose and Humorous Songs. The publication of Percy’s Reliques in 1765 was a major landmark in the publication of books devoted to older ballads and songs.

These volumes are from a later edition of a popular collection of broadside ballads brought together by Samuel Pepys (1633-1703).

Chapbooks and songsters were another means of distributing the words of popular songs. Chapbooks were cheaply printed smaller books containing stories, poems, religious texts, and songs.  Some chapbooks, often entitled “Garlands,” were devoted exclusively to songs, setting forth the words without any music, but often with a subtitle stating the name of the tune that should be used for the song.  Garlands were often printed on one sheet of paper; the paper was then folded into eight pages to make a book.  Illustrated in the exhibition are a single unfolded sheet and a folded sheet.

Sometimes collectors of Garlands bound them into a book.  An example of this is seen in this volume of 30 garlands bearing the bookplate of Mary and Henry Ponsonby. Henry Ponsonby was private secretary to Queen Victoria.

In general, songsters aimed at the transmission of popular songs, but since some traditional songs were chiefly sung, and hence popular, there was no clear line of demarcation between traditional and recently composed popular songs.  Some songsters had Irish content, but, as with other subjects, collections were often a mix of the traditional, the newly popular, and the recently composed. A popular theme in these songsters was the portrayal of a stereotypical “stage Irishman.”

The Victoria Songster for 1839, being a Choice Selection of all of the Popular Songs of the Day.
London: Joseph Sanders, 1839

Thrush, a Choice Selection of the Most Admired Popular Song.
London: Richardson, [ca. 1820-40]

Paul Pry’s Budget of Harmony for the Year 1828, Being a Careful Selection of all the Prying, Whimsical, Funny, Comical, and Serious Songs, Glees, and Catches. London: J. Smith, n.d.

Bound with: National Songster, Comprising a Choice Selection of Popular New Songs, including Those now Singing at the Theaters Royal. London: B. Jones, 1831 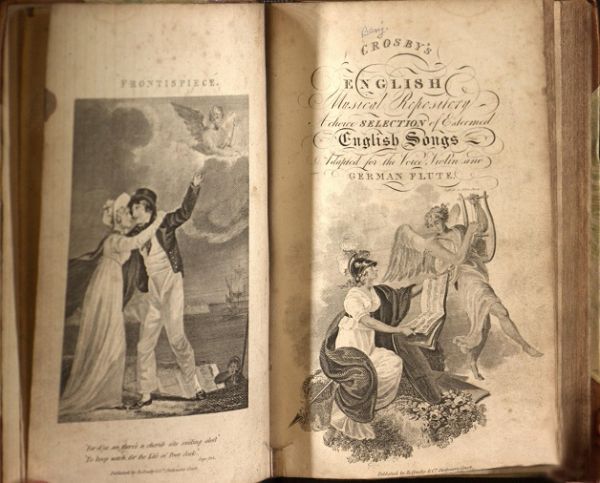 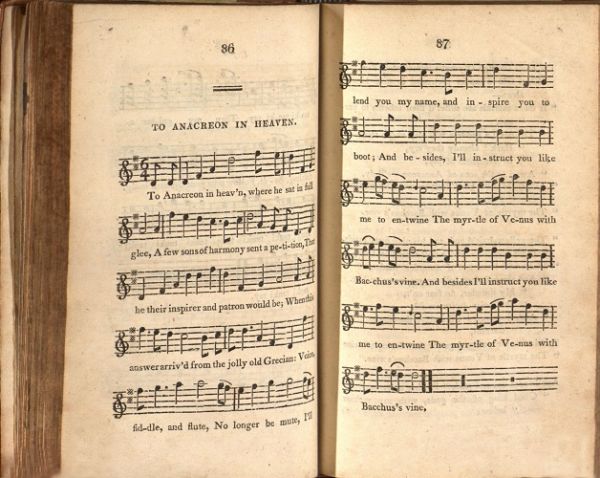 The tune to Anacreon in Heaven.

The late 1700s and early 1800s saw the publication of collections of popular songs. Some were described as containing “the esteemed English, Irish, and Scotch songs…as sung at the theaters and convivial parties.”  Crosby’s… Musical Repository represents this type of publication.