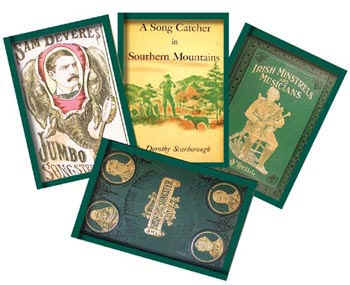 A Celebration of Traditional Music of Ireland & Elsewhere in Print

An exhibit of material from the collection of

A Celebration of Traditional Music of Ireland and Elsewhere in Print.

Selections from the Collection of Professor Lewis Becker, Villanova University School of Law

This exhibition aims to illustrate high points in the history of the collection and transmission of popular and traditional songs and music.  The distinction between what is viewed as traditional and what is viewed as popular can become blurred, particularly in instances where once popular songs, after the passage of time, come to be referred to as traditional.  Nevertheless, for the purposes of this exhibition, traditional music refers to songs and music that have been sung or played over the course of generations, often passed on by oral communication. Popular music refers to songs of a more temporal nature, with identifiable composers and published for commercial means.

Consistent with Villanova University’s long-standing connections with Ireland, the primary emphasis is on songs and music of Irish content, but analogous developments in the collection and distribution of music in England, Scotland, and the United States are also treated.  The material in this exhibition is drawn almost exclusively from the collection of Lewis Becker, Professor of Law at Villanova University, but has been supplemented on occasion by material from Falvey Memorial Library’s Special Collections.

History and Song are One
(Introductory Exhibit Cases)

One of the themes in this exhibition is the unity between political events and the origin of songs, especially in the Irish context. This case contains a striking example.

Below is a page from a bound volume of news clippings related to the 1916 trial for treason of Sir Roger Casement (1864-1916).  Casement, who was born in Ireland, became a British consul and was knighted for his humanitarian service in 1911. He became involved in Irish nationalism and joined the Gaelic League in 1904. Later Casement took an active part in the movement for Irish independence and joined the Irish Volunteers in 1913. In March 1916, he visited Germany in an effort to gain support for the Irish rebellion. Upon returning from this trip he landed at or near Banna Strand, County Kerry and was arrested by the British. Casement was convicted of high treason and executed on August 3, 1916. In 1965, his remains were removed from England and reinterred in Ireland.

Coupled with this volume of news clippings is a book, Irish Songs of Resistance, containing Lonely Banna Strand, a song about Casement, discussed in the chapter aptly entitled History and Song are one.

Bound Volume of News clippings about the Trial and Execution of Sir Roger Casement in 1916.

Another example of the unity between history and song is the broadside entitled “De Philadelphia Riots”. Despite the racist and stereotypical dialect, the broadside focuses on the battles in Philadelphia in 1844 between the Irish population and the anti-Irish (and anti-everything else) Nativists, which directly resulted in the burning of St. Augustine’s Church in Philadelphia and the subsequent growth and expansion of Villanova College.

The Killing of Thomas Keating. An Address from the Irishmen of Washington City to the Citizens of the United States. S.l., n.d.
Anti-Irish sentiments pervaded even the highest ranks of government, as can be seen in this seven-page pamphlet. It protested the acquittal, in 1856, of California Congressman Philemon T. Herbert. He had been accused of killing Keating, a waiter at the Willard Hotel, because Keating would not get him breakfast. Herbert called Keating a “d___d Irish son of a bitch.”

The American Sailor’s Songster.
Philadelphia: Fisher and Brother, n.d.
This songster contains two songs about the riots of 1844, both from the Nativist point of view: The Kensington Tragedy and the Southwark Riots