The 1798 rising occurred in the spring and summer and involved between 30,000 and 50,000 insurgents and around 76,000 government troops. There were two main centers of rebellion: in Eastern Ulster, where the insurgents were decisively defeated at Antrim and at Ballynahinch, and in South Leinster, where the critical rebel defeat occurred at Vinegar Hill (Co. Wexford) on 21 June. A French landing, at Killala (Co. Mayo) in August, came too late to assist the Irish insurgents, and was defeated at Ballinamuck (Co. Longford) within a week of arriving. The rising cost perhaps 30,000 lives. (The Oxford Companion to British History. Oxford, New York: Oxford Univ. Pr., 1997). 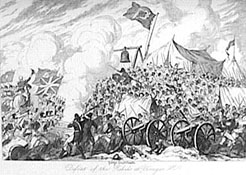 Maxwell, W. H.
History of the Irish rebellion in 1798; with memoirs of the union, and Emmett's insurrection in 1803 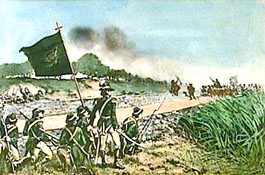 Battle of Killala. From an original drawing by B. Thompson. 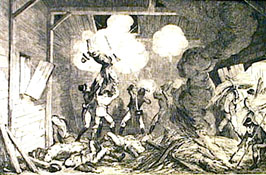 Incident of the Rebellion in Wexford. Drawing by George Cruikshank. 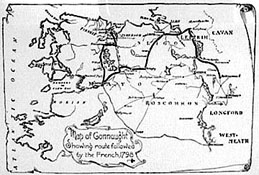 Gribayedoff, Valerian
The French Invasion of Ireland in ?98

Map of Connaught showing route followed by the French in 1798.

Other Titles in the Display

Cloney, Thomas.
A Personal Narrative of those Transactions in the County Wexford, in which the Author was engaged, during the awful Period of 1798, interspersed with brief Notices of the principal Actors in that ill-fated, but ever-memorable Struggle, with Reflections, moral, political and historical.
[Dublin, McMullen, 1832]
Subtitle: To which is added, An Appendix, containing a full and interesting Report of the Author's Trial by Court-Martial, which lasted by Adjournments, for fourteen Days. Thomas Cloney (?-1850) was falsely accused of being a United Irishman. This book attempts to show how the government's strong reaction against the uprising might have driven many to sympathize with the rebels.

Hancock, Thomas.
The Principles of Peace, exemplified in the Conduct of the Society of Friends in Ireland, during the Rebellion of the Year 1798.
[Philadelphia, T. Kite, 1829]
Thomas Hancock, M.D. (1783-1849). This book displays the courage of the Quakers in their refusal to be drawn into violence on either side of the conflict. "Of the many histories of the rebellion this, based entirely on the statements of eye-witnesses, gives the clearest view of the unsettled, varied and ignorant notions of the great mass of the insurgents." (Dictionary of National Biography)

Musgrave, Richard.
Memoirs of the Different Rebellions in Ireland, from the Arrival of the English: Also a particular Detail of that which broke out the XXIIID of May MDCCXCVIII; with the History of the Conspiracy which preceded it; and the Characters of the Principal Actors in it.
[Marchbank for John Milliken..., 1801]
Sir Richard Musgrave (c.1757-1818), member of the Irish parliament. Musgrave's history was the first Loyalist account of the 1798 Rebellion published . "The Memoirs... a work so steeped in anti-catholic prejudice as to be almost worthless historically." ( Dictionary of National Biography) The appendices (106 pages) contain copies of important primary source documents.

Wheeler, Harold Felic Baker.
The War in Wexford.
[London; New York: John Lane, 1910]
Subtitle: An Account of the Rebellion in the South of Ireland in 1798 told from original Documents by ... with numerous Illustrations reproduced from contemporary Portraits, Prints, etc.