The Development of Monastic Life Case 1 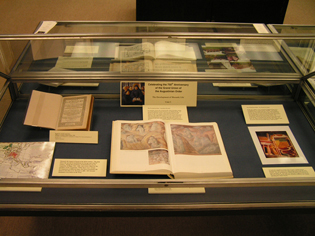 Monastic life began in Egypt in the third century. The map shows the spread of monasticism in Europe up to the 9th century. Among the promoters of monasticism was St. Augustine of Hippo (354 – 430), who wrote a Rule for the members of his community. While there were various developments at different times, the form of monastic life based on the Rule of St. Benedict (c.480 – 547) became dominant everywhere in the West.

Illustration from:
Price, Lorna. The Plan of St. Gall in Brief: an Overview based on the 3-volume work by Walter Horn and Ernest Born. Berkeley: University of California Press, 1982. (Falvey Memorial Library)

The Rule is accompanied by commentary by Hugo of St. Victor and Humbert of Romans, O.P. (Special Collections)

In monastic circles the eremitical life of the Egyptian monks was much admired as the ideal form of religious living. An idealized depiction of these early hermits is found in the frescos by the 15th century artist Nanni di Pietro in the cloister of the Augustinian monastery of Lecceto near Siena. Near the end of the 10th century a revival of the eremitical form of monasticism spread through Italy and France. In contrast to the large and wealthy Benedictine monasteries, the hermits of this period lived together in simple housing in rural and remote locations.

In the 12th century a new concept of religious living arose exemplified by St. Francis and St. Dominic. The groups founded by these Saints and others were called mendicant because they derived their food and other necessities from freewill offerings in contrast to the Benedictine monasteries that obtained their income from large estates. The mendicants espoused the ideal of strict poverty and service to the people by preaching and hearing confessions. The Holy See approved these groups because they supplied what the poorly educated parochial clergy could not give.

At Assisi the magnificent shrine of St. Francis contains frescos attributed to Giotto (1216-1337) illustrating events in the life of St. Francis. The one exhibited here depicts the legend of the dream of Pope Innocent III. The Pope was reluctant to approve the way of life of St. Francis, but he then had a dream in which he saw Francis upholding the whole Church.

Prehistory of the Augustinian Order Case 2 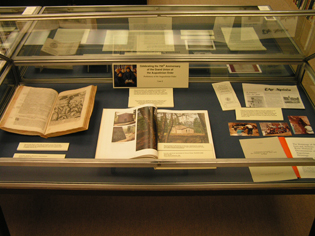 The present Order of St. Augustine was formed in 1256 by uniting several groups of hermits into one Order. Some were already organized as Orders. In other cases there were individual monasteries not united in any larger organization.

Blessed John Bonus (1169-1249), the founder of one of the groups that comprised the new Augustinian Order, had been a jester before becoming a hermit. He attracted followers who were organized into a religious order in 1217.

The hermitage at Monticiano in Tuscany, which had its origin in 1238, illustrates the rural character and modest proportions of the pre-union eremitical foundations.

A exhibit concerning these excavations was held in Falvey Memorial Library in 1997. 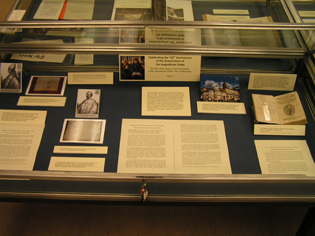 The unification of the hermit groups into one Order began in 1243 when representatives of the various hermit communities of Tuscany were summoned by Pope Innocent IV to meet in Rome in order to form a union. The same pope confirmed their unification into the Order of the Tuscan Hermits of St. Augustine in 1244.

The bull Incumbit Nobis, issued by Pope Innocent in 1243, summoned the Tuscan hermits to Rome. This document is preserved in the General Archive of the Augustinian Order in Rome. The large 1244 written on the bull is a secretarial error.

By 1256 the Holy See decided to unite other hermit groups living in northern and central Italy with the Tuscan Hermits into a new Order. Among the reasons for the union were the similarity of name and life-style and the fact that all except the Williamites and a few others already followed the Rule of St. Augustine. Representatives were called to Rome by the Pope to hold a chapter (meeting) to vote on their acceptance of the papal wish and the basic structure of the new Order. The bull Licet Ecclesiae Catholicae, issued by Pope Alexander IV in 1256, confirmed the proceedings and, in effect, created the new Order, the Hermits of St. Augustine. With the unification of the Order, the nature of the Order changed inasmuch as it now took on the characteristics of a mendicant order and began to open new foundations in urban areas.

The 1256 bull of Pope Alexander is preserved in the General Archive of the Augustinian Order in Rome.

The portraits of the popes are based on a series of engravings published in Giovanni Battista Cavalieri: Pontificum Romanorum Effigies, Rome, 1580.

(The displayed images are from reproductions in Montor, Artaud de. The Lives and Times of the Popes. New York: The Catholic Publication Society of America, 1910-1911.) (Falvey Memorial Library)

The Roman church, Santa Maria del Popolo, was the site of the 1244 and 1256 unions. The Church was given to the Tuscan Hermits and passed to the care of the Order. In 1472 the original medieval church was completely renovated in the Lombard style. The Augustinians continue to care for the church, which contains many important artistic monuments.

This edition has marginal notes and indices by Nicolaus Crusenius.

Spread of the Order to England and Ireland Case 4 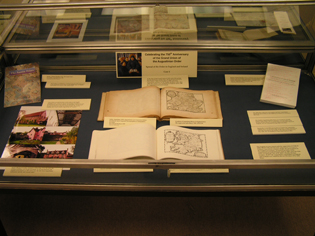 At the time of the Grand Union in 1256 some of the groups already had houses outside Italy. Of special interest to us is Clare Priory, which was founded in 1248, as the first Augustinian monastery in the English speaking world. After 1256 other friaries were established in England, and in 1280 the Augustinians arrived in Ireland.

In the middle ages the English Augustinians were known the Austin Friars.

The English province lasted until the suppression of 1538-39 under Henry VIII, but the Irish Augustinians managed to continue a precarious existence despite the persecutions by the English government. Permanent presence of the Augustinians in England began again in 1865 when the Irish friars accepted the care of St. Mary's Parish, Hoxton, London. In 1977 the Augustinian communities in England and Scotland were united in the new Province of St. John Stone.

Clare Priory was the first house of the Order in the English-speaking world. While the date of its foundation in 1248 is established, it is not known whether the founding Augustinians were the Tuscan Hermits or the Followers of John Bonus. At any event, the house became part of the new Order in 1256. The present buildings show traces of their origin in the 14th century.

The priory was dissolved on 29 November 1539 and passed into the hand of Richard Frende, trumpeter of the king. Over the years the existing buildings were in private hands. It was purchased by the English Augustinians in 1953 and is now the site of an Augustinian community, parish, and retreat center.

Locations of Augustinian Houses in England before the suppression under Henry VIII, 1538-1539.

Locations of Augustinian Houses in Ireland before the suppression under Henry VIII and subsequent governments. 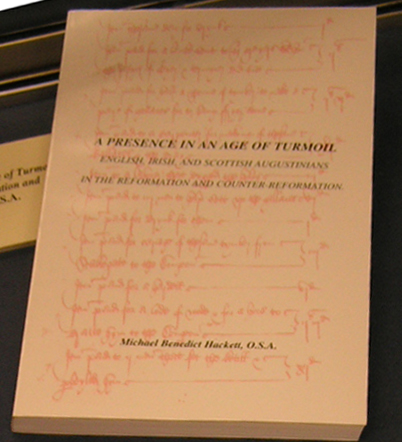 Hackett, Michael Benedict, O.S.A. A Presence in an Age of Turmoil: English, Irish, and Scottish Augustinians in the Reformation and Counter-Reformation. Edited by Karl A. Gersbach, O.S.A.

The English Augustinian John Stone was executed in a brutal manner under Henry VIII at Canterbury on 27 December 1539 because he had refused to accept the king as head of the Church in England. He was canonized by Pope Paul VI in 1970.

During the Cromwellian persecution in Ireland, the Augustinian William Tirry was arrested while saying Mass on Holy Saturday in 1654 and was hung for his loyalty to the Faith at Clonmel on 12 May 1654. He was beatified by Pope John Paul II in 1993.

In 1998 Clare Priory celebrated the 750th anniversary of its foundation.  A small booklet was published to commemorate the event.

From Ireland to the United States and Villanova Case 5 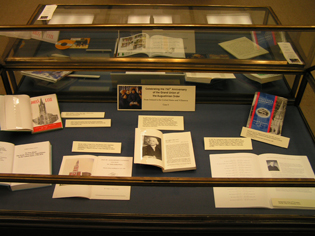 In 1796 Father Matthew Carr (1755-1820) came from Dublin to begin the Order in the United States. He established St. Augustine Church in Philadelphia, the Order's first foundation in the United States. The presence of the Augustinians in this country was very tenuous at first. The first American to join the Order was Michael Hurley (1750-1837). Fortunately, other friars from Ireland came to help and the Order grew.

In 1841 the Augustinians paid a total of $21,400 for the purchase of the Belle-Air estate on which Villanova stands. The official date of the foundation of Villanova College is 1842, but classes actually began in 1843. The name was changed from Villanova College to Villanova University in 1953.

John's Lane is the popular name for the principal Augustinian friary in Dublin. It was from here that Matthew Carr set out for the United States in 1796.

The late Arthur J. Ennis, O.S.A., first Director of the Augustinian Historical Institute, was an expert on the early history of the Augustinians in the United States. Several of his publications are presented here. Villanova University’s Ennis Fellowships are named in his honor. 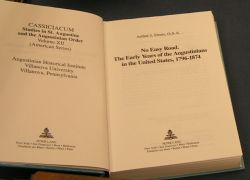 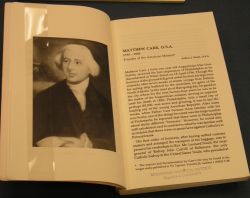 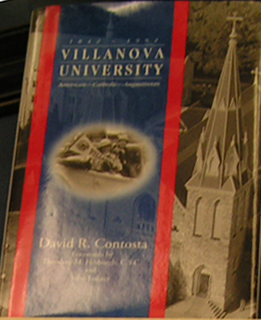 The Augustinian Order at the Present Time Case 6 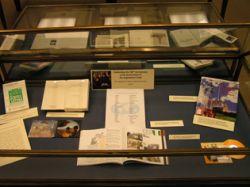 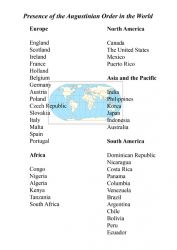 From the Constitutions of the Order of Saint Augustine

The purpose of our Order consists both in our seeking and worshipping God together with one heart in brotherhood and spiritual friendship and in our working to serve the people of God. As the Rule admonishes us, the main reason for our having come together is to live harmoniously, intent upon God in oneness of mind and heart. Moreover, since the principle by which hearts are made one is none other than an intimate union with Christ in his body which is the Church (Col 1:24), whose members we are and to whose service we are dedicated, we must, if we wish to love Christ, spread charity abroad to the whole world, "for the members of Christ are scattered throughout the world." This idea of Saint Augustine finds a splendid commentary in these other words of his: "If you love God, win all others to his love. Win as many as you can, exhorting, bearing up with them, praying, discussing, giving reasons, but gently, calmly; win them for love."

The newest province of the Order is found in Nigeria. Missionaries from Ireland helped to establish the Order there as in the United States.

The Spanish Provinces of the Order have labored in Latin America from their arrival in Mexico in 1533 until the present time. 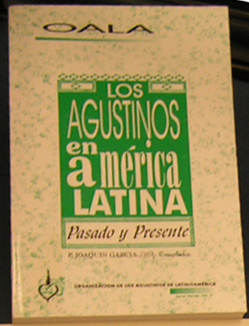 Since 1964 the American Augustinian Provinces have engaged in missionary work in Northern Peru. They are now joined by native Augustinian Peruvians.

Besides their work in higher education and parochial ministry, Augustinians in the United States are engaged in conducting secondary schools. Among its students Villanova University counts many graduates of Monsignor Bonner High School in Philadelphia and Malvern Preparatory School. 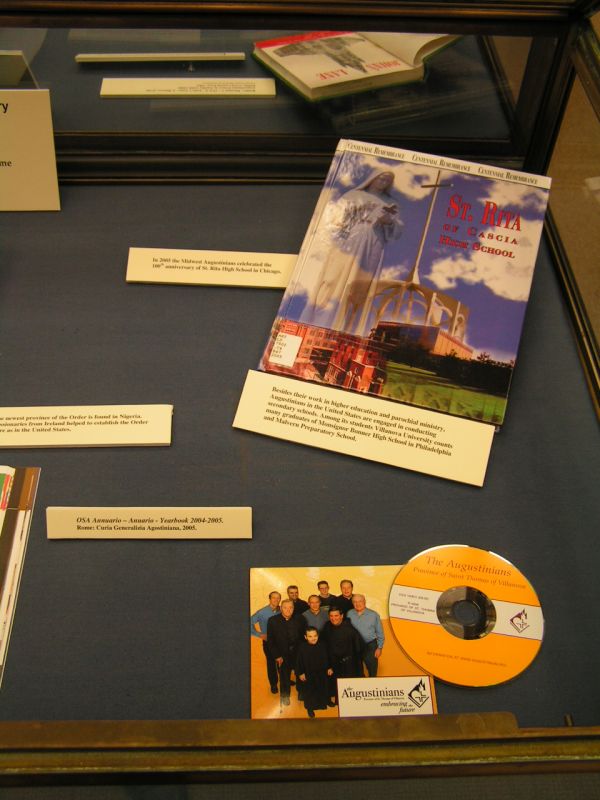 In 2005 the Midwest Augustinians celebrated the 100th anniversary of St. Rita High School in Chicago.