Commemorating 500 Years of the Complete Works of Saint Augustine

Back to The Maurist, Migne and Caillau Editions

In the 17th century the French Benedictine congregation of St. Maur edited many works of ecclesiastical writers of the patristic period. The Maurists, as they are known, made a special effort to utilize more manuscripts to obtain a better text. The 11 volume edition of St. Augustine, published in Paris from 1679 to 1700, represented a marked improvement over the previous editions. Although modern critical editions for individual works have appeared since, the Maurist edition remains as the last critical edition of the Complete Works of Augustine. The Maurist edition was frequently reprinted.

Operum Tomus Primus [-Duodecimus]… 12 vols. Antwerp: Sumptibus Societatis, 1700-1703. This is the ninth Maurist edition. The note above the illustration indicates that that this set was purchased in 1713 by Fr. Cajetan Riesch, prior of the Augustinian house at Ratisbon, Germany. Vol. 11. (Special Collections) 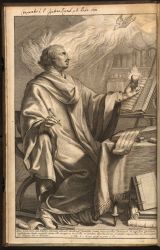 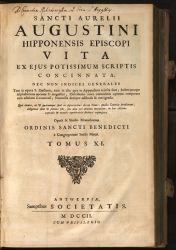