500 Years of the Complete Works of Saint Augustine

The first work of St. Augustine to be printed was the City of God (De Civitate Dei), published at Subiaco in 1467. Johann Amerbach (c. 1440-1513) began publishing individual texts of Augustine in 1489. After deciding to publish all of the works, he began the task of obtaining copies of German and French manuscripts. The 11 volume edition, which he published together with Johann Froben and Johann Petri, was completed on 22 January 1506. To save on the cost of the edition, Amerbach did not reprint three lengthy works he had just printed a few years before, such as the Commentary on the Psalms. He was, however, the first to publish the entire Augustinian corpus, and his texts became the basis for all subsequent editions of the Complete Works (Latin: Opera omnia) of Augustine.

Incunables - (Latin: Incunabula = ‘things in the cradle’) is the term used to describe books produced in the infancy of printing, before 1501.

Title pages – 15th century books frequently have no title pages but may begin with a table of contents or simply the first page of text. At some point simple title pages were introduced. Today we would refer to these as half-title pages, and they would come after the main title page. Title pages as we know them came into use in the early 16th century.

The original works may be consulted in Special Collections.

Colophon - Information placed at the end of early printed books. The colophon contains the name of the printer, date, and place of publication and sometimes the title, author and person sponsoring the edition. This practice enables us to know the exact day that the printer finished.

Gloss - Medieval manuscripts especially those with legal and theological content often had commentary written around the main text. This practice was carried over by early printers.

Woodcut - Before the art of engraving on metal was invented, pictures were engraved on wooden tablets. Colors could be added by hand later on, but there are also examples of printing in colors.

Handpress - The early printing presses were adapted from wine presses. Each page had to be pressed one by one against the type that was coated with ink. Amerbach's edition of St. Augustine (1,200 copies of more than 2,000 folios, i.e. sheets of paper) required more than 4,800,000 pressings!

The famous humanist, Desiderius Erasmus (1469-1536), was the first to prepare an edition of the Complete Works based on the work of Amerbach but including the three works omitted in Amerbach's 1506 version. Besides correcting errors in the previous edition, Erasmus added his own observations. This ten volume edition of Augustine's works was printed by the firm of Johann Froben and appeared in Basel from 1528 to 1529. It was reprinted several times by Froben's firm and by other publishers.

Theological scholars at the University of Louvain in Belgium edited a revised edition of the Complete Works published from 1567 to 1577 in Antwerp by Christopher Plantin. The edition included letters and sermons not published before as well as new commentary on the texts. This work was also reprinted several times by Plantin and by other publishers.

Operum. Primus [-Decimus] Tomus…10 vols. Cologne: Sumptibus Antonii Hierat, 1616. This edition also contains a commentary on the De Civitate Dei by the French Augustinian, Léonard Coquée (d. 1615). Falvey Library’s Special Collections owns volumes 3-10. These volumes were part of the collection in the Library of St. Augustine’s in Philadelphia and survived the 1844 riots and the fire that burned St. Augustine’s church and rectory. Vol. 5. (Special Collections)

In the 17th century the French Benedictine congregation of St. Maur edited many works of ecclesiastical writers of the patristic period. The Maurists, as they are known, made a special effort to utilize more manuscripts to obtain a better text. The 11 volume edition of St. Augustine, published in Paris from 1679 to 1700, represented a marked improvement over the previous editions. Although modern critical editions for individual works have appeared since, the Maurist edition remains as the last critical edition of the Complete Works of Augustine. The Maurist edition was frequently reprinted.

Operum Tomus Primus [-Duodecimus]…12 vols. Antwerp: Sumptibus Societatis, 1700-1703. This is the ninth Maurist edition. The note above the illustration indicates that that this set was purchased in 1713 by Fr. Cajetan Riesch, prior of the Augustinian house at Ratisbon, Germany. Vol. 11. (Special Collections)

Jacques-Paul Migne (1800-1875), a French priest, published various series of theological works to provide inexpensive editions for the clergy and other interested persons. Of particular importance were the two series of the works of the Latin and Greek Church Fathers and early medieval ecclesiastical writers: the Patrologia Latina in 221 volumes, published in Paris, 1844-64, and the Patrologia Graeca in 161 volumes, published in Paris, 1857-1866. For the most part, Migne reprinted the best available previously published texts. In the case of Augustine (PL 32-47), he used the Maurist edition with a few new manuscript readings. Migne's work soon became the standard for reference to Augustine's works, e.g. PL 32: 659 = Patrologia Latina, volume 32, column 659.

A few years before Migne began his great edition of the Church Fathers, the publication of a series of patristic authors was undertaken by A. B. Caillau in collaboration with Mgr. Guillon. The series was suspended at the announcement of Migne's Patrologia Latina, but the Collected Works of Augustine were completed. 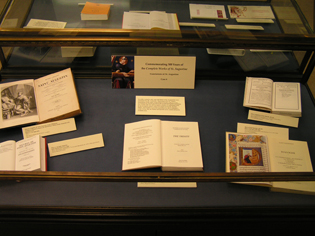 The two leading series of modern critical editions of Latin Patristic works are the Corpus Scriptorum Ecclesiasticorum Latinorum which began in 1866 and the Corpus Christianorum which began in 1953. In these series are included critical editions of St. Augustine, but neither has all of the texts as yet. Editions are called critical because they are based on a study of the available manuscripts. The Austrian Academy of Science has undertaken the preparation of a listing of all of the known manuscripts and fragments of Augustine, which will probably reach a total of more than 10,000 items. 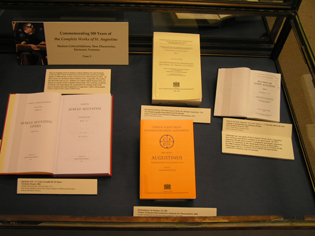 Although one can speak of the Complete Works of St. Augustine, new sermons and letters continue to be discovered. In 1975 Johannes Divjak discovered 27 completely previously unknown letters of Augustine in the Municipal Library of Marseilles. In 1990 François Dolbeau discovered a group of sermons at the Municipal Library of Mainz, 26 of which were previously unknown or known only in excerpts.

Electronic editions of the works of Saint Augustine are now available on the internet or on CD-Rom. Several of these electronic editions are databases where it is possible to search for specific words and phrases in the texts. Falvey Memorial Library subscribes to several such databases:

Past Masters (Online). Charlottesville, VA: InteLex Corp., 1996- .
This database includes The Works of Saint Augustine: A Translation for the 21st Century (in English) and the CAG database (in Latin).

Sant'Agostino (Online). www.augustinus.it.
On this website the Italian Province of the Augustinian Order makes available the works of Augustine in Latin and Italian without the need for subscription. The website also provides a search engine and information relating to St. Augustine as well as digital images of the saint.

In earlier centuries only some individual works of Augustine were translated into the vernacular. Beginning in the 19th century translations of the entire corpus began in France with two series. In England the Oxford movement also produced English translations of a considerable but still incomplete number of Augustinian texts. In the twentieth century series were begun in French, Spanish, Italian, and English to provide translations for all of Augustine's works. So far only the Italian and Spanish series contain all known available texts.

The Works of Saint Augustine: A Translation for the 21st Century.
Hyde Park, N.Y.: New City Press, 1997- .
This English translation does not have the corresponding Latin text.
(Falvey Memorial Library)