“In 1862 President Abraham Lincoln signed creating the U.S. Department of Agriculture (USDA), which included a Division of Chemistry (renamed the Bureau of Chemistry in 1901). . . . Harvey Wiley (1844–1930), chief chemist at the USDA from 1883 to 1912 and the "Father of the Pure Food and Drug Law.  Convinced that many food and drug businesses were placing profits ahead of public health, Wiley hired idealistic young chemists, who were nicknamed the "Poison Squad," to study how chemical additives in foods affected health.” [Paradowski, 771-72]

Charles William Post’s advertising slogan, in 1895, for the Postum cereal beverage he created was, "Health First—Happiness Follows, POSTUM instead of coffee, 'There's a Reason."' … In writing advertisements for his product, Post brazenly blamed caffeinated beverages for any ailment, including heart disease, rheumatism, blindness, cowardliness, and diminished mental capacity. He literally scared thousands of caffeinated beverage drinkers into switching to Postum.” ["Postum Cereal …” 808-09] 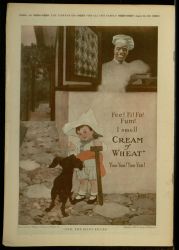 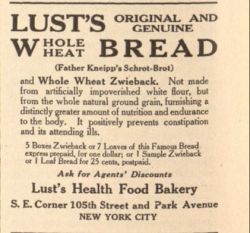 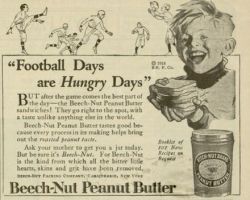 In his New Yorker blog, "A Chunky History of Peanut Butter, in 2012, Michaud wrote, “Peanut butter, the everyman staple, which contains neither butter nor nuts (peanuts are legumes), originated as a health food of the upper classes. First created for sanitariums like John Harvey Kellogg’s Western Health Reform Institute, it satisfied the need for a protein-rich food that did not have to be chewed. Wealthy guests at those institutions popularized it among the well-heeled. But there were economic pressures to expand peanut-butter consumption more democratically.” [Michaud]

The Gale Encyclopedia of U.S. Economic History, published in 1999, an article on the history of the Borden, Inc., which included, “ . . . Gail Borden Jr., an amateur inventor,  . . . discovered he could prevent milk from souring by evaporating it over a slow heat in a vacuum. Believing that it resisted spoilage because its water content had been removed, he called his revolutionary product "condensed milk." As French chemist and microbiologist Louis Pasteur (1822–1895) later demonstrated, however, it was the heat Borden used in his evaporation process that kept the milk from spoiling because it killed the bacteria in fresh milk. After receiving a patent from the U.S. Patent Office on August 19, 1856 . . . After the war, the New York Condensed Milk Company had a ready-made customer base among both Union and Confederate veterans. To distinguish this product from its new competitors, Borden adopted the American bald eagle as his trademark.” [Borden, Inc. 109]

In his article about Swift's, author Kutner wrote, in the Handbook of Texas Online, “ . . . Swift's technological innovation enabled his company to deliver fresh meat from meat-packing centers in the Midwest to large urban markets in the Northeast. . . The Federal Meat Inspection Act of 1906 constituted the first industry regulation, and legislation to regulate stockyards passed fifteen years later. . . “ [Kutner] 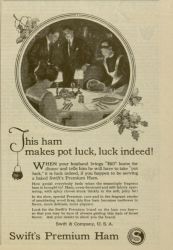 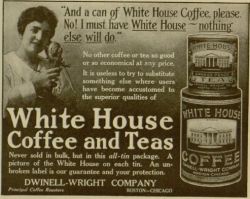 In his article for New England Magazine, published in 1906, author Herbert Churchill praised the Dwinell-Wright company’s product and manufacturing practices, when he  wrote, “This may be designated as the model enterprise of the kind in America, if not in the world, and its principal product, White House Coffee, is undoubtedly the purest and most perfect blend of coffee that can be obtained.  It has made the expression ‘Boston Roasted Coffee’ a synonym for perfection in every home and public place where good coffee is the uniform role.” [Churchill 255]

They [marketers] aimed not only to impress brand loyalty on future generations of consumers but to enlist children as their selling agents within the home. . ." [Jacobson]